New Paper: Lifespan Benefits for the Combination of Rapamycin plus Acarbose in mice

Mice bred in 2017 and entered into the C2017 cohort were tested for possible lifespan benefits of (R/S)-1,3-butanediol (BD), captopril (Capt), leucine (Leu), the Nrf2-activating botanical mixture PB125, sulindac, syringaresinol, or the combination of rapamycin and acarbose started at 9 or 16 months of age (RaAc9, RaAc16). In male mice, the combination of Rapa and Aca started at 9 months and led to a longer lifespan than in either of the two prior cohorts of mice treated with Rapa only, suggesting that this drug combination was more potent than either of its components used alone. In females, lifespan in mice receiving both drugs was neither higher nor lower than that seen previously in Rapa only, perhaps reflecting the limited survival benefits seen in prior cohorts of females receiving Aca alone. Capt led to a significant, though small (4% or 5%), increase in female lifespan. Capt also showed some possible benefits in male mice, but the interpretation was complicated by the unusually low survival of controls at one of the three test sites. BD seemed to produce a small (2%) increase in females, but only if the analysis included data from the site with unusually short-lived controls. None of the other 4 tested agents led to any lifespan benefit. The C2017 ITP dataset shows that combinations of anti-aging drugs may have effects that surpass the benefits produced by either drug used alone, and that additional studies of captopril, over a wider range of doses, are likely to be rewarding.

Here, we extend this strategy, testing rapamycin and acarbose in combination, starting at 9 or 16 months of age, based on a similar rationale to that used for the metformin/rapamycin trial.

Rapamycin plus acarbose, starting at 9 months of age (RaAc9) . This combination of agents produced a 28% increase in median lifespan in females (p < 0.0001) and a 34% increase in males (p < 0.0001) for data pooled across sites (Figure 1). This was the only treatment that significantly increased survival in both sexes at all three sites tested separately.

Captopril, sold under the brand name Capoten among others, is an angiotensin-converting enzyme (ACE) inhibitor used for the treatment of hypertension and some types of congestive heart failure. Captopril was the first oral ACE inhibitor found for the treatment of hypertension. It does not cause fatigue as associated with beta-blockers. Due to the adverse drug event of causing hyperkalemia, as seen with most ACE Inhibitors, the medication is usually paired with a diuretic. Captopril was patented ... 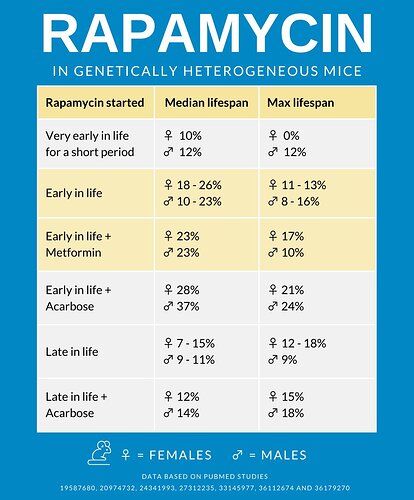 How should we take Acarbose? I don’t know anything about this drug. Should it be a dose before a carby meal? A dose early in the morning? Late at night? What dosage should be taken? Thanks for the help as I am considering adding this drug.

I’ll be making an Acarbose guide hopefully within the next few days. Including its metabolic benefits, Dosing, Methods to enhance the efficacy, And its limitations in blunting glucose spikes and potential pitfalls.

Are you taking acarbose and/or rapamycin? If yes, what dose regime are you using?

How should we take Acarbose? I don’t know anything about this drug. Should it be a dose before a carby meal?

Yes - its dosed every meal, with the first bite of the meal. It lasts/is effective for about 2 hours after you take it. Dosing is 25mg to 50mg to 100mg tablets. Read this thread: Acarbose - Details On Another Top Anti-Aging Drug