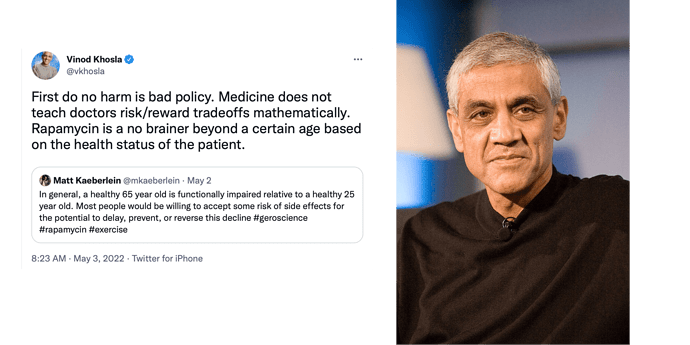 While there are many tech entrepreneurs and longevity experts who are enthusiastic about rapamycin (including Tim Ferriss, Kevin Rose, Brian Armstrong of Coinbase, Peter Diamandis, David Sinclair and Peter Attia and other health and longevity experts), this is the first we’ve heard from Vinod Khosla and his very positive assessment of people’s use of rapamycin.

Vinod’s position on rapamycin is important for a few reasons:

I saw Vinod Khosla speak at the Rock Health (San Francisco Digital Health Startup Incubator) conference in 2012 - he has an extremely refreshing view on the healthcare and biotech markets, and innovation in this area. I encourage you to watch this video to better understand where he’s coming from. As he says, “Innovation starts on the fringes…” and right now, rapamycin is on the fringes. But in the coming years I expect this fringe to grow into the mainstream, and change the world in the process. 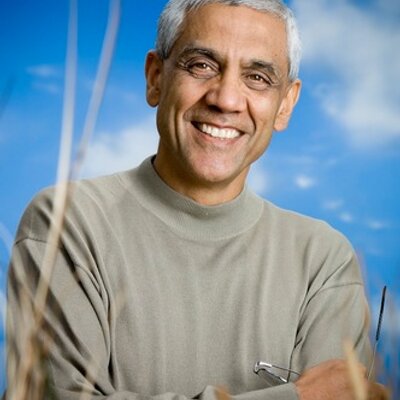 @vkhosla
First do no harm is bad policy. Medicine does not teach doctors risk/reward tradeoffs mathematically. Rapamycin is a no brainer beyond a certain age based on the health status of the patient. twitter.com/mkaeberlein/st…

In general, a healthy 65 year old is functionally impaired relative to a healthy 25 year old. Most people would be willing to accept some risk of side effects for the potential to delay, prevent, or reverse this decline #geroscience #rapamycin #exercise Vinod Khosla (born 28 January 1955) is an Indian-American billionaire businessman and venture capitalist. He is a co-founder of Sun Microsystems and the founder of Khosla Ventures. Khosla made his wealth from early venture capital investments in areas such as networking, software, and alternative energy technologies. He is considered one of the most successful and influential venture capitalists. In 2014, Forbes counted him among the 400 richest people in the United States. In 2021, he was ra...

6 Likes
Rapamycin Frequently Asked Questions (FAQ)
Questions for Khosla on Rapamycin?
Do you tell your doctor you are taking rapamycin?
Krister_Kauppi May 5, 2022, 7:09pm #2

Interesting, do someone know if Vinod Khosla is taking rapamycin and what dose regime?

No - someone asked him on twitter after his posting, but unfortunately he did not respond.

I posted a twitter post also. Would be very interesting to get his view on topic. I think we all would benefit if we start to share more and talk open of what we do so that we together can make this life journey.

Yes, but for some reason billionaires don’t post a lot of their personal health decisions and medication use on twitter

But - I know some people who have connections to Vinod - so I’ll try some other avenues to get the info and will update if I hear back.