Full Paper below (note - some of the images are best viewed in the Google Docs / Google Drive version above):

Where did you purchase the rapamycin powder?

Woa, ok this is next level.

I need some time to digest…

Where did you purchase the rapamycin powder?

Rapamycin here in Canada is prohibitively expensive. Quoted Rapamune, $1000CDN for 100 x 1mg tablets, or $8 USD/mg. So I started to search for alternate sourcing. Thankfully, a fairly robust online community of bio-hackers had paved the way. When I started Rapamycin back in January 2021, some posters in another forum vouched for a capsulized product out of Austrialia: http://rapamycin.store/ (30 capsules @ 4mg/capsule, approx $1 US/mg delivered). I had ordered/consumed several several batches. For the past 4 weeks, I upped me dose to “18mg” with GFJ per week, no significant side effects. As the year progressed, I considered alternative sourcing. Some other posters have vouched (3rd party analysis, personal side effects) for Rapamycin sourced from http://www.hhdpharm.cn/en-us/ (WHP) I w…

Which mode of administration do you plan to continue going forwards?

Out of interest have you ever done an AUC comparison between this particular powder and Rapamune (taken orally)?

Which mode of administration do you plan to continue going forwards?

Current IM + IN for a while longer, I need to tease out any transiency, good or bad. I’d like to find an upper limit where things go really south and then re-assess.

Out of interest have you ever done an AUC comparison between this particular powder and Rapamune (taken orally)?

No. I’ve never taken a tablet of any sort, only powder.

re AUC of rapamue taken orally, this data is widely available in the clinical rapamycin literature. Most often rapamune tablets are used orally.

I just finished a first read through though will need to revisit several parts. A very impressive document that deserves to be pinned on the homepage? @RapAdmin

A very impressive document that deserves to be pinned on the homepage?

Thank you. I am shopping journals…LOL.

I’ve taken intranasal rapa with dmso but unfortunately do not have anything to share w.r.t bloodwork, etc.

I did notice a strange sort of alertness (could be placebo effect) via this route of administration.

But decided that it’s probably not best to do it often as i don’t know how frequent rapa can affect neurons.

Bookmarked for a more thorough read. Thank you!

A very impressive document that deserves to be pinned on the homepage?

I agree… as always, @Mac is great at pulling really good information together and presenting it in a compelling way… the only challenge I have is that it takes significant time for me to sit down and study what he’s written - as is definitely the case here.

I’ve pinned it for a month to give us a chance to read, digest and discuss it. I think this is an important area - optimizing dosing strategies across different types of rapalogs, with different dosing schedules and modalities seems like it could be an important approach to maximizing benefits from rapalogs / rapamycin.

Nice job MAC. Bravo for your willingness to step out of the box and try something very different.

It’s very convincing that significant blood levels can be achieved by bypassing the GI tract . This is important since there is so much inter person variability with the oral route.

From a practical viewpoint, many people would want the liquid rapamycin for injection to be pre- made, and yet others wouldn’t like to give themselves shots, so an intranasal formulation might be more compliant friendly.

I’m also curious to know how blood levels would look using a much lower dose, like maybe 3 mg’s.

Yes - I’ve done work in Biotech and the market opportunity for small molecule drugs (orally taken) is vastly larger than injection drugs… people generally really shy away from injections unless they absolutely have to have them (think insulin).

Has there ever even been a “blockbuster” drug that was injection? I don’t think so, but I may be wrong.

Though - perhaps that is changing too… Given the popularity of all these IV drips for vitamins, and clinics (rather scammy clinics in my opinion, due to lack of efficacy data) focused on selling NMN injections, etc. - people seem to be overcoming their reluctance for injections and needles given the right longevity incentives. In the Tim Ferris / Matt K. discussion Tim suggested NMN IV drips are all the rage in Austin… but then again, monthly or irregular iv drips are perhaps different from regular daily or weekly rapamycin injections, from a risk/reward perception standpoint.

I think I’m probably representative here. I’m fine with needles for vaccines, and blood donations, but I haven’t had a needle in my body outside of those use cases in perhaps 30 years.

Current IM + IN for a while longer,

Did you only do these simultaneously?

It would have been interesting (would be interesting) to compare the IM vs. IN modalities…

I’m much more predisposed towards IN vs. IM injections… so would be interested in the dose/benefit comparison between the two approaches.

Did you only do these simultaneously?

It would have been interesting (would be interesting) to compare the IM vs. IN modalities…

Future experiment. Will have to washout first, then just do IN. I think IN is fraught with large reproducibility issues given such a VERY small olfactory window with hydrophobic, relatively large molecule rapamycin, so I might have to OVER dose to make sure I get a large signal, and then dial back.

I will certainly update should I run this experiment, it would be worthwhile.

I’m much more predisposed towards IN vs. IM injections… so would be interested in the dose/benefit comparison between the two approaches.

I most interested in longevity…will do anything and overcome any impediment. Biology does not care what I think, nor does the clock, or mischievious cancer cells.

I most interested in longevity…will do anything and overcome any impediment.

I totally get it… whatever works effectively and efficiently… and long term I think thats the best approach, I’m just a late adopter when it comes to anything injection oriented.

MAC, thanks so much for freely sharing your research and novel protocol with us. Not only am I really impressed with the research you conducted but also how you went beyond the conventional, unquestioned oral dosing protocol and developed and self-administered a radical new approach. If this website would give rankings for members, I think yours should be “Next Level Rapanaut”

I’ve only spent a couple of hours so far going over your paper and intend to review it more thoroughly over the next week or two. Here some of my initial reactions and observations as I myself struggle to find the best dosing protocol.

Your AUC on page 55 looks like you took the equivalent of about a 100 mg oral dose of rapamycin! See image below for reference. Kind of makes sense since RAPA is 15% bioavailable and you injected about 15mg. The side effects of this “overdose” appeared fairly mild in the patient that took to 103 mg oral RAPA. “Patient 3 complained of tiredness and showed a spontaneous decline in total cholesterol levels several days after overdose which implied that overdose was associated with an elevation in total cholesterol. Triglyceride concentrations were not above the normal range and did not change significantly from day 4 to day 67 post-overdose.” Maybe if this patient were in better health her side effects would have been less severe. 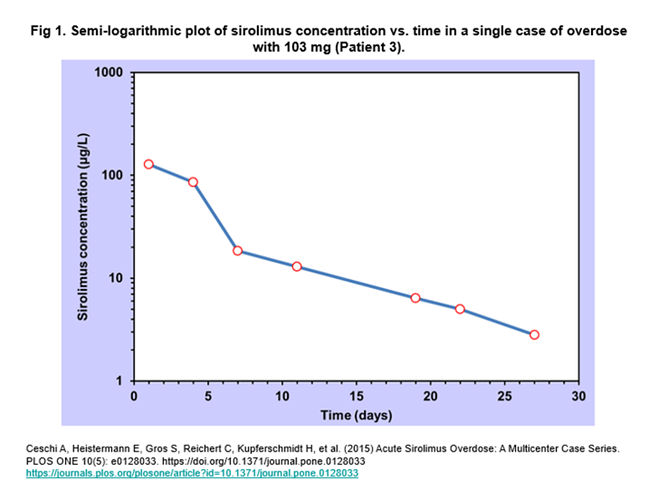 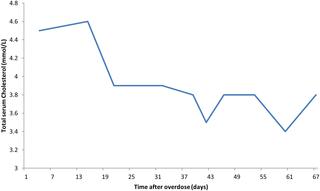 Background There are few data relating to sirolimus overdose in the medical literature. Our objectives were to describe all cases of overdose with sirolimus reported to Swiss, German and Austrian Poisons Centres between 2002-2013. Methods An...

However, based on the article on the second page of your paper, it appears maximum benefits would be achieved by flattening out the curve and have CMAX = Trough.

“It is interesting to consider the observation that continuous delivery of rapamycin provided the most effective in vivo treatment regimen. This finding is similar to what has been observed with other known antiangiogenic agents, where low-level continuous-delivery methods induce the greatest anti-tumor effect.”

This kind of flies in the face of pulsed dosing period, and is making me consider daily dosing. I really like the idea of intranasal dosing throughout the day instead of oral dosing because all the things that inhibit the CYP34a enzyme – grapefruit, pepper, green tea, parsley – that can make it near impossible to achieve constant RAPA blood levels. Plus I think you are onto something with bypassing the liver and some of the associated side effects rather then them all being associated with MTOR2 inhibition.

Anyway, this paper is a treasure trove of research and ideas and I can’t thank you enough for all your hard work and generosity. I look forward to reviewing it further and sharing ideas!

“It’s very convincing that significant blood levels can be achieved by bypassing the GI tract . This is important since there is so much inter person variability with the oral route.”

But are we sure that changes in the GI tract brought about by Rapamycin don’t play a role in its systemic effects? Some studies do indicate that, and among others changes in the intestinal microbiome as a result of oral Rapamycin intake have been discussed in research. It is a macrolide antibiotic after all.