Rapamycin & Targeting Alpha-Synuclein as a Therapy for Parkinson’s Disease

I wonder whether pulsed dosing (as used in longevity applications), or other delivery methods (intra-muscular injection, IV, Intra-nasal…) might be effective in this application:

Rapamycin and its analogs work via mTOR inhibition to induce autophagy. This class of drugs has been shown to have neuroprotective effects primarily due to its ability to promote increased clearance of α-syn through the induction of autophagic processes (Webb et al., 2003; Crews et al., 2010; Bové et al., 2011; Decressac et al., 2013; Maiese et al., 2013). However, rapamycin has limited utility because it lacks specificity, and acts on other essential pathways involved in immunosuppression, and thus is not a viable drug candidate for Parkinson’s disease where long-term treatment would be necessary. Due to rapamycin’s therapeutic limitations, researchers have investigated other compounds that promote autophagy. For example, trehalose is a sugar molecule present in many organisms that acts through an mTOR-independent pathway, and has been shown to enhance autophagy through increased lysosomal biogenesis, leading to the corresponding increased clearance of protein aggregates (Sarkar et al., 2007). 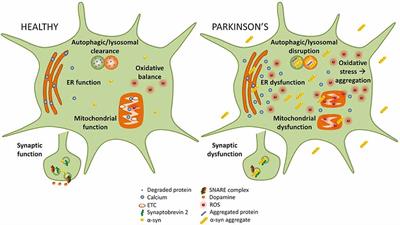 Targeting Alpha-Synuclein as a Therapy for Parkinson’s Disease

Parkinson’s disease (PD) is one of the most common neurodegenerative disorders with a global burden of approximately 6.1 million patients. Alpha-synuclein has been linked to both the sporadic and familial forms of the disease. Moreover,...