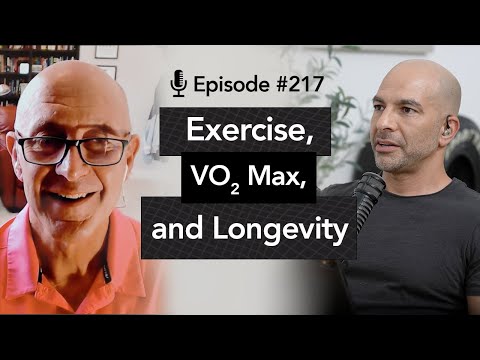 I’m a moderate exerciser - 2 to 4 times a week for 1.5 hours or so each time, moderately strenuous (perhaps 40 or 50 METs as they describe it in the podcast. I’ve been thinking that was enough. But - I see the reductions of all-cause mortality as you continue to increase your fitness, and I think that I need to do much more. After listening to this podcast a few times, I figure I need to up my game… and work towards 100 METs per week.

Peter Attia mentioned a paper in JAMA that he describes as by far the most compelling description of this phenomenon. 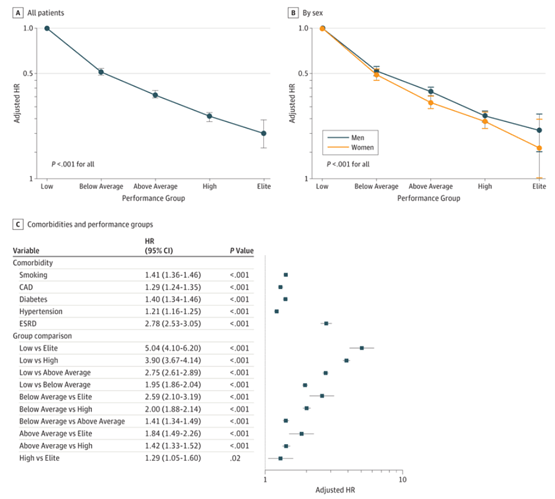 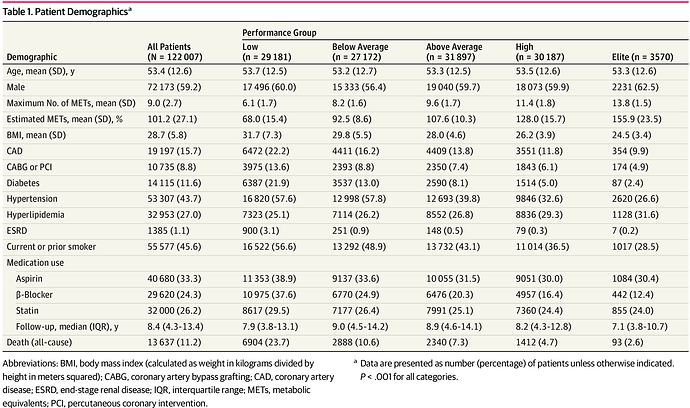 Association of Cardiorespiratory Fitness and Mortality Among Adults...

“We often think about hazard ratios in risk reduction, but if you think about the risk increase. Compare people in the top 2.5% VO2 max to the bottom 25%, the hazard ratio moving in that direction is 5.04. See group comparison in the table above for Low vs. Elite”

This means there is a 5 fold increase in all-cause mortality between the fittest 2.5% and the least fit 25%

I also really liked the example of the Nordic cross-country skiers who were very active and fit into their 80s (doing 90km cross country ski trips). They were as fit and physically capable as many people 30 or 40 years younger. That is the type of fitness I’d like to have.

Longevity and reduced mortality and cardiovascular disease (CVD) mortality and morbidity compared with the general population are described among former athletes in a few studies only. The aim of the study was to assess the outcomes of mortality and...

Being unfit is an incredible risk factor ”‒ Mike Joyner

Jill Barnes and Mike wrote an editorial for the Mayo Clinic Proceedings 5-10 years ago where they said if people have 12-14 MET peak exercise capacity (with the exception of cancer screening), you could probably ignore everything else

It is no coincidence that the increase in chronic disease in people corresponds with the rapid decline in physical activity. The dramatic shift in lifestyle and behavior during the past 50 years is creating substantial challenges for the medical community to keep patients healthy. This issue of Mayo Clinic Proceedings includes a collection of articles that address declining physical activity in the general population and the resulting cardiovascular risk and mortality. Collectively, these articles highlight the importance of accurately quantifying physical activity in populations, 2, 3 determining the threshold metric for cardiovascular risk, 4, 5 and systematically delivering preventive recommendations to patients. 6 Three major points from these articles deserve emphasis: (1) fitness, and not just fatness, is important for stratifying cardiovascular risk; (2) simple physiologic measures, such as resting heart rate (RHR) and routine exercise testing, can be highly predictive of risk; and (3) physical activity should be recommended by all physicians, regardless of whether an institutional protocol for exercise prescription is yet in place.

Lack of activity destroys the good condition of every human being, while movement and methodical physical exercise save it and preserve it.Plato1

How to figure out the MET equivalent for your workouts:

The metabolic equivalent of task (MET) is the objective measure of the ratio of the rate at which a person expends energy, relative to the mass of that person, while performing some specific physical activity compared to a reference, set by convention at 3.5 mL of oxygen per kilogram per minute, which is roughly equivalent to the energy expended when sitting quietly. The original definition of metabolic equivalent of task is the oxygen used by a person in milliliters per minute per kilogram body...

What I coincidence, I was just listening this podcast as I started my new season of structured indoor cycling training program to motivate me for the horrible vo2max and threshold workouts that will follow in the program…

Thank you! 3 met sounds much more realistic! Is it enough or not for my age (67)? Do I need more per day?

This means that I’ll have to at least double my activity. Not easy but doable.

Tip: If you want to climb stairs in your 80s, follow or exceed the VO2 max green line!![ 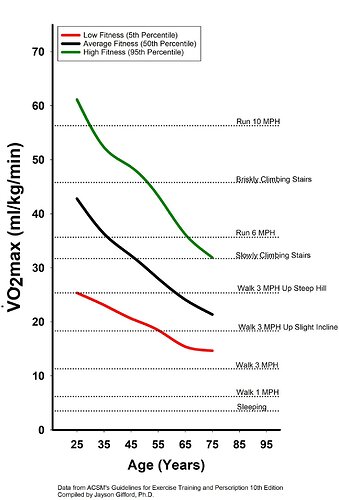 A student summarized this graph today by saying, “VO2max, critical power and the lactate threshold become increasingly more relevant to everyday life as we age, with tasks of daily living eliciting greater percentages of VO2max as we age.” 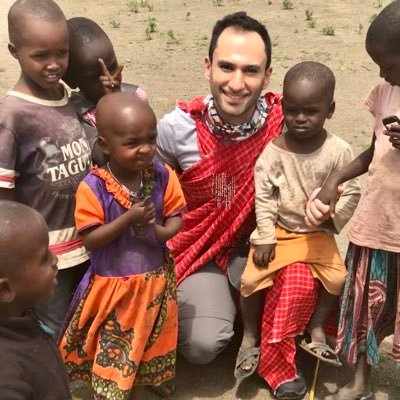 @RakanINazer
@JaysonGifford If I can be at 80 as fit as a 50 yo then my life is a blessing. https://t.co/WFKxkzJAy3 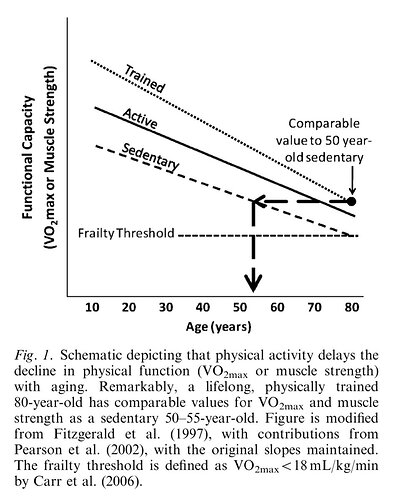