Dosages used in animal trials are far higher than any of us is taking. 14mg/kg/day is standard across several of the trials, with many being much higher. An adult human weighing 75kg would have to take 7,350mg a week to match that dosage. So why do we think rapamycin will deliver the same benefits on a tiny fraction of the dosage that has been shown to ‘work’ in mice?

A randomized controlled trial to establish effects of short-term rapamycin...

Age is the single greatest risk factor for most causes of morbidity and mortality in humans and their companion animals. As opposed to other model organisms used to study aging, dogs share the human environment, are subject to similar risk factors,...

Some dog trials are 0.08mg/kg/day viz 6.8 mg for 85kg me. However, that is daily. Also there is the question as to what should be used to prorata the value. Should it be surface area or otherwise.

It would be useful to have a summary of the trials by dose.

Brad Stanfield is aiming to do a human trial.

What I am doing is working on a broad approach to make my cells function better at a cellular level. That means producing the right proteins. I am trying a combination of different approaches each of which has the potential to improve how the systems operate. I am quite pleased with the outcome myself, but I go heavily into measuring things.

I may achieve a lot without rapamycin, but as part of my experiments it is good to add on rapamycin.

My health today is much better than it was say 5 years ago. 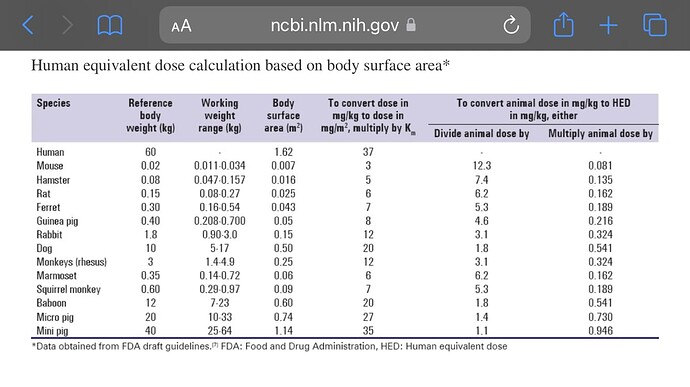 This dose showed promising results in the preliminary trial.

This is true - the higher the dose, the longer the lifespan increase (at least in males, at 8mg/kg in females they reached the dose level for mice that lifespan was no longer increased).

So I agree - low doses are unlikely to increase lifespan, but may be individualized in terms of responses.

But the big issue is that the mouse studies are done in largely pathogen-free environments for the mice, whereas we humans don’t live in such environments… so I don’t know if we can pursue the exact same dosing levels or strategies.

It would be useful to have a summary of the trials by dose.

Here are the studies with the highest doses of rapamycin that have been tried in mice (to the best of my knowledge):

Based on efficacy in the Leigh Syndrome mouse model and serum drug levels in wild type mice, we estimate that this treatment regimen is comparable to dietary delivery of eRapa at approximately 378 ppm (Johnson et al., 2015), or 27-fold higher levels than initially shown to extend lifespan in mice when continuous treatment is initiated at either 9 months or 20 months of age (Harrison et al., 2009; Miller et al., 2011).

Dose-dependent effects of mTOR inhibition on weight and mitochondrial disease...

Rapamycin extends lifespan and attenuates age-related pathologies in mice when administered through diet at 14 parts per million (PPM). Recently, we reported that daily intraperitoneal injection of rapamycin at 8 mg/kg attenuates mitochondrial...

And these studies are part of the rationale of what @Mac is doing, trying to increase systemic and tissue levels of rapamycin to high levels but avoiding the side effects:

Remember that was 14 milligrams per kilogram of FOOD in the ITP study.

Yes - it can get confusing. The ITP uses ppm in food, but some other studies use mg/kg of body weight of the mice… thankfully, in some studies they estimate the equivalent dosing.

Yes that was the initial study. But that’s what it was. It’s really impossible to extrapolate anything meaningful from mice to human dosages in my opinion. 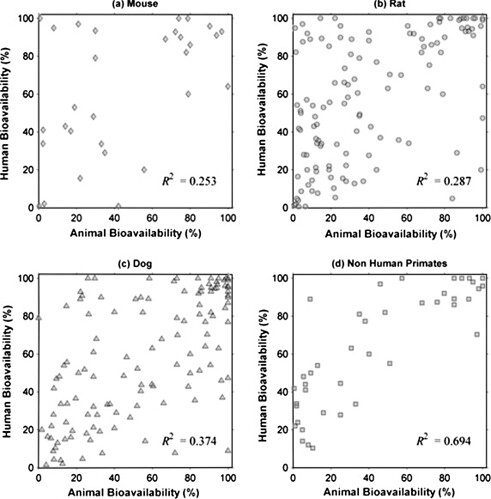 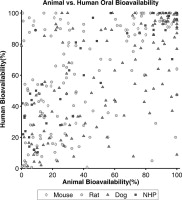 Animal versus human oral drug bioavailability: Do they correlate?

We know what dosages various people are taking, but we have little or nothing meaningful about how well it’s working for people, as this is such a long-term thing. We’re all trusting that somehow it’s working. Yet it makes no sense to me that we imagine dosages such as 6-10-20mg/week will do anything at all when the only evidence that it works comes from animal studies where dosages many many times higher were used. Even were we to raise to 70mg/week, we’d still be far below the levels shown to work in mice, while suffering dangerous and intolerable side-effects (as well as some of us running out of money). I say this although I’m taking the stuff faithfully. I ran the numbers for the first time yesterday and it makes no sense to me. Unless I’m wrong - and I hope I am (please tell me what I’ve missed), it makes no sense for us to be taking it

I won’t repost my thoughts on dosage, but I do believe 5 - 20 mg/week is effective for some things. Many people, including me, were expecting too much from rapamycin.
I have taken rapamycin from 5 up to 20mg/week with GFJ and EVOO for 9 months and have had some good results.
(Acarbose - Details On Another Top Anti-Aging Drug - #61 by desertshores)

Unfortunately it’s not studied enough. I’m taking it as immunosuppressant after kidney transplant and hope that it serves 2 purposes for me: keeps kidney from being rejected while keeping me young. Once I asked M Blagosklonny if it’s possible to kill 2 birds at the same time, he replied in the affirmative. So I’m hopeful. However, when I suddenly stopped taking Rapa for the whole 4 mo, nothing bad happened to my kidney. All markers were very healthy as if my system did not even notice it.

We know what dosages various people are taking, but we have little or nothing meaningful about how well it’s working for people, as this is such a long-term thing. We’re all trusting that somehow it’s working. Yet it makes no sense to me that we imagine dosages such as 6-10-20mg/week will do anything at all when the only evidence that it works comes from animal studies where dosages many many times higher were used. Even were we to raise to 70mg/week, we’d still be far below the levels shown to work in mice, while suffering dangerous and intolerable side-effects

This is a concern I share.
To what extent was mTORc1 inhibited in the rodent studies that showed the greatest increases in lifespan? I mean to remember Rapadmin made a post wherein it was discussed what different doses of Rapa resulted in what amount of mTORc1-inhibition in humans. And I thought even relatively lower doses of Rapa had a reasonable effect on suppression of mTORc1-signaling - but I can’t find the post anymore. This may be a silly question, but perhaps we should strive for a similar amount of mTORc1-inhibition - if feasible at all with the doses we are able to take without experiencing dangerous side-effects?

We had a Portuguese Water Dog (PWD), age 11, that was dying of renal failure. The vet did blood tests and prescribed refined Milk Thistle. Told us that our dog likely had a month of life left. I researched Milk Thistle’s success for canine liver failure and found no valid research. Desperate I researched everything on the Internet and quickly discovered Rapamycin. The vet had never heard of it and it took me 10 days of finding research to convince her to prescribe it for our PWD. She asked me to select the dosage. I used the research on humans as my baseline. I dosed our dog with 4 mg every three days. In a week all her liver failure symptoms went away. We continued on that dosage until the dog was 13.5 years old. At that age, she had lived well past all her litter mates which had died between 8 and 12 years. Because of declining energy, I upped the frequency of the 4 mg to every other day. She was free of all renal failure symptoms at 15.5 years old when we put her down due to severe arthritis.

I recently was diagnosed with severe Gout and minor arthritis at 69 years old. I believe that these autoimmune diseases were stimulated in me due to the COVID-19 vaccine. So I self-prescribed the same dosage that we’d given our PWD. I take one a week. My only side effect was a minor mouth rash the first week. I also have not had a second Gout relapse after two months of Rapamycin. I plan to continue taking it until something better comes along.

Alan, welcome to the forums and thanks for sharing the positive news on your dog and yourself on rapamycin.