I listened to a Q & A and Matt Kaeberlein mentioned a mouse study which showed that very high dose of rapamycin did not extend lifespan. Do someone know what study he is talking about?

Matt Kaeberlein: “I think it’s worth mentioning that you can push rapamycin past the optimum so we did an experiment at very high dose 8 migs per gig per day for 3 months in females. It didn’t shorten lifespan but it didn’t extend lifespan whereas at a lower dose in females we did get a big lifespan extension. So I think there is this sort of trend at least among certain circles of trying to push the dose higher and higher. I just want to say that at least in mice it does appear to be the case that you can push it too far. Again, we don’t know what the optimum is so I just want to caution people a little bit about more isn’t necessarily always going to be better.”

Didn’t they ask that the video not be shared via social media? I suppose they expected it would leak out.

Sorry, I missed that part. I removed the link now from the post. Thank you for pointing that out.

It was in the email with the link. Thanks for the edit.
He did another talk recently that was posted to youtube (& linked here, I think) with at least some of the same content, though I don’t know if it included the bit about the max useful dose (for some female mice

FWIW, it seems to me to make sense to think there would be a max useful dose. Once mTorc1 is knocked down to zero, more treatment won’t reduce the levels any more.

Yes - in the female mice, after many tests and increasing doses, the eventually reached a point at which rapamycin no longer increased lifespan. But it was at an extremely high dose, that I think is likely many, many times higher than than the equivalent dose that any human has likely ever taken (on an ongoing basis). Thought its also hard to do an exact comparison on mouse and human dosing. 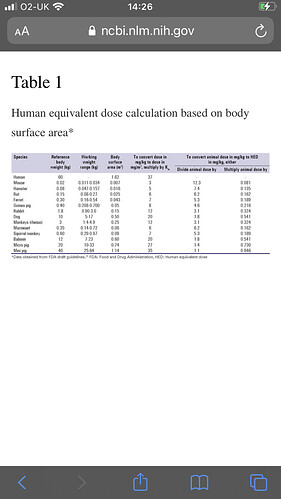 And in cancer applications they give people up to 90mg a day for long periods of time (not sure how long)… so obviously one day of higher dose of rapamycin once every week or two seems unlikely to kill you.

It seems we have a long way to go on identifying the optimal doses for human longevity, and ultimately it seems likely to be a somewhat individual issue and how we respond to the medication.

Great study you found there and thanks for the calculation example! Here is the source for the study if someone is interested

Understanding the concept of extrapolation of dose between species is important for pharmaceutical researchers when initiating new animal or human experiments. Interspecies allometric scaling for dose conversion from animal to human studies is one of...

“All things are poison, and nothing is without poison; the dosage alone makes it so a thing is not a poison.” ~ Paracelsus

Yes, two things of interest in that study. One is that females are more sensitive to the effects of mTOR inhibitors and hit a dose that caused hematologic malignancies. The other thing is that transient administration gave prolonged effects making Alan Green speculate that it was due to epigenetics.