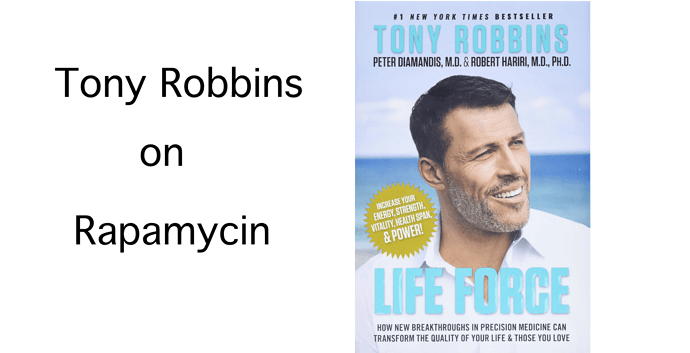 In February of this year, Tony Robbins (with co-authors Peter Diamandis, M.D. and Robert Hariri, M.D., PH.D.) came out with a new book titled “Life Force: How New Breakthroughs in Precision Medicine can Transform the Quality of Your Life and Those You Love.”

It seemed to have a “longevity” spin, and with Peter Diamandis as one of the authors I thought it might be interesting to check out. And of course I was curious if it covered rapamycin at all. I didn’t have high hopes, as most popular longevity books are generally pretty terrible at accurately representing the science.

But, I’ve been pleasantly surprised with the book. It doesn’t got into much depth in any one area (the rapamycin section is only about 7 paragraphs in total) but it generally seems to provide a reasonably good overview of many topics.

And, if the rapamycin section is any guide, its actually pretty accurate. Its not perfect; they seem to have missed the higher lifespan results of the 2009 ITP program studies with higher dose (42ppm) rapamycin that resulted in median lifespan improvements of 22% for males, and 28% for females. But the information other than this one mistake, seems pretty good. You can see for yourself below in this excerpt:

“The second treatment is rapamycin and has been used since 1999 to prevent transplant patients from rejecting their new organs. In 2007, it won additional FDA approval to treat metastatic renal cell carcinoma, the most common kidney cancer. Off-label, it’s widely called upon to protect against graft-versus-host disease and to coat coronary stents.

But what has the healthspan and longevity world buzzing is rapamycin’s unmatched anti-aging track record in animal trials. The National Institute on Aging’s Intervention Testing Program has tested middle-aged mice with dozens of drugs, supplements, foods, plant extracts, hormones, and peptides. Only six substances have shown significant lifespan benefits. Resveratrol, fish oil, and green tea all failed the test. Aspirin did a little better. But rapamycin beat all comers, extending median survival by as much as 18 percent for females and 10 percent for males. When combined with metformin (which had little impact on its own), rapamycin racked up a 23 percent average survival dividend for both sexes, plus a sizable increase in maximum lifespan.

In a study by Dr. Matt Kaeberlein at the University of Washington, a three-month course of rapamycin increased remaining life expectancy in middle-aged lab mice by up to 60 percent. In the healthspan arena, Dr. Kaeberlein and coauthor Veronica Galvan concluded, rapamycin “delays, or even reverses, nearly every age-related disease or decline in function in which it has been tested… including cancers, cardiac dysfunction, kidney disease, obesity, cognitive decline, periodontal disease, macular degeneration, muscle loss, stem cell function, and immune senescence.”

So what’s the catch? At typical clinical doses, rapamycin is part of a powerful immunosuppressant regimen for transplant patients that makes people significantly more vulnerable to bacterial infections. It can impair wound healing. And as yet, there’s no clinical trial data to show that its remarkable lifespan-enhancing results in animals can be replicated in people”
…
“Even so, scientists like resTORbio cofounder Joan Mannick believe that rapamycin—or synthetic facsimiles known as rapalogs—will ultimately break through as a safe and effective anti-aging therapy. The key, Dr. Mannick says, is to use lower and more intermittent dosing than the standard for transplant patients.”

So, overall, a moderate “thumbs up” for the book as an overview for some of the newer and more interesting longevity and health areas that are gaining traction these days.

Amazon.com: Life Force: How New Breakthroughs in Precision Medicine Can...

Are there lots of charts/tables/visual aids in the book, or do you think the Audible version would be ok?

Very few if any charts / tables / visual aids, that I’ve noticed. Audio is fine. Perhaps rent the audiobook from the library

I rent many audiobooks from our local library using this app: Libby

Thanks for the review! My standard question have Tony or Peter mentioned in any occasion if they take rapamycin?

Peter Diamandis AMA - Not "yet" on Rapamycin, but its planned

Peter Diamandis, founder of the “XPrize Foundation” and other projects, was on Reddit today doing an AMA talking about longevity: [Screen Shot 2021-11-01 at 2.03.00 PM] Peter had some interesting points about the longevity areas he’s working on… A few things I’m up to in the space of Longevity: Lifeforce Book - I’m releasing a book in partnership with Tony Robbins early next year. It will be a dense bible on all things longevity. Including things like mine and Tonys entire diet, supplement and exercise regimen. Longevity XPRIZE - next year I’ll be announcing a 100m prize that will go to the team who can reverse the age of a mammal by 20 years. Cellularity - a biotechnology company productizing allogeneic cells and tissues derived from the postpartum placenta (CELU) COVAXX - a scalab… 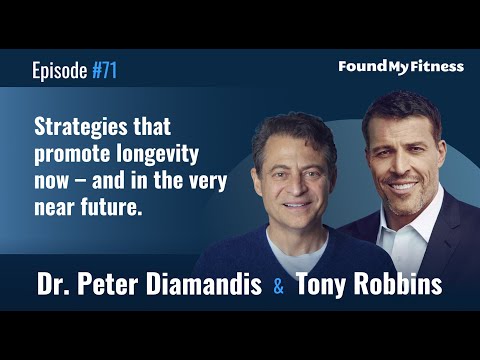 Thanks for the Libby link! I was able to sign up and get my online library card and get on the wait list for the book with just a few easy clicks!