In this new study performed in mice, rapamycin supplementation lessened, but does not reverse, age-related hearing loss in mice even if the treatment starts later in middle age. The researchers of this study had previously found that age-related hearing loss was minimized in mice who had been receiving rapamycin since they were young. In this new study, the researchers wanted to see if these results could be replicated with treatments started later in life. The researchers found that rapamycin treatments given to mice that were 14 months old — which is equivalent to approximately 50 years in humans — prevented them from developing further hearing loss.

The researchers summarized by stating:

Age-related hearing loss (ARHL) occurs in approximately one-third of people in the United States over the age of 65 increasing to approximately half of those over the age of 75 (e.g., Gates, 2006; Gates et al., 2010). ARHL can reduce ability to communicate, quality of life and social integration and has been identified as a major risk factor for depression and dementia (e.g., Gates et al., 2010; Lin et al., 2011; Davis and Smith, 2013). One major cause of ARHL is an age-related loss of sensory hair cells, predominantly outer hair cells, and an accompanying decrease in auditory sensitivity as measured by threshold shifts (TS) in auditory brain stem response (ABR) in animal models and audiometric thresholds in people. The underlying mechanisms responsible for age-related hair cell loss remain unknown and there are no treatments currently being clinically applied to prevent or reduce this pathology.

The National Institute on Aging Intervention Testing Program (NIA-ITP) tests for treatments that can be added to diet to increase lifespan, using UMHET3 mice, a four-way cross, as a model. Among several effective treatments identified through NIA-ITP, addition of rapamycin to diet at 9 months of age was found to increase life span by 26% in male mice and 23% in female mice (Miller et al., 2014).

We hypothesized that ARHL might share underlying mechanisms, such that treatments that enhance life span could also reduce and/or delay ARHL. This is consistent with studies that demonstrate the positive effects of rapamycin on age-related disorders in animal models, including decreases in cardiac pathology ([Dai et al., 2014] 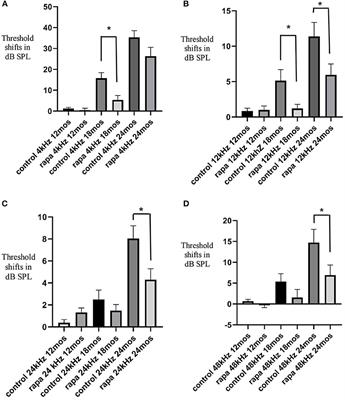 Our previous study demonstrated rapamycin added to diet at 4 months of age had significantly less age-related outer hair cell loss in the basal half of the cochlea at 22 months of age compared to mice without rapamycin. The present study tested...