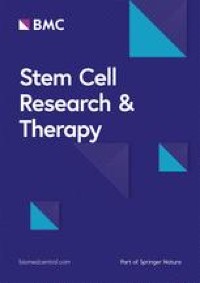 Background The hematopoietic system is especially sensitive to total body irradiation (TBI), and myelosuppression is one of the major effects of TBI. Astaxanthin (ATX) is a powerful natural anti-oxidant with low toxicity. In this study, the effect of...

Watch the video by Dr S, with the startup Early Detection Inc.

Nothing on their website talks about FDA, availability, etc. Do you know more retail specifics?

Detection of the tumor marker...

The enzyme D-galactose oxidase (GO) oxidizes the carbon-6 position of the hydroxyl groups of galactose-N-acetyl galactosamine, which are commonly present in colon cancer cells and in rectal mucin of patients with colon cancer. We have studied the...

Yes Mac, you’re quite right, he discovered this in 1992 and I believe it’s widely used in China, but his main passion was prevention and he dropped the ball on his early detection work while he was endlessly studying IP6. The man is a true genius but pharmaceutical companies ignored his work on IP 6. I’m calling tomorrow to see where the early detection tests are available.
Get the book. It’s worth it

I guess some entrepreneurs/investors finally paid attention. I hope he finally gets the recognition for life’s work of passion and excellence.

He abandoned this test pursuit/commercialization for IP6?

Yeah, well , he’s a pure scientist and discovered a natural substance that causes cancer cells to convert to a well differentiated histology. That’s like a Gleason 10 prostate cancer turning into a Gleason 6. Still cancer, but all of the difference in the world in terms of prognosis.

Just a personal n=1 anecdote. Recently took 7mg of Rapamycin with 200mg Ketoconazole an hour before the Rapamycin and got a mouth sore. Could be coincidence, but have lowered ongoing dose to 6mg plus Ketoconazole every 10 days. Have been taking lower doses for about 6 months without noticeable side effects. One possible good effect: I’ve noticed reduced trips to the bathroom at night. I used to get up 4 or 5 times a night to urinate, and that’s down to about 3 now. Again, could be a coincidence.

It wouldn’t be surprising to get a mouth sore given the sudden increase in dose.

I’m assuming you were at 7mg/week before, and you just added the ketoconazole, so you were then jumping up to 40mg dose equivalency - is that right?

The sudden tumbling pounds after 3 months of use was a surprise to me. At the time I was up to 195 lbs… I was in what I thought was pretty great shape, solid… thick - not fat. My arms felt like thick pillows when I would rest on them at night. I kinda set a goal in my mind to hit 200 lbs once in my life. To be 200 pounds seemed total jock status. and then the weight gain stopped… started rolling back a pound a few days another pound. I knew all the articles described this happening at 3-months but it kind of worried me initially. I saw my physician at the end of the month and I was at 180 pounds. I stopped losing at that point. But I couldn’t get off that weight - couldn’t gain it again. when I saw my physician and pulled up my shirt - my muscles all seem to be still pretty solid… where did the weight come off at??? He was shocked he said it’s visceral fat - over time it covers all your organs. I had never heard of visceral fat? He said it is almost impossible to lose at a certain age…even with constant exercise. It made sense as I was more cut in the stomach and at my pelvis. That was 16 months ago - still stuck at 183 to 184. My belly button is hard firm and round. Look at an older guy who is a regular weight lifter and toned. That belly button is a dead give away as to age - looks like a horizontal slit. Not mine - LOL perfectly round. So let’s see what happens in 8 more weeks - and may be a bit more. Read the Men’s Health Article. The Risky Anti-Aging Pill Men Are Taking Now - Rapamycin

It was one of the articles that was part of what made me think to make the leap to rapa. And, it describes that 3 month wait before the weight falls off. First pic at 195 before I lost my visceral fat . Second pic - now. 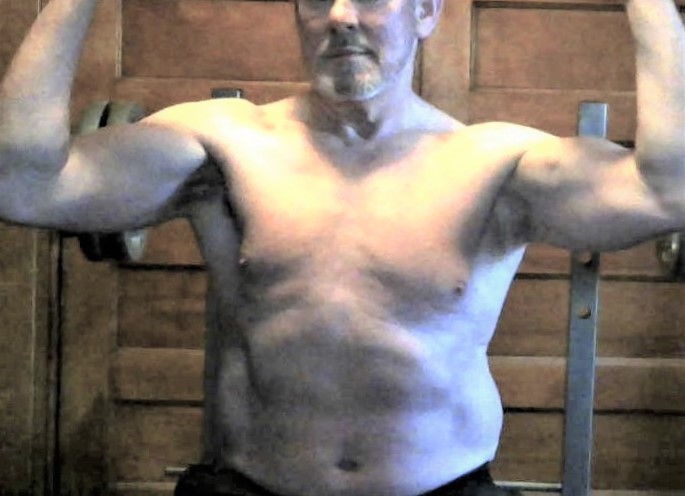 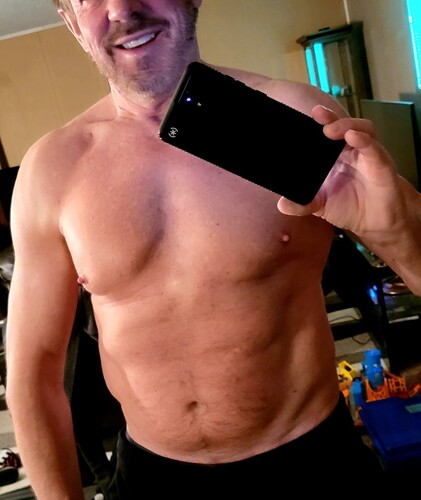 Not completely, I was taking the 7 mg with grapefruit juice, so the baseline equivalent dose was approximately 24.5mg. Still a large jump.

I would think people taking upper limit doses of rapamycin would want to get a complete blood count test a few days after the dose, at least the first time. While there might not be much in the way of detectable outward side effects there is a good chance there will be a large impact on blood values such as platelets, hemoglobin, white blood cell count, platelets, etc. The test can be self ordered (even in NY and the few other states that don’t permit self ordering of blood tests) through Quest or Labcorp. The test is inexpensive and almost everyone in the US has a Lacorp or Quest facility within a convenient distance.

I started taking astaxanthin 6 months ago, 12mg gel cap every 2nd day. Not for irradiation protection though, it probably helps to offset UV damage as well as any other form of radiation that we get exposed to. Apparently NASA has tried using it to help protect astronauts from cosmic rays.

Thank you! I may get back to you on the dosage issue. I do hope that early detection becomes a workable tool for others. The current breakthroughs in treatment are incredible, but it’d be much better to never have to use them!

Thanks, Joseph! That’s a new one to me and I will be incorporating it into my radioprotection plan. Looks very affordable, too, which is a nice thing when using multiple compounds.

chrisb, look up DMSO there are published papers on radiation proction.

DMSO prevents the loss of proliferative lingual epithelial stem and progenitor cells upon irradiation by facilitating DNA DSB repair, thereby protecting against radiation-induced mucositis without tumor protection. Given its high efficacy and low...

han the water-treated control animals. Treatment with dimethyl sulfoxide after irradiation had no effect on mortality. ©1967Health Physics Society...

Wow you took a lot of grapefruit. 3 in a short window. I believe you got a 5.67 x increase in Rapa instead of 3.5x. 68 ng/ml/12 = 5.6666666666. I agree that is too much. 6 or 7 mg rapa would have been a healthy dose. Been taking rapa for 5 years with/without grapefruit juice. I actually squeeze GF and weigh juice and pulp to have baseline dose which is 250 grams 3 minutes before rapa and seem to get 3-3.5 X. Tried 200 grams night before and 200 grams in morning and feel I got a much bigger dose increase thatn 3-3.5 X. I did not measure with lab test, but have good personal observation after 5 years to taking rapa.

Where did you get information for your 5.67 dose calculation, which I assume is based on ingesting more than the baseline 250 mg of juice?

From what I read 3.5x is the maximum increase and would occur at the optimum dose and timing… Papers say it can be less at that dose due to individual variation in the gfj interaction with enzyme which does vary by person, but never have seen anything that say it is more, so if you are just mathematically extrapolating from 250 ml to what the higher gfj intake is that is not supported …or at least I cannot find it…so post it if you can. What it means is some people need more than 250 ml to get to 3.5x.

Timing…seems to be general agreement that 1 to 4 hours prior to rapa dose is best gfj timing, but as gfj has about 12 hour half life even taking the night before will have an effect…just less than taking immediately prior.

Kerry, I was expecting to get about 42 ng/mL on the blood test, thinking of EnrQay’s 17 ng/mL from taking 5mg with one grapefruit. 5mg times 3.5 equals 17.5, so it seemed the effective mg dose would probably equal the ng/mL level.

That brings up the question of how the mg dose converts to ng/mL in the bloodstream. Is there anything we can say about the ratio?

Then, there’s the enhancement level of 3.5 that I had been accepting without giving it any further thought. The 2012 study used frozen juice that was specially provided to always be the same. That is necessary for an accurate study. In a study, consistency is more important than getting the absolute, maximum effect. I believe they found that frozen juice was better than bottled or canned. Why wouldn’t fresh grapefruit be better than frozen? Maybe fresh grapefruit can boost the effective dose by 5.67, or more, or less, depending on the individual grapefruit and the physiology of the individual taking it.

Also, EnrQay had less grapefruit than I did. Did the amount of grapefruit account for some or all the difference between our blood tests?

So, far the only peak tests I know of on this forum are EnrQay’s and mine. It would be interesting to see some more.

GFJ in bottles is pasteurized…thought is that the heat deactivates the enzyme.

Frozen is sometimes pasteurized. Likely the gfj supplied for the tests by FL Dept of Ag was not…they would know. But I see no statement to that effect. The lack of effect of some of the previous test gfj was the reason why the researchers went to FL to help solve the problem. The enzyme that works on this is relatively easy to measure in the juice.

Fresh is fresh…so gets around the pasteurization issue. However, so far I see 3.5 as the max increase and a wide range of gfj amounts has been tested to ascertain precisely this max "boost’.

As far as measuring the peak dose/increase/level outside of a lab/study that is difficult. If you look at the peak concentrations of rapa in blood they shoot up fast and decline almost as fast. This means timing of the blood draw has to be precise to measure one level against another. Off by a short time and that will overpower any of what you are looking for. And consider that there is a lot of individual variability in the amount of GFJ needed to get to a certain level of enhancement. I guess the point is why bother?

FWIW…
Purchased a copy of AbulKalam Shamsuddin book you mentioned IP6. + Inositol, good information. He has a web www.ip-6.net

Created my own grapefruit juice. Bought two Ruby Red seedless fruits… cut one in half scooped the pulp and flesh out… put in my juicer/blender with a half cup of sprite - ginger ale. Blended… it… the sprite sweetened and made it easy to drink. Had that 2 hours before taking 10 mg rapa. Then, had the second fruit same way this morning. Easy peasy.