Mikhail V. Blagosklonny claims 6-7mg a week for a 27 year is too much. I’m 21 and take 4mg a week. Anyway know why he thinks its too much? Does he have evidence of this? I left him a comment asking him why he thinks this as I’m curious. As far as I know there are 0 studies on 20 year olds taking rapamycin for aging. 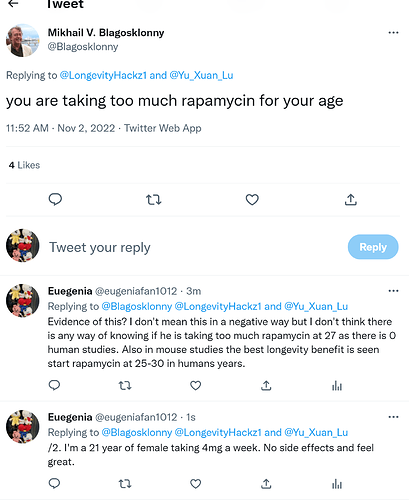 My view is that the frequency is too great, but I often say that.

IMO: The purpose of Rapa is basically to remove garbage (Autophagy) and a 20-something is unlikely to have that accumulation, as your immune system is functioning closer to peak.

Perhaps as impt, at age 20 - 35 or so, you want mTORC1 to function to help build muscle, etc, etc, rather than have Rapa shut it down – even for brief periods.

If one had cancer, or some serious illness at that young age, that may change the calculus.

Yes, it is primarily to remove the garbage, but there have been studies that show starting Rapamycin at an earlier age has a larger benefit. I think in the mid-20s is a great time to start taking Rapamycin. The biggest issue at that age is the cost.

Hey youngster! Keep in mind there’s emerging evidence that organisms may not need to be treated indefinitely, and it seems especially true for treatment started early in life. Young mice given a short treatment live as long as mice treated through their lives.

For your age, you’re probably fine with a handful of cycles and stopping. Meaning 6 or fewer months per annual cycle. Like 6 weeks on, 6 weeks off and do it for 3 years then stop. Over the next decade the data for humans will make things much more clear. I’d err on the side of caution at your age. You have so much time for and can resume in your 30s.

Mikhail V. Blagosklonny claims 6-7mg a week for a 27 year is too much. I’m 21 and take 4mg a week. Anyway know why he thinks its too much?

The simple answer here is that nobody really knows what the optimal human dosing is for rapamycin (for longevity) at any age.

Blagosklonny has opinions which seem well-based on research knowledge as he has outlined recently in the link below, but other people have pointed out to me that he’s not a medical doctor (doesn’t see patients), and his publications aren’t “peer reviewed” - they are opinion pieces in academic journals that he owns. Here is is rationale behind rapamycin dosing: 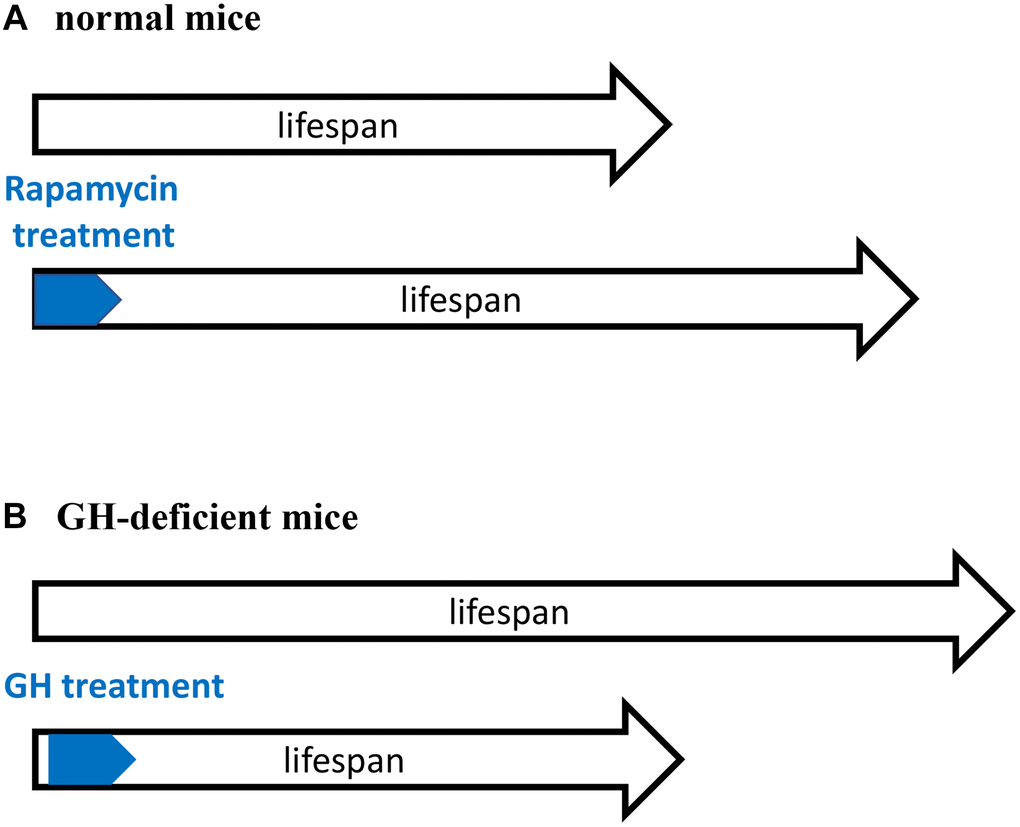 Given the lack of knowledge around the optimal dosing for rapamycin at any age, it becomes at some level a risk/reward calculation that people are doing. There is some risk with taking any medication (side effects, etc.) and some anticipated benefit. Between the ages of 20 and 25 the anticipated benefit is generally believed to be quite low because aging really hasn’t kicked in much at all. So most people here are rightfully suggesting that if the likely benefit is low, then people should also take the approach of minimizing your risk, and that is likely why Blagosklonny is suggesting a lower dose is most appropriate. That seems like an entirely reasonable approach. The question of course is how low is “low”. And again - we have little data to back that up.

Euegenia - you mention in the twitter thread that you are “getting no side effects and feeling great” - but are you doing, or have you done any blood tests to see what is actually going on in your body. Just “feeling great” is not frequently the best guide for what a medicine is doing in your body, so I’d recommend blood tests to check how things are going at a detailed level.

I came across this research study recently - that I thought was interesting (and again, it suggests significant aging starts to ramp up after age 25):

Changes in many measures of aging start getting worse (ramping up) as young as age 26, as this graph below demonstrates: 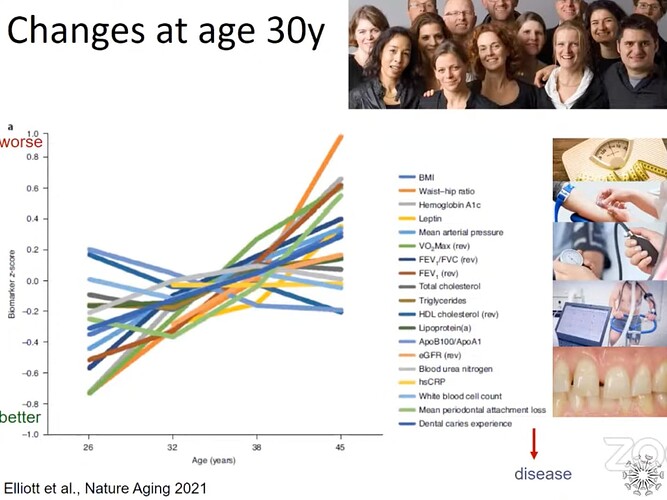 All the changes in the graph above are addressable by diet and exercise. Even if they were not, they are not addressable by rapamycin only. Some other supplement may do.

It is true, as some posted in JadeKarlie’s first thread, that you start aging from baby stage. But there is good aging (maturing - baby to teens, to mid 20s), and bad aging (getting old). I would step on the brakes if I reached the top of the mountain, and started going downhill. I do not think one who is 21 has reached the top of the mountain. I believe that starts after 30. True, 21 is full maturity. But the mountain may have a plateau, so you are not yet going downhill; you may be travelling the sweet spot of maturity, before getting old (downhill).

Except for female gymnasts, most strength and speed athletes peak in their mid to late 20s - sprinters, swimmers, and boxers. Ball playing requires skill, which may develop even later (soccer, basketball).

But if you insist on stepping on the brakes now, I concur with the opinion that a few months a year, at less frequency (every two weeks) would be my approach, were I of the same age.

There is literature, as well, that rapa acts as a senolytic. I doubt that you have as many senescent cells as a 6o year old, that you want to dose like a 60 or 40 year old. You may be using a fireman’s hose to put out a lighted cigarette.

Nobody knows the ideal dose, BUT there are some (Dr Blagosklonny for one) that suspect the body may adapt to rapamycin over time and gradually increased doses over time are needed the longer one takes it. This isn’t proven, but if it does turn out to be true, it would make sense to take an effective but small dose to start when you are in your 20s and give yourself “runway” to increase over time.

Dosing is all guesswork at this point, but that is one rationale for starting lower.

The human body tends to adjust and build up immunity to many different types of drugs. So this would not be surprising. However I have not seen any clinical research to prove this.

Actually, for transplant patients, do they need to take more and more as they grow older? The answer to that question will provide the correct response.

You might want to do bloodwork as @RapAdmin suggested to see if Rapa is doing anything. Rapa may increase blood glucose and lipids.

It’s also a good idea to do a Dexa scan to check your bone density. There are already examples of young people on this website in their 20s and 30s, prior to taking Rapa, having low bone density.

There are already examples of young people on this website in their 20s and 30s, prior to taking Rapa, having low bone density.

Where did you find this info, if I could ask? I can personally say that with a low BMI my bone density was not low (per a Dexa scan). And I may have missed it, but personally I had not seen such comments.

You can read “Rapamycin journey log” by @Perkiness to see discussion on bone density.

Thanks @RapAdmin for adding the link. I was thinking about doing that, but I didn’t know how to do it.

this is true, I’m in my 20s and prior to taking rapamycin I had lower bone density. According to my 23andme raw genetic data I have 3 specific genes that state I have “weaker bones”.

I believe my low bone density is due to lifestyle + some genetics. I can’t blame my genes entirely as I don’t do enough strength training and I was also very skinny during that last dexa scan. I’ll monitor closely with an updated dexa scans and improve my fitness & calcium/vit d/k2 intake.

Posted the 3 specific genes below. I got the weaker bones on all 3

I recommend getting some sort of genetic testing like 23andme to see if you got certain genes like myself that can cause you to have weaker bones.

@Jensen_Achilles Thanks for sharing the information.

Where did you feed the raw data to? are those images from Promethease?

You’re not going to get much additional benefit from starting this young and it’s common to not have physically matured completely until 25 or so.

I would personally lay off the rapamycin and try to put on as much muscle as you can and get as physically fit as you can, taking advantage of your peak biology. It will never be easier to get in top shape as it is right now at this age so try to max that out now so you can focus on maintaining in your 30s and beyond, rather than trying to build yourself up under harder conditions. Then I would revisit the rapamycin around 26 or so. YMMV!

Are there studies that imply it would be harder to put on lean mass while taking rapamycin weekly/biweekly?

I’m nearly 25 years old right now and may start taking Rapamycin for the first time soon, but am also very involved in strength training and don’t like the idea of limiting myself when I still wish to gain another 4-8 lbs of muscle before just maintaining

There aren’t any studies I’m aware of. I mostly meant that if one is focusing on longevity in early 20s, it could be better to focus on getting into excellent shape and leave the rapamycin until later, but not that rapamycin would necessarily get in the way.

That said, I don’t think knocking down mtor heavily for a few days a week is going to help a young person pack on muscle. Best case, it doesn’t get in the way. Worst case it slows you down a bit. I’ve heard some hypothesize that in older individuals, rapamycin gives a net benefit in building muscle in that even though you’re knocking down mtor for a few days a week, you’re also cutting down chronic inflammation and enabling cells to behave in a more youthful way.

I see what you mean. I was actually against taking rapamycin because of the mTOR suppression, but figured 3mg twice a month wouldn’t do too much to suppress muscle gain.

I’m already at high-intermediate strength with 11% bodyfat via DEXA scans so I feel close to a level where I think I’d be content physically. With that said, I do want to have one more serious bulk and cut cycle to gain maybe 5 more lbs of lean mass, so I’d like to see any studies that may suggest doses of 3-5mg rapamycin twice per month may noticeably inhibit growth for the first year of taking it.