Astaxanthin: A Potential Treatment in Disease and Aging, Lifespan Increase

Astaxanthin: A Potential Mitochondrial-Targeted Antioxidant Treatment in Diseases and with Aging

Carotenoids have gained special interest during the last decades, due to their strong antioxidant, repairing, antiproliferative, anti-inflammatory, and potential antiaging effects. They can be used to prevent oxidative stress-related diseases and chronic inflammation. Astaxanthin is one of the most powerful carotenoid on the market. In this review, special focus is oriented towards these compounds.

Recent human studies elaborate on the safety perspectives of natural astaxanthin, and so far, no documented negative effects have been found over its 20 years of consumption as a dietary [48]. Clinical studies have found that natural astaxanthin supplementation improved blood flow in humans [49] and enhanced blood rheology by increasing the flexibility of erythrocyte membranes [50].

Astaxanthin emerged in the spotlight because of its potential pharmacological effects, including anticancer [44, 51, 52], antidiabetic [53, 54], anti-inflammatory [55], immune-stimulating effects [44, 52], and antioxidant activities [55–59] as well as neuro-, cardiovascular, ocular-, and skin-protective effects [60–64]. Studies found that astaxanthin reduces the oxidative stress caused by hyperglycemia in pancreatic β-cells and improves glucose and serum insulin levels in diabetes [65]. Furthermore, it has been suggested that astaxanthin is a potential therapeutic agent against atherosclerotic cardiovascular disease [66]. In an elegant work, Barros et al. showed that “astaxanthin can directly cross the blood-brain barrier to reach different mammalian brain regions” [64, 67, 68]. Here, we summarize the effects of astaxanthin on metabolism, insulin resistance, and type-2 diabetes mellitus; furthermore, its advantages on muscle performance, recovery, and atrophy, and effects in the central nervous system and the skin will also be discussed.

Oxidative stress is characterized by an imbalance between prooxidant and antioxidant species, leading to macromolecular damage and disruption of redox signaling and cellular control. It is a hallmark of various diseases including metabolic syndrome,...

It seems that with this new data coming out of the NIA ITP program, astaxanthin is becoming one of the better, if not the best, evidence-supported supplements to help slowing aging.

Preliminary NIA ITP study results are suggesting a 12% median lifespan (in males) improvement in the mouse studies (the best of any supplement).

In the NIA ITP compounds listing - they say they are testing 4,000ppm of Astaxanthin in the mice. If someone has the time - please convert this to estimated human dosing levels in terms of mg/kg.

Richard Miller (NIA ITP program) said in his last interview that New, as of yet unpublished, ITP study astaxanthin improves lifespan in males (not females).

Video queued up for the Astaxanthin commentary below: 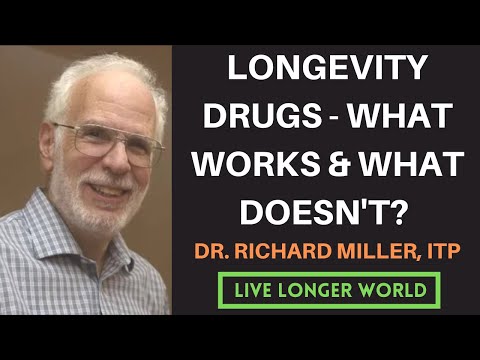 A good overview of the state of the science on Astaxanthin (on Examine.com):

The latest research on Astaxanthin supplements. Expert analysis on potential benefits, dosage, side effects, and more.

On the Neuroprotective Role of Astaxanthin: New Perspectives?

Astaxanthin is a carotenoid with powerful antioxidant and anti-inflammatory activity produced by several freshwater and marine microorganisms, including bacteria, yeast, fungi, and microalgae. Due to its deep red-orange color it confers a reddish hue... 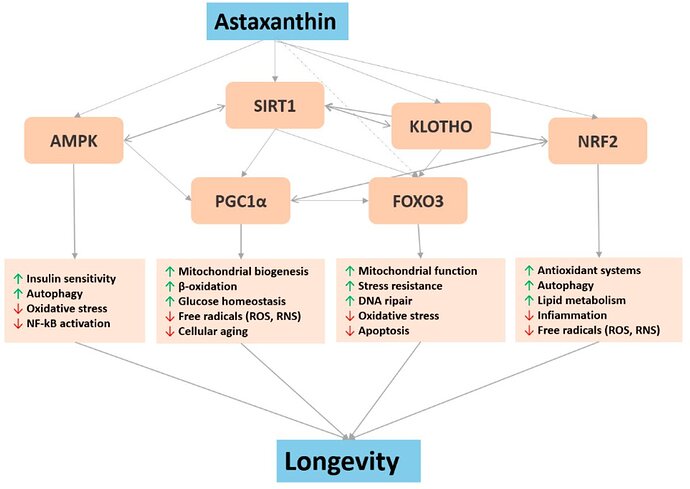 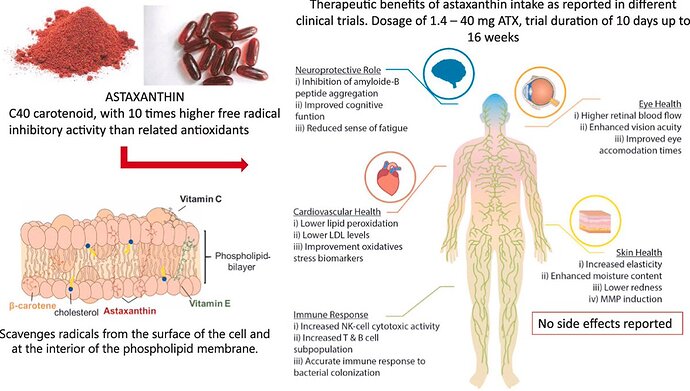 Astaxanthin in Exercise Metabolism, Performance and Recovery: A Review

During periods of heavy exercise training and competition, lipid, protein, and nucleic molecules can become damaged due to an overproduction of reactive oxygen and nitrogen species (RONS) within the exercising organism. As antioxidants can prevent...

Astaxanthin Improved the Cognitive Deficits in APP/PS1 Transgenic Mice Via...

Astaxanthin (Ast) is an effective neuroprotective and antioxidant compound used to treat Alzheimer's disease (AD); however, the underlying in vivo molecular mechanisms remain unknown. In this study, we report that Ast can activate the mammalian...

Astaxanthin: How much is too much? A safety review

An interesting paper from Europe that did in-depth analysis on several brands of astaxanthin. 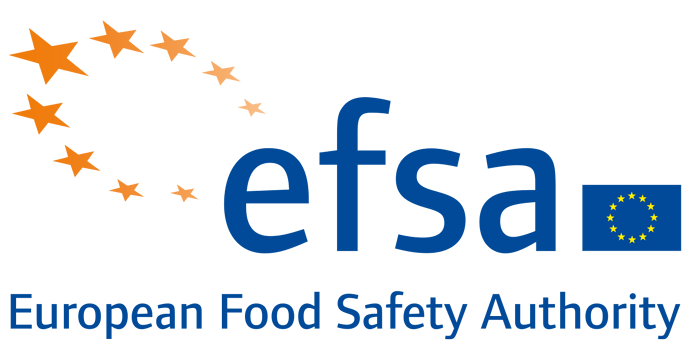 Scientific Opinion on the safety of astaxanthin-rich ingredients (AstaREAL...

Following a request from the European Commission, the EFSA Panel on Dietetic Products, Nutrition and Allergies (NDA) was asked to deliver a scientific opinion on the safety of astaxanthin-rich ingredients AstaREAL A1010 and AstaREAL L10 as... 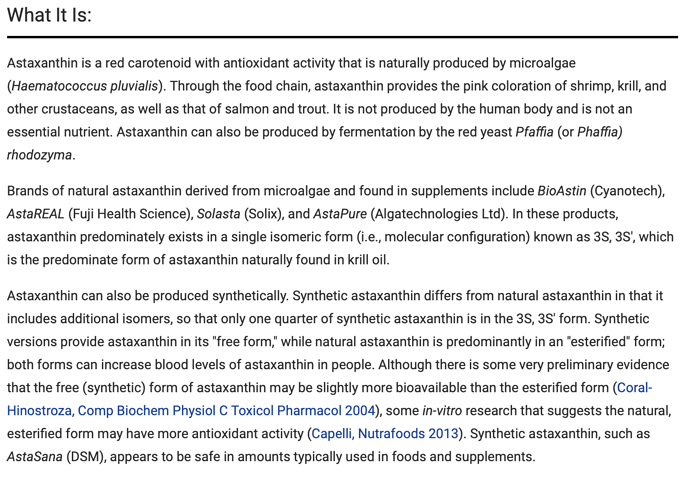 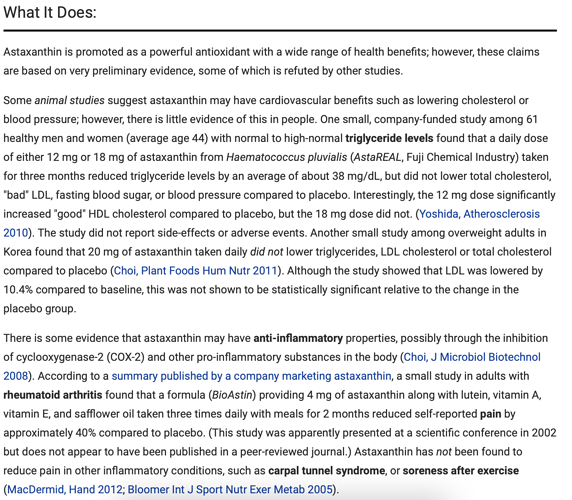 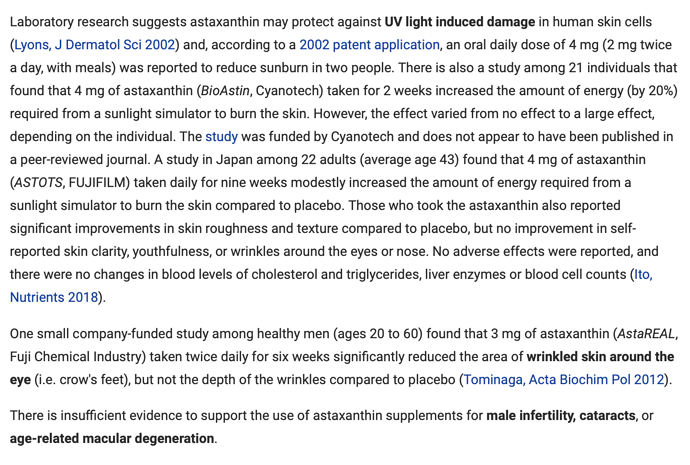 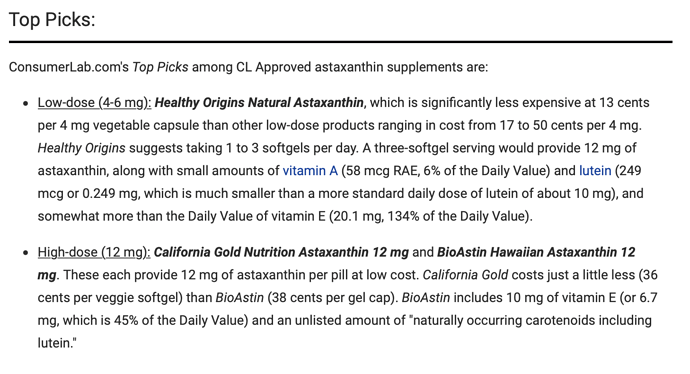 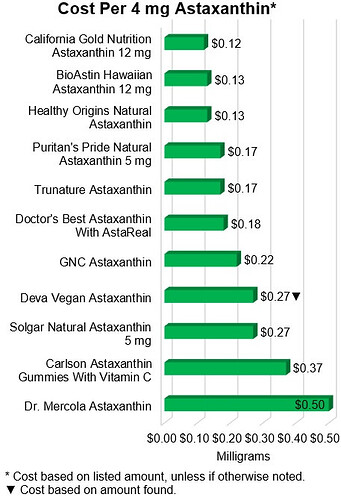 Now Foods is also a good brand I’m familiar with and which typically gets good reviews in Consumerlab - and it also works out to about $0.12 per 4mg (for comparison with the above table):

NOW Astaxanthin is a naturally occurring carotenoid that, due to its unique structure, performs an important role in cellular free radical protection and healthy immune system responses.* NOW Astaxanthin is derived from Non-GMO Haematococcus...

RapAdmin and anyone else. You taking Astaxanthin and if so, what dose?

Not yet - but probably will. We need to translate the 4,000ppm from the mouse studies to human studies. Perhaps someone can do that and show the calculations.

Here is an example one person did for Meclizine / Dramamine research:

Here is the math:

…“anyone else. You taking Astaxanthin and if so, what dose?”

I have taken /take it on and off, for several year when having any type of X-ray. I have taken/take several grams, yes grams. Several days before, the day and after. Use to purchase the Vitamin Shoppe brand.

FWIW, I recently have been using
Liposomal Astaxanthin Supplement that is 24mg per capsule. The last two bottles cost was less than .25¢ per capsule, 120 capsules was $23.59 with a coupon 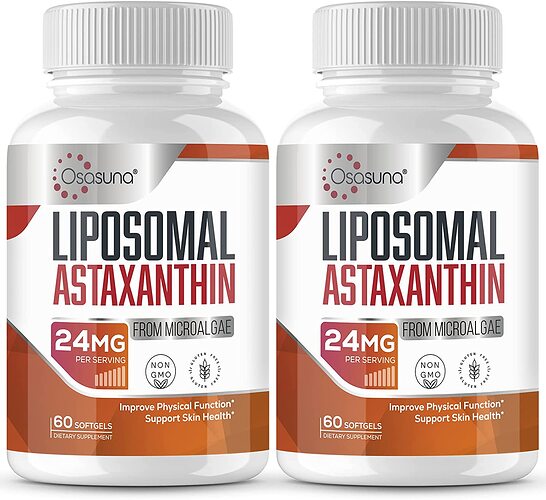 LifeExtension include 2mg in their EPA/DHA fish oil capsules.
If I’m eating the wild sockeye salmon (very pink so high in Astaxanthin) I’d only take two, if not I’ll take three or four each day.

A typical 10kg wild salmon with approximately 40 mg Astaxanthin/kg flesh, would convert 3.64g/day of Astaxanthin into eating over 9 whole salmons/day. 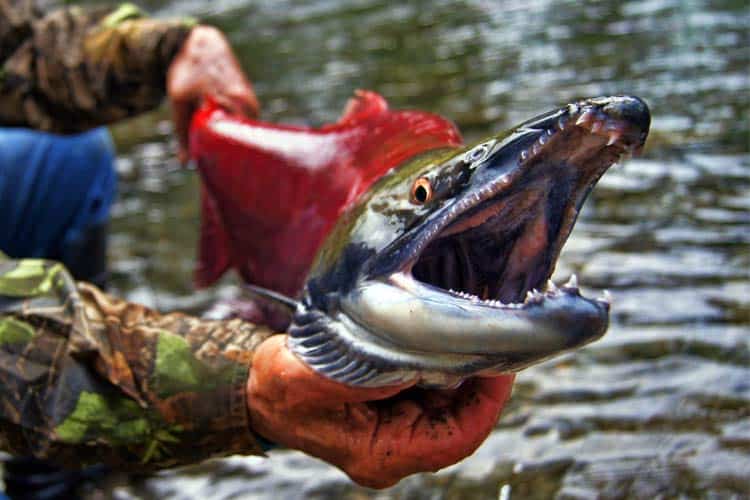 With 6,000x the antioxidant activity of vitamin C, supplements are one to benefit. These astaxanthin rich foods are another source for you.

Big astaxanthin believer and took it for years prior to rapamycin. Since starting rapamycin I get lower extremity muscle twitches after using it. They go away after stopping the astaxanthin. Some interaction between them. Not certain what’s causing it.

This study showing PPAR delta as an activator of pancreatic cancer got me wondering if astaxanthin may be problematic. Astaxanthin is a PPAR alpha agonist and I wanted to know if it affected the other PPAR’s as well. 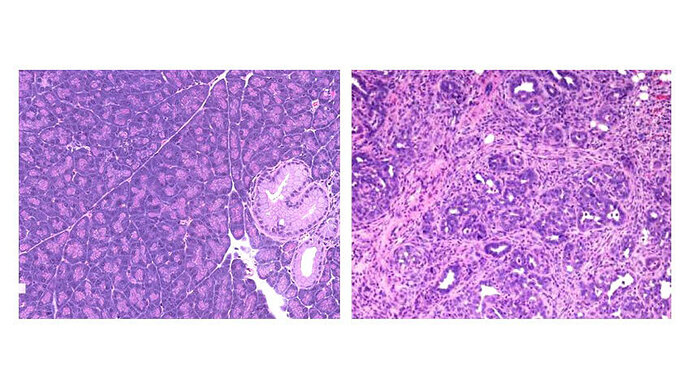 Fortunately it appears that it does not act as a delta agonist, and in fact has no affect.

Inhibition of PPARγ by Natural Compounds as a Promising Strategy in Obesity...

Since starting rapamycin I get lower extremity muscle twitches after using it.

What dose of Astaxanthin were you using in this situation?

12mg per day. A fairly high dose so I’m thinking that maybe 4 mg would be okay.

I get similar random muscle twitching, dramatically worsened by any kind of curcumin supplement (so I avoid curcumin). Took me forever to link it to curcumin, and I still have no idea what the mechanism could be.

Well, now that you mention it, curcumin also does it as does green tea extract. I have to avoid all of them for the first 3-4 days after my rapamycin dose or the twitching is a real nuisance, and also I start thinking that I have some neuromuscular disease.
What could it be? Is it some kind of excessive neuromuscular activation? What’s the role of rapamycin.
I think curcumin and green tea inhibit mTOR to a certain degree. Does it excessively inhibit muscle cell proliferation when used in combination and the muscles compensate by some sort of hyperactivation?

Curcumin is a component in the Asian spice turmeric which has demonstrated anti-inflammatory, anti-oxidant and anti-cancer effects in animal models of…

I take one of these daily for several years now, never noticed any effect. 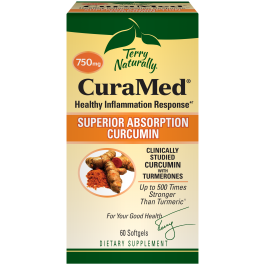 Thanks. That could explain it.