A primer on Lithium, Lithium + Rapamycin & other Lithium salts with potentially more stable and safer pharmacokinetics

Seems like a few people here (ie @desertshores) take Lithium orotate as there is some suggestive evidence in animal models that it may extend lifespan when taken with rapamycin, while also reversing dyslipidemia from rapamycin.

I wonder if anyone has any blood work showing this in humans. If so, please do share dosing and bloodwork!

For those who are not very familiar, I suppose I can do a quick introduction on lithium from my second look at the combination and what lithium does:

This PNAS study found large synergistic effects of lithium, trametinib, and rapamycin in a fly model:

The study noted given the complex nature of the aging process, it is extremely unlikely that the most effective “antiaging” therapy could be achieved by a single compound with a single target, as almost every other “antiaging” researcher has suggested. This study showed non-additive effects on lifespan with combination therapy being significantly greater than when taken separately. Essentially, “1+1=3” and “1+1+1=5”. Not only that, fertility was preserved.

MOA related to anti-aging
Lithium has multiple possible targets and I will not go through every single one of them - just the relevant ones for anti-aging. It appears that micro-dose Lithium may induce mitohormesis and xenobiotic detoxification via the GSK-3 and NRF2 pathway. GSK-3 regulates the Wnt/B-catenin pathway. Lithium may increase stem cell activity and increase the transport of Vit B12 and folate. Lithium may also increase autophagy and mitochondria. However, some of these effects are not proven in humans. In humans, it appears to increase neurogenesis and neuroprotective factors, and increase cortical gray matter, white matter, and limbic structures (ie hippocampus, thalamus, amygdala) from MRIs of bipolar patients.

Pharmacogenetics
In a GWAS for bipolar disorder patients, 4 linked SNPs on chromosome 21 met genome-wide significance criteria for an association to monotherapy lithium response in a large sample size.

Genetic variants associated with response to lithium treatment in bipolar...

Safety studies
From my understanding, >5 mg lithium intake has not been tested for safety. There are observational studies that go up to 3 mg per day in drinking water. There are a lot of possible drug-drug interactions with lithium and doses can increase manyfold. Especially in older people, those with low salt intake, kidney impairments, and/or dehydration. There are plenty of interacting drugs, including but not limited to - NSAIDs, ACEi, and antibiotics. This letter implied that >5 mg of lithium orotate could be potentially unsafe:

The widespread availability of medications and herbal products on the Internet has increased the potential for poisonings. We are reporting a case of mild, acute lithium toxicity occurring after the intentional misuse of a lithium-containing “dietary...

Pharmacokinetics
The half-life of lithium is ~24 hrs. It takes at least 4-5d for serum lithium concentrations to reach a steady state after dosing is changed. Fingerstick tests of lithium levels are available for 12-hr serum trough levels.

To mitigate some effects of high doses especially since lithium has a very narrow therapeutic window in bipolar disorder - this study tested lithium salicylate and lithium lactate with very different results - very steady with lithium salicylate in both plasma and brain over 48 hrs, as opposed to lithium orotate which spikes: 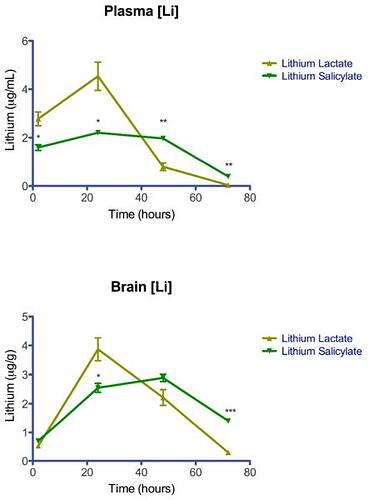 Despite its narrow therapeutic window, lithium is still regarded as the gold standard comparator and benchmark treatment for mania. Recent attempts to find new drugs with similar therapeutic activities have yielded new chemical entities. However,...

Yes - I take 5mg of lithium orotate on a fairly regular basis. Your coverage of potential benefits of lithium salicylate is interesting - but it doesn’t seem to be something that is easily available, at least on Amazon (as lithium orotate is).

Last year a study came out that put a bit of a damper on the speculation around lithium and aging, as can be seen here:

Still, I think 5mg of Lithium Orotate is a reasonable bet, and I’ve not noticed much positive or negative while taking it. I’ve not done any rigorous pre/post blood testing, that might reveal blood lipid benefits, etc.

There was a recent story on this topic of microdosing lithium: https://neo.life/2020/11/lithium-the-next-trend-in-microdosing

The Alzheimers Drug Discover Foundation did a good summary on the compound back in 2016, but it hasn’t been updated since:

As I have previously posted I have been taking lithium orotate since the late 80s or early 90s, can’t really remember. The brand I am taking claims to deliver 5mg elemental lithium per tablet.
I take 3 tablets daily.

I was taking it for “anger management” issues I was having while driving in Germany, at least my wife thought so,

. I really do believe it reduces quickness to anger and dramatic mood swings.

So, I have been taking it with rapamycin since early November 2021.
I did notice my lipid levels increase after I started taking rapamycin.

Seems relatively safe, at least for me.

A toxicological evaluation of lithium orotate
“Lithium orotate, the salt of lithium and orotic acid, has been marketed for decades as a supplemental source of lithium with few recorded adverse events”

Lithium orotate, the salt of lithium and orotic acid, has been marketed for decades as a supplemental source of lithium with few recorded adverse events. Nonetheless, there have been some concerns in the scientific literature regarding orotic acid,...

There is just a whole lot of variability with Lithium levels as noted in bipolar patient populations, even when dosed carefully such that ER visits are common.

Now of course you are taking a much, much lower dose than bipolar patients (300 mg?), so the relative safety will likely be much higher. But just pointing out that there is no guarantee that this will apply to everyone (there is plenty of genetic variabilities) or that it will be safe, not to mention - a lot of possible drug-drug interactions - adding a new supplement or drug can increase the risk of bipolar patients going to the ED by 30x.

Did you check lithium levels via low-cost fingerprick and lipid panels with and without rapamycin? Have you noticed effects at lower doses? Would be curious if you can share.

If you also have any lab work with Urinalysis, eGFR / Creatinine / blood urea nitrogen, thyroid / TSH, and parathyroid / calcium function. Even ECG would be nice before and after.

It does seem to support some extra healthspan in male mice specifically with some clues to MOA corroborating other mice studies i.e. suggestive of prevention of renal inflammation and delayed age-related loss of glucose tolerance via GSK-3 inhibition and proteostasis. The GSK-3beta hippocampal data is in agreement with previous mice studies. The rotarod performance was increased which could be suggestive of neuroprotective effects, but the fat loss sort of threw it off.

They didn’t really check everything associated with other mice studies - there was anti-neuroinflammatory via NFKB from GSK-3 inhibition, reduced oxidative stress via NRF2, proteostasis via IMPA inhibition induced autophagy, neurogenesis via CREB/BDNF and Wnt.

I’d also note for context - mice tend to die of cancer especially based on their stated 20 C protocol (normally at ~30 C, so this is really cold for them) - not only that - the strain used is sensitive to cold conditions. This is important because they get cancer, but are less likely to die from CVD (see Lithium and GSK-3/Wnt). It might throw off lifespan results.

Mice also tend to lack external stress/lower ROS generation in those lab conditions (see Lithium and NRF2) while specifically, that strain doesn’t really have decent induction for NRF2. Mice also don’t get AD - so it’s kind of hard to say what to make of the human studies that suggest slowing of dementia.

Unfortunately, don’t have any before and after data to share. Because of Covid shot reactions, variable rapamycin, and a mild case of Covid. My blood work has been all over the place for the last two years. Also, factoring in other changes in my supplements I don’t think I have anything meaningful to share. These are some of my most recent results from 07/21/22

I’d be interested to look at a fingerprick test for Li, say 1-2 hours after taking it if you happen to have a convenient option nearby.

It’s pretty low cost (~$12) though if you happen to be interested too:

I just uploaded the thyroid panel. In the interest of science, I will look into lithium tests.

Quest Diagnostics has the test. It is $38, I will get it tested next time it is convenient, probably towards the end of the month.