Spermidine: a physiological autophagy inducer acting as an anti-aging vitamin in humans?

Spermidine: a physiological autophagy inducer acting as an anti-aging vitamin in humans?

Spermidine: a physiological autophagy inducer acting as an anti-aging vitamin...

Spermidine is a natural polyamine that stimulates cytoprotective macroautophagy/autophagy. External supplementation of spermidine extends lifespan and health span across species, including in yeast, nematodes, flies and mice. In humans, spermidine...

Spermidine is unusually high in the incredibly long lived naked mole rat, a species under intense scientific study to elucidate its longevity pathways/signature.

Although this rodent has a similar size as the laboratory mouse, it lives 10-20 times longer without showing any visible signs of aging!

“The few metabolites that have been most convincingly linked to health-improving and antiaging effects in mice include two vitamins (B3, E) and polyamines. Nicotinamide (also called niacinamide, vitamin B3), which is known to extend health span and lifespan in mice [31,32], tend to increase in naked mole-rats and actually augmented with age in this species but not in mice (Figure 6a). The potent antioxidant α-tocopherol (vitamin E), which can enhance the lifespan of short lived mouse strains [33, 34], was also increased (Figure6b). Several polyamines (cadaverine, N8-acetylspermidine, N1,N8-diacetylspermidine, but not ornithine nor putrescine) were elevated in the long-lived species (Figure 7). Importantly, spermidine and N1 acetylspermidine declined in aging mice, but remained at high levels in aging naked mole-rats (Figure 7c, d), echoing an abundant literature showing that spermidine supplementation promotes longevity in mice and other model organisms [35–38] and that increased nutrient uptake of spermidine reduces cardiovascular and
cancer-related mortality in humans [39–41].” 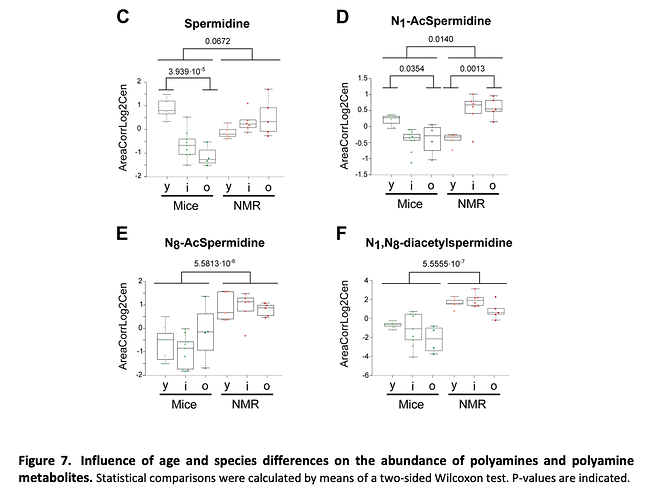 Natto (fermented small soybeans) are a great natural source of spermadine and related compounds…also provides nattokinase, which is proported (limited but very favorable clinical trials) to have positive effects on various factors in CHD.

Also wheat germ is high in spermidine as is cheddar cheese aged over 1 year.

Not much in rest of foods.

Supplement are expensive so foods better.

100%! I dumped my expensive Spermidine supplement for daily Natto/10 yr old cheddar. Must be getting about 50 mg/day +/-, plus all the other nutrients in super nutrient rich whole foods.

There are some mushrooms that have excellent Spermidine, but availability an issue. 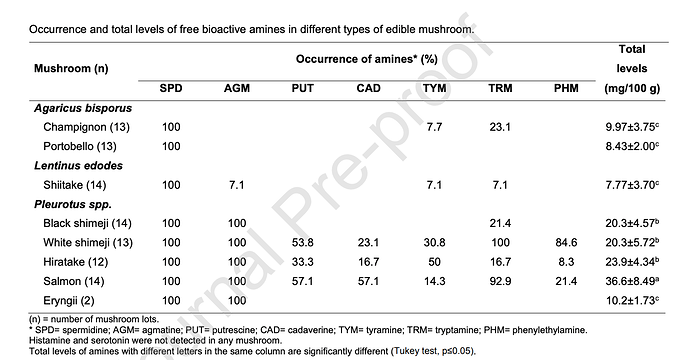 Green peas also appear to be a good food source of spermidine, and less calorically dense than aged cheddar cheese. I’d love to get all my spermidine from cheese, but my waist line would not approve haha

Polyamines in foods: development of a food database

Knowing the levels of polyamines (putrescine, spermidine, and spermine) in different foods is of interest due to the association of these bioactive nutrients to health and diseases. There is a lack of relevant information on their contents in...

Unless you are vegan, 10g of aged cheddar is only about 50 calories, but delivers approx 20 mg Spermidine.

Of course, cost wise 1 year old cheddar is about 6X the peas

Calorie for calorie…broccoli and cauliflower best bet for spermidine.

I have been using the product that RapAdmin mentioned, yes I ordered it from Germany. Was not able to locate this product in the US
Has 5mg per scoop / 1mg per gram 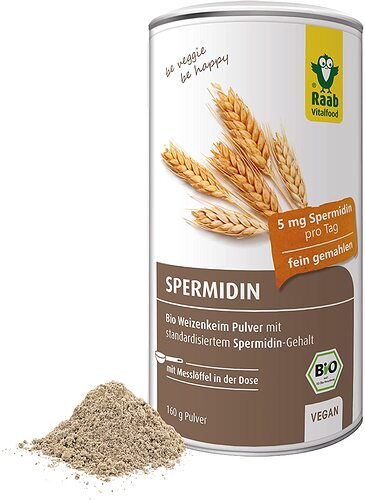 MAC, could you please provide a link/reference for the levels of spermidine in aged cheddar cheese? Thank you!

I believe MAC was off by a decimal point. Cheddar has 2 mg per 10 grams, not 20. Still not insignificant as the average daily intake of spermidine in USA is estimated to be about 10 mg/day.

If you go to this thread. I posted a document that shows amounts in foods. There is a list of the top 10 foods and amounts.

Natto is really the super Spermidine food. At about 340 mg/kg natto, a typical 50 g serving would deliver about 17mg.

I eat a serving of Natto, approx 50g and about 25g of 10 yr old cheddar daily, so total Spermidine before other food intake, approx 20-25mg/day. 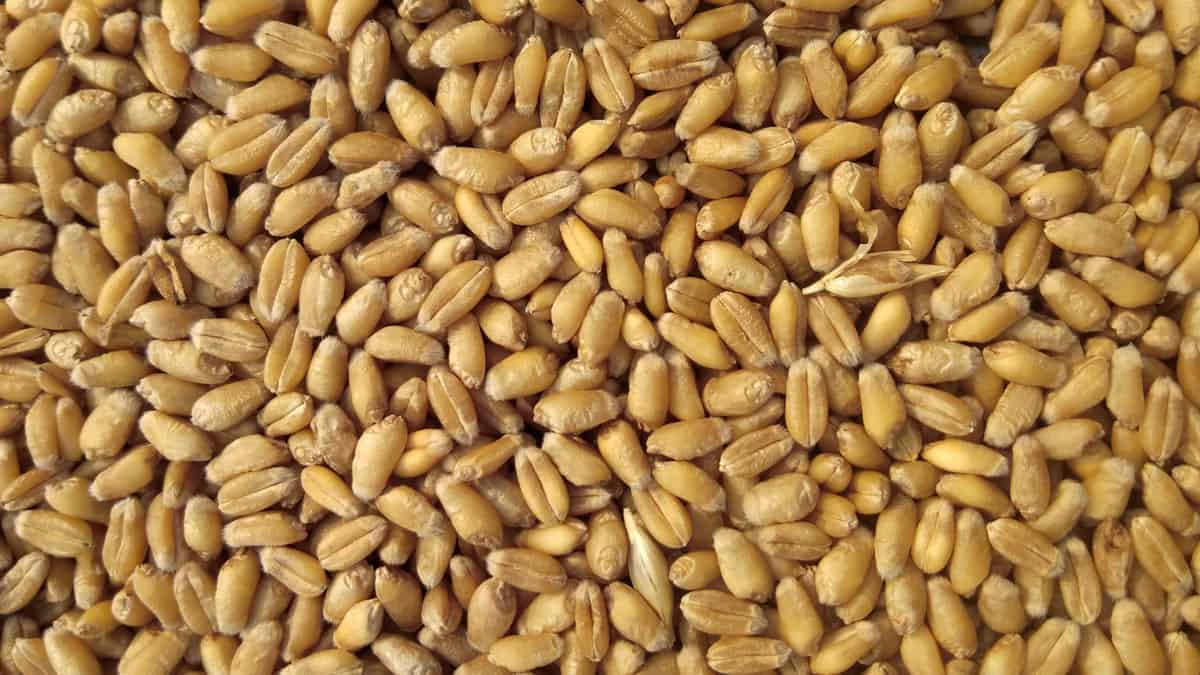 Here you will find the foods that have a particularly high content of spermidine at a glance. Learn more here!

The real question, is it possible to even hit close to optimal with food sources that usually would either be too hard to eat enough of or contain some other component that would be suboptimal at a high amount.

Sidenote : Regularly cooked soybeans seem to contain as much spermidine per weight as natto, so it should work similarly as a dietary source.

hmmm…looking at food/spermidine content table, I doubt very much anyone in the modern world is getting anywhere near 10mg Spermidine just from food intake.

The Japanese eat at lot Natto, and Cretans/Sardinians eat a lot of aged cheese. I’ll roll the dice and add these foods daily to my hacks in lieu of other dietary choices.

Unfortunately, spermidine supplementation may not work. Rich Miller PhD (director of the ITP) gave large doses to mice over 6 months and found no increases above baseline in serum or various tissue/organ levels of spermidine. Based on this fact, they didn’t even bother to proceed further with doing a study. Maybe the picture will be different in humans, but in mice at least, it appears that spermidine is very tightly regulated. See my post about the new interview with RM on Live Longer World.

Unfortunately, none of this stuff ……natto or spermidine or otherwise….might work. There is a fair amount of work on humans and several large population studies indicate significant increases in lifespan attributed to increased spermidine intake from foods I am not sure if I saw bloodwork trials but think so. I believe the spermidine intake shows up in blood as spearmint, another polyamine with related activity.

Who knows? But I believe it is Ill considered to discard a possibility based on a single top of the line screening when so much other information says otherwise.

You have to remember that wild type mice only die of cancer.

Humans die of dozens of diseases, cancer is just one of. Everything we eat, drink, the supplements and drugs we take, the air we breathe, amount of sun exposure, sleep, our lifestyle choices and interventions, and of course our unique genes, alters literally millions of pathways.

A single molecule might not prevent cancer in wild mice, but have a meaningful impact on humans in other longevity enhancing pathways.

As an example, studies on transgenic mice that are bred/engineered to express human Alzheimer risk genes because wild type mice do NOT ever die of Alzheimer disease! Billions have been spent on experimental drugs given to these mutant transgenic mice for hope in clinical translation…all models have failed to translate to understanding root cause Alzheimer’s in humans. Many big Pharma companies have abandoned the space due to failure and complexity.

The best way to measure true longevity extension in humans is “all cause mortality”. For a person to live longer, he/she must push out all chronic disease, not just a single mortality pathway.

Excitingly, Rapamycin has been shown to increase lifespan in wild type mice, improve other unique human disease transgenic mice models (CVD, neurodegenerative), and extend other mammalian models. It’s one of the most robust and safe (in humans) speculative longevity small molecules we have. Until something better comes along, many of us are adding it to the intervention stack.

Let’s hope it translates to humans, but we are sorely lacking good human trials. Off patent, so very hard to fund.

Right, I was talking about spermidine not rapamycin. Rapamycin has held up extremely well (and repeatedly) in the ITP trials. Spermidine supplementation didn’t even budge the tissue levels in the mice, so the ITP researchers didn’t even bother to proceed with the study. I see this as a caution for spermidine that it may not work as a supplement, but not the last word by any means.

Theres no study, if hes making a point to talk about it and then conveniently using the no results as a reason for there not being a study this is just a rumor, a rumor from a PHD is still just a rumor. How large is a “large dose” … spend 6 months giving spermidine to mice then not even publish the results as a study (even no rise in tissues is a result). The whole premise sounds fishy.

Im not even currently taking any spermidine.