Nice forum here. I am very fascinated by all the intelligent posts and am fascinated with this field. 44 Year Old Male- good health, slight trend towards pre-diabetic (lowest point of “high range” on bloodwork), not obese but certainly could stand to lose 5-10 pounds, not very active (working on it :), Bio-Chemist (pharmacologist)

I feel that Palmitoylethanolamide, an endogenous fatty acid amide that primarily works via the PPAR-alpha receptor, Orphan Cannabinoid Receptor, and by partially inhibiting FAAH which metabolizes Anandamide (AEA)- endogenous CB1 receptor agonist similar to THC in effects but breaks down to quickly to demonstrate psychoactive effects- keeping AEA active, and the molecule’s ability to stabilize Mast Cells (filled with pro-inflammatory compounds Cox-2, PDG2, histamines, cortisol, serotonin) from bursting open and releasing these agents should be considered part of the legitimate longevity agents as well.

PEA reduces pro-inflammatory cytokines in the blood, is an immunomodulator, reduces cholesterol and triglyceride levels (dropped my total levels by 55% and 59% respectively in 12 months with no change in dietary habits).

See Study below where administration of PEA significantly reduced inflammation and extended survival in aged mice with bacterial meningitis.

PEA is not-psychoactive and readily available but I would highly recommend the “Micronized” form. The molecule itself has shown itself to be too large to be well dispersed throughout the body when taken orally, so pulverized through a jet-mill, the particles are small enough to show greater absorption in tissues and blood.

Unless you happen to be in Italy or Spain (where Ultra Micronized PEA is available OTC and cannot be patented) it is tougher to find as FSD Pharma bought the world patent rights to this even further pulverized version, showing the greatest absorption and bioavailability in the body and is currently testing UM-PEA in clinical drug trials.

Moreover, no soft-tissue infections in the 2 years since I began using it. Not sure if coincidence or the PEA.

Looking forward to being part of this forum and reading about all your experiences and new advancements: 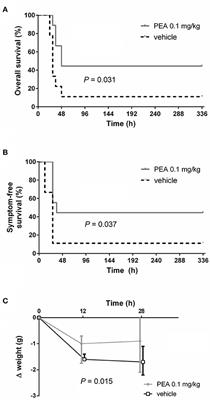 Easy-to-achieve interventions to promote healthy longevity are desired to diminish the incidence and severity of infections, as well as associated disability upon recovery. The dietary supplement palmitoylethanolamide (PEA) exerts anti-inflammatory...

“…We have shown that exogenous PEA promotes pathogen uptake by microglial cells in young animals without the concomitant release of pro-inflammatory mediators that contribute to brain damage in bacterial meningitis. During aging, senescent dysfunctional microglia acquire a chronic pro-inflammatory phenotype. Primed/reactive microglial cells amplify and prolong inflammation upon infection, and exacerbate neurocognitive disability in elderly patients…”

How did you decide on your PEA oral dose and schedule? The linked mouse study had PEA given intraperitoneally.

While many drugs reduce inflammation and cholesterol, what made you decide to take this one?

Here is a nice summary of lipid modulators of immunity. See sci-hub for full text.

Bioactive lipids as modulators of immunity, inflammation and emotions - PubMed

Lipids are not only constituents of cellular membranes but also key signaling mediators, thus acting as 'bioactive lipids'. Among the prominent roles exerted by bioactive lipids are immune regulation, inflammation and maintenance of homeostasis.... 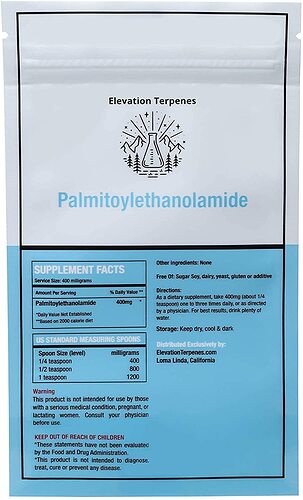 Palmitoylethanolamide, or PEA, is produced in the body naturally to combat pain and inflammation. Many animals and plants also produce PEA. The highest amounts can be found in soy lecithin, soybeans, egg yolk, peanuts,...

Interestingly enough, I became an avid believer that the Endocannabinoid System (ECS)- which now includes (to the best of my knowledge- CB1, CB2, PPAR family of nuclear receptors, FAAH inhibitors, 2 Orphan Cannabinoid Receptors, GABA A receptors, and certainly more) as well as pretty much mediates nearly most or a darn lot of chemical processes in the body through cell signaling (ex. Benzodiazepines do not work in CB1 knockout nice and the binding of our endogenous THC, “Anandamide” or AEA to the CB1 receptor releases dopamine re-inforcing and rewarding nicotine, stimulant, and alcohol use). There is a whole lot more but around 2000 I became a believer that the ECS is the body’s central homeostasis system.

In 1974 or 1975, an Italian MD and her team won the Nobel in Medicine for their work detailing how PEA works in the body. The Italian Govt made her a “Senator for Life” but just recently this “atypical Cannabinoid” is just really starting to get attention.

Endogenous molecules cannot be patented, as you know, so a small European firm (Epitech) discovers when you pulverize the molecule, oral bioavailability and topical use became much more effective - earning the world wide patent rights (except for Italy and Spain where the molecule., PEA, cannot be patented in any form), until 2034. You To their credit, one of the co-founders of Shire Pharma (who converted their then frowned upon Amphetamine drugs for Weight Loss into Adderall for ADHD) and others started a private firm in Arizona, Prismic Pharma, buying all the rights for Ultra-Micro PEA, from Epitech. After
licensing UM-PEA to veterinary drug maker X for dogs, they sold the company (I believe all for stock and still an operating subsidiary) to then Canadian Cannabis company FSD Pharma. Upon FSD’s acquisition, they completely transformed their company’s direction, selling if Cannabis products and facilities to pursue UM-PEA for drug development.

You can do the research, plenty of it, but PEA is a superb for combating inflammation via down-regulating TNFa, a number of pro-inflammatory biomarners, via immunomodulator, etc- also by increasing CB2 receptor expression. Numerous studies note anti-cancer adjunct therapy properties and lowering if triglycerides and fats like Fenofibrate does at the PPAR-a receptor. It’s a nueroorotectuve agent as well, so much to say.

Yes, I believe the photo posted was the UM-PEA as a research powder, not as “Normast” available in Italy from Epitech though: 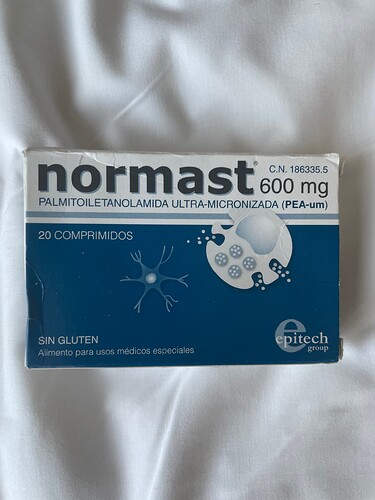 Interesting, PEA’s counterpart endogenous fatty acid ‘amide Oleothanolamide (OEA) also binds at the PPAR-a, but at the other Orphan Cannabinoid Receptor than PEA. In does increase AEA active levels in the blood, but is said to have an appetite suppressant effect. Not quite like a CB1 receptor antagonist (THC-V or the now removes synthetic Accomplia), but rather through reducing the currents from AEA and apparently by reducing appetite by releasing dopamine in the gut to make you feel full.
Not sure, but great for nuerobfkammation, particularly when using ethanol:

Neuroinflammation is a complex process involved in the physiopathology of many central nervous system diseases, including addiction. Alcohol abuse is characterized by induction of peripheral inflammation and neuroinflammation, which hallmark is the...

“…Exogenous administration of OEA blocks the alcohol-induced TLR4-mediated pro-inflammatory cascade, reducing the release of proinflammatory cytokines and chemokines, oxidative and nitrosative stress, and ultimately, preventing the neural damage in frontal cortex of rodents. The mechanisms of action of OEA are discussed in this review, including a protective action in the intestinal barrier. Additionally, OEA blocks cue-induced reinstatement of alcohol-seeking behavior and reduces the severity of withdrawal symptoms in animals, together with the modulation of alcohol-induced depression-like behavior and other negative motivational states associated with the abstinence, such as the anhedonia…”

PEA seems to be complementary to rapa: rapa might elevate blood lipids and glucose for some people, while PEA has opposite effects, while also lowering overall inflammation. One way it helps lower blood glucose is by increasing CB2 receptor expression, which facilitates calcium entry into the pancreatic (insulin-producing) β-cells.

I found this via Google, no idea if this company is reliable or not, and it’s “micronized” PEA as opposed to ultramicronized. However, it’s a good price ($20 for 90 400mg capsules). What do you think, ChronicMneomonic? 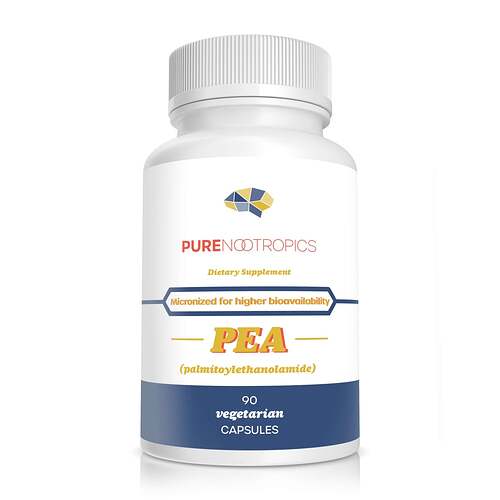 Oooh, and check this out:

Amazon has this product in a supplement called Mirica Advanced, which claims a 2x absorption with their tech. Also, a company called Nootropics sells PEA in capsules as well as powder, and they claim in the Q&A that it’s micronized (although not on the label, perhaps to avoid getting sued?).

Micronized PEA is available readily online- it is much better than straight PEA (PEA) and more effective but if I were using a Micronized version I would suggest Mirica with Luteolin which complements the PEA so well- Mast Cell stabilization near perfect- IL-6 & TNFB greatly reduced from Mast Cell control, reducing cascade of downstream neuroinflammatory processes and HPA activation. Micro PEA, Luteolin, and absorption enhancer- always take OEA or PEA with a bit of fat for best absorption. For high cholesterol or triglyceride levels, pain - particularly neuropathic, anxiety- PEA increases biosyntheses of neurosteroid Allopregnanolone (acts as an endogenous anxiolytic agent), 6000mgs 2x daily. If improvement seen you can get down to 300mg 2x a day. As a Biochemist and a person, I am very much a skeptic but PEA really is an amazing molecule. 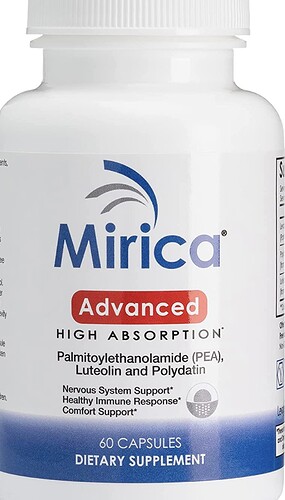 I also certainly am considering, currently with no credentials as a longevity expert

With it’s neuroprotective properties, potent anti-inflammatory action, Mast Cell Stabilization, cognitive enhancing benefits, cholesterol and triglyceride lowering properties, antiviral properties, immunomodulator activity, pail relieving and opiate sparing effects, potential for mood disorders via higher levels of AEA in blood via inhibition of FAAH, etc. I do believe a few week break should be taken several months of daily use to make sure the PPAR-a receptor remains very much expressed and not down regulated.

Stiefel Pharma was able to make a skin cream called Physiogel Calming Cream that has a low dose of PEA but in a unique liposomal delivery method so absorption is high under the radar. PEA has been shown to increase collagen production topically, soothe inflammation, and offers UV protection. 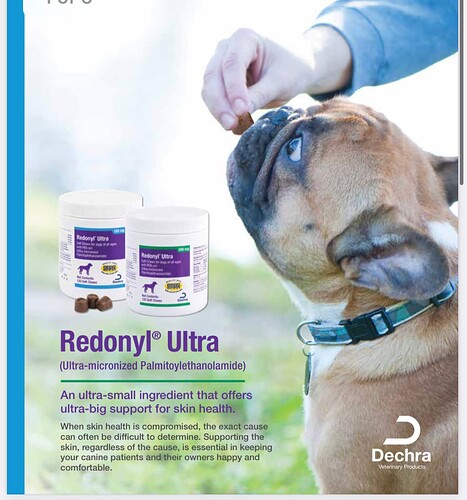 Dechra has the rights to UM-PEA in dogs for skin conditions. Likely arthritis soon.

I think I’ll take a shot with the micronized PEA. Rally like the idea of taming the cytokines associated with inflammation.

Will ultramicronized PEA dissolve in MCT oil? If so, it should be pretty easy to dump some powder in with some high quality MCT (in the appropriate ratios) and then dose it as a liquid.

So in the Q&A on Amazon, the makers of Mirica point out it is not micronized but rather absorption-enhanced via their lipid dispersion process. They point to data showing it is 1.75x better absorbed than standard PEA, but there’s no comparison with micronized or ultramicronized PEA (hmmmm…now why would that be, I wonder…)

Absolutely, FSD Pharma (NASDAQ: HUGE) has seriously F’d up on their UM-PEA development. As a one time large share holder, their was a recent proxy fight to change the board of directors and they have reorganized. Also acquired Lucid Pharma with Psilocybin for certain conditions.

Great info. Also- this company is working on a pro-drug to PEA as FSD has screwed the pooch so to speak, soon to be irrelevant. Terrible management (look at Titan Pharma and the tech they held- NASDAQ: TTNP) will ruin a company. 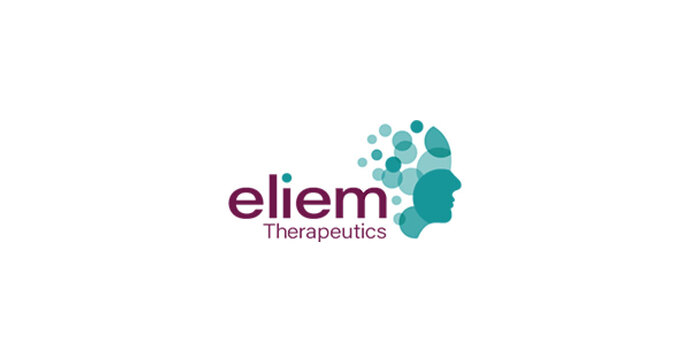 I cannot access this article and am very interested in reading it.Sci-hub does not have it. Thank you so much for your elucidation of P.E.A and O.E.A

Hi, and welcome to the Rapamycin news website. I tried searching on this article… and it seems Sci-hub.se does have the article - you just needed to search on the DOI number. Here it is:

I just started PEA and have a couple of questions: when during the day and relative to meals is it best taken, and should you mix it with a fat for better solubility, or just with water?

Can you take PEA and OEA at the same time? I am intrigued by Bioactive lipids. Thank you so much.

Thank you for your excellent observations about PEA and OEA. Since they are both PPAR agonists do you think it is O.K to supplement with both at same time? Thanks you.
Shulamit Leiter