New Paper: Summary of the top FDA-approved Drugs that can be Repurposed as Gerotherapeutics / Geroprotectors

Geroscience-guided repurposing of FDA-approved drugs to target aging: A proposed process and prioritization

How they sorted the drugs: 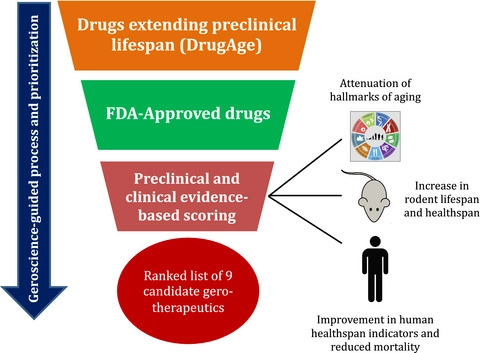 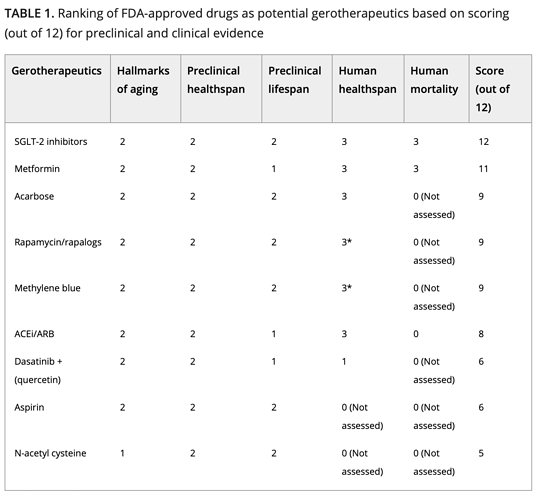 A new paper that ranks the top anti-aging drugs, with a slightly different ranking and rating system that I’ve seen before. But no new therapeutics here - just a slight reranking of all the usual suspects.

Of course, animal studies of the combinations of all these different drugs are long overdue. Many people are already combining these drugs in their own personal anti-aging cocktail, but we really don’t know the combined effects of the drugs.

The profound effects of SGLT2i on healthspan and lifespan in both animal models and humans may result from the pleiotropic effects beyond renal glucose and sodium handling, including improved mitochondrial function, restoration of autophagy, and promotion of ketogenesis-dependent dampening of mTORC1 hyperactivation (Durak et al., 2018; Korbut et al., 2020; Tomita et al., 2020). We also identify several drugs that, like metformin, are relatively low-cost molecular entities with a well-established safety profile, representing possible candidates for inclusion in a geroscience-guided clinical trial modeled after TAME, and aimed at probing whether a predefined cluster of age-related diseases or well-characterized loss of function can be significantly delayed using an approach based on targeting aging biology. Moreover, our geroscience-guided literature-driven approach is concordant with previously proposed data-driven drug repurposing approaches using evidence from gene expression or model organism studies, with the overlap of rapamycin and senolytics identified as top candidate drugs across these (Dönertaş et al., 2018; Ziehm et al., 2017).

For our analysis, we decided to assign an equal number of points to knowledge derived from geroscience (i.e., preclinical) and to findings from humans (i.e., clinical—both observational and interventional). Although for translational purposes, knowledge from human studies is likely to have more weight than studies in rodents, we gave both equal values for several reasons: (1) The literature on potential gerotherapeutics in rodents is quite extensive and, while many of these studies are too recent to have been considered for clinical trials yet, their potential should not be dismissed based solely on their “novelty”; (2) some mouse studies, like the ITP, are quite robust, thus enhancing their predictive value as potential gerotherapeutics; (3) because of their highly controlled nature, studies in mice often have fewer caveats than similar studies in humans. Thus, while it could be argued that preclinical geroscience knowledge becomes less relevant if a drug has solid data on decreasing all-cause mortality in humans, we decided it was not appropriate at this time to penalize potential drugs that have strong preclinical evidence.

Geroscience-guided repurposing of FDA-approved drugs to target aging: A proposed process and prioritization