GAHHH most plant proteins are not very bioavailable AND I APPRECIATE THIS SO MUCH IT’S WHY VEGANISM AGES ME SO SLOWLY (and perhaps more than most people/vegans), but plant protein power HOLY SHIT it gets absorbed so easily, I’m sure 400 calories of this shit will age me more quickly than 2200 calories of almonds.

Interesting that Peter Attia comments on this week’s podcast that most people aren’t getting sufficient protein (<1g/kg). I understand you weigh ~100 pounds? How tall are you? If your BMI is below the healthy range that would also increase your morbidity risk…

What about evidence that protein restriction, and specifically methionine restriction, slows aging? Plant protein tends to be low in methionine, therefore plant based proteins could slow aging relative to animal protein. I’m a paying member of Attia and listen to all of his podcasts, but I suspect he’s emotionally biased when it comes to protein. 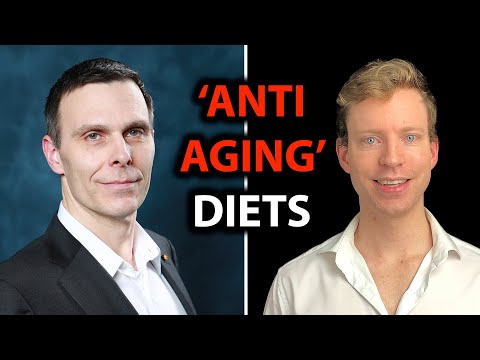 Yeah, I watched that when it was first released watched it again just now as a review. A couple of comments on Dr Kaeberlein’s comments:

The regulation of healthspan and lifespan by dietary amino acids

As a key macronutrient and source of essential macromolecules, dietary protein plays a significant role in health. For many years, protein-rich diets have been recommended as healthy due to the satiety-inducing and muscle-building effects of protein,...

Could you point me to a calorie controlled mouse study that shows increased longevity from low protein… and also highlight the value versus the 30% we see from rapamycin?

See the above review article.

Yup I read it. Which specific study do you think best supports your argument?

Here’s one for starters:

A diet deficient in the amino acid methionine has previously been shown to extend lifespan in several stocks of inbred rats. We report here that a methionine‐deficient (Meth‐R) diet also increases maximal lifespan in...

Can you check my working?:

So the extension is significantly less than for Rapamycin, must be started early in life, and is likely achieved by the same mechanism (Tor inhibition)? So I would contend that methionine restriction will not have an additive effect on longevity when used in conjunction with rapamycin.

What makes you think that a high protein diet won’t partially negate the effect of rapamycin? Or for that matter, that it’s possible rapamycin won’t even be able to fully overcome the negative effects of a high protein diet on life span? You’re also assuming that protein/methionine restriction is 100% due to mTOR inhibition, which is not the case. It’s more complicated than that.

Again, even Matt Kaeberlein said in the video above that lower protein diets are probably better for people under the age of 65.

To be clear, I’m not advocating high protein I’m just not convinced that low protein will make any difference to life/health span (especially not if you’re also taking Rapamycin). Just eat a normal healthy diet and keep your body weight in the healthy BMI range.

I think the importance of diet is grossly over valued by most. Exercise is a far more powerful tool.

You might or might not be right about the importance of diet vs exercise vs pharmaceuticals. I’m still up in the air about it myself. There are a couple of studies I need to dig up because one of them partially addresses that question.

That’s a poor study since metformin and resveratrol both failed the ITP. Additionally calorie restriction must be started early to have life extension benefits. As I’m sure you’re aware, Rapamycin can be started in middle age… and doesn’t cause frailty.

As Peter Attia said this week, moving from the lowest VO2 max quartile to the next one up is more powerful than quitting smoking for your mortality risk.

Peter attia just came out with an AMA saying that we should start consuming more protein , I don’t know if you listened to it yet or not.
It was episode 202 and he said that most of us are under-consuming protein.

I did listen to that AMA, but I’m skeptical of his claim. I mean, there may be a trade-off with high protein and longevity. You can still build muscle/strength on a 1 gram/kg protein diet if you are doing resistance training and if you’re not in a negative caloric balance. Is the problem of decreased muscle mass during aging a lack of protein or a lack of exercise? I suspect exercise itself is far more important for building strength/mass, and I’m concerned that dumping more protein into the system will potentially accelerate aging. How about replacing whey protein powder with resistant starch powder from green bananas, for instance? It’s super low glycemic and has all kinds of gastrointestinal and metabolic benefits.

Granted it’s possible that other factors (cardio training, low body fat, etc) can help to counteract the potentially negative effect of high protein, but why have any negative factors when trying to extend life span maximally? I’m not going to smoke cigarettes and think it’s ok because I eat broccoli and do cardio.

The Mediterranean diet is widely considered the most healthy yet is NOT low protein (it includes moderate intake of fish, dairy, nuts, seeds and occasional red meat).

I’d still like to know from the OP. @InquilineKea how tall are you? What’s your VO2 max? If it’s less than 60ml/kg/min stop worrying about food and get on the bike…

I don’t think that automatically disqualifies its validity with respect to rapamycin. Rather, I’d point to the fact that this study only involves the liver and says nothing about life span. Still it’s interesting that diet was more powerful than rapamycin under these (albeit limited) conditions, and we don’t (yet) have any studies directly comparing dietary manipulation vs rapamycin in vivo and in the same cohort of subjects.