How to Slow down the Ticking Clock: Age-Associated Epigenetic Alterations and Related Interventions to Extend Life Span Importantly, a number of other drugs suggested to increase life span impact epigenetic mechanisms [255]. For example, rapamycin, a prominent inhibitor of mTOR, that was shown to increase the median life span of mice by 23-26% [314], does not only cause a corresponding decrease in DNA methylation age [315] but was also reported to directly affect a number of histone marks [316]. Acting through mTOR complex 1 and 2, rapamycin treatment for instance significantly reduces p300 and histone H3 acetylation thereby regulating autophagy and lipogenesis [317,318]. These findings demonstrate that life prolonging effects of rapamycin are, at least partially, mediated via epigenetic alterations.

Metformin, another mTOR signaling inhibitor, is also reported to increase life span in various animal models [319,320]. Originally developed as anti-diabetic drug, metformin is reported to have multiple targets [321]. As one of the targets is AMP-activated kinase, which impacts epigenetics, it is speculated that metformin may impact histone modifications [322]. Indeed, metformin treatment increases histone acetylation, as well as protein acetylation [323] and alters histone marks in different cancer cell lines [324]. Moreover, metformin fosters AMPK-mediated phosphorylation and stabilization of TET2, thereby modifying 5-hydroxymethylcytosine levels and linking diabetes to cancer via an epigenetic mechanism [325]. However, in a longitudinal study employing the DNAm based epigenetic clock of Horvath et al. its effect on epigenetic aging could not be detected in human participants [251]. More work is needed to elucidate whether metformin treatment can attenuate age-associated epigenetic deregulations

Another drug family originally not intended to act on epigenetic aging are statins. Used for decades to lower cholesterol levels in patients with atherosclerotic heart disease, there is evidence that statins also lower DNA methylation through inhibition of DNMTs [326]. Statin-induced epigenetic modifications can result in enhanced expression of genes with anti-atherosclerotic actions and are also reported to prevent silencing of tumor suppressor genes in cancer [326]. The relevance of these mechanisms for the preventive effect of this drug still needs to be assessed. However, in view of these findings, statins might also be considered as epigenetic drugs to extend health span. An overview of pharmacological and environmental interventions and their impact on downstream targets is given below in Figure 4. 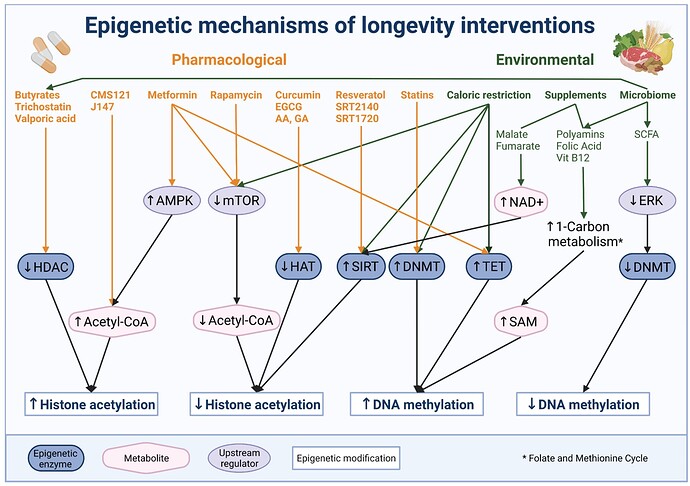 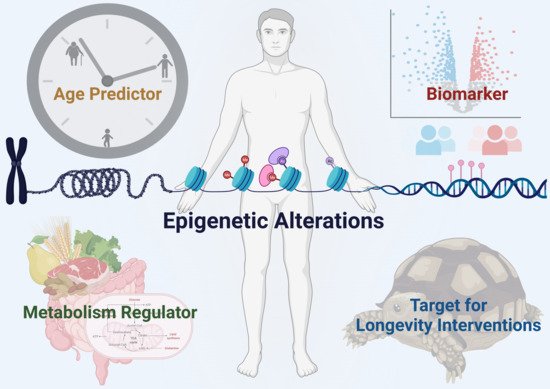 How to Slow down the Ticking Clock: Age-Associated Epigenetic Alterations and...

Epigenetic alterations pose one major hallmark of organismal aging. Here, we provide an overview on recent findings describing the epigenetic changes that arise during aging and in related maladies such as neurodegeneration and cancer. Specifically,...