So, how does this jive knowing that we all know that IPT says Fisetin doesn’t work. One of the researchers on this was Judith Campisi. All they all just lying? Exaggerating? Wishful thinking that it really works? Did a Fisetin mfr fund the study?

I believe that the most common cause of death for mice (which the ITP studies use) is cancer, not so much heart disease, as seen in humans.

For mice at least, it appears (from the ITP studies) that improving vascular endothelial function does not improve lifespan outcomes, but that doesn’t necessarily mean that it does not for humans. Sadly, mice are not the perfect model for human aging, and lifespan tests on humans take too long, and good biomarkers for aging in humans are not yet at the point where they can serve as reliable proxies.

It could be that Fisetin, by improving vascular endothelial function does improve human lifespans… its just hard to prove that.

Thank you! For this reason alone, I will side with this study and continue to use Fisetin.

While I like Dr. Brad Stanfied, he has flip-flopped on Fisetin. He has often flip-flopped (I do too)
on the supplements he takes.

Unfortunately confusing the issue is the actual validity of “scientific” medical research published.
Since fisetin supplements seem to be at least harmless, I would continue to take them if you can afford them and you feel comfortable adding still another supplement to your longevity/healthspan stack. I’m still taking a fisetin supplement because I have already bought a few months stock of it. When it runs out I will have to reconsider whether to buy more.

While I like Dr. Brad Stanfied, he has flip-flopped on Fisetin. He has often flip-flopped (I do too)
on the supplements he takes.

I see this as a strength. He follows the research and isn’t afraid to update his regimen and recommendations based on new data. IMO it’s the hallmark of a good and humble scientist.

Agree, but sure is confusing to me, especially since I curate and write about healthspan/lifespan studies.

It may also be a problem with the dog aging study. I believe that they also mainly die from cancer.
Does anything die of heart disease like humans?

Turns out mammals do have CVD disease, it just manifests differently than humans. Even in the rapamycin/mice studies, although cancer was 90%+ cause of death, CVD related pathology was found in 5% +/-.

Heart disease is common in humans and chimpanzees, but is caused by different...

Heart disease is common in both humans and chimpanzees, manifesting typically as sudden cardiac arrest or progressive heart failure. Surprisingly, although chimpanzees are our closest evolutionary relatives, the major cause of heart disease is...

“Heart disease is common in both humans and chimpanzees, manifesting typically as sudden cardiac arrest or progressive heart failure. Histopathology data of affected chimpanzee hearts from two primate centers, and analysis of literature indicate that sudden death in chimpanzees (and in gorillas and orangutans) is commonly associated with diffuse interstitial myocardial fibrosis of unknown cause. In contrast, most human heart disease results from coronary artery atherosclerosis, which occludes myocardial blood supply, causing ischemic damage. The typical myocardial infarction of humans due to coronary artery thrombosis is rare in these apes, despite their human-like coronary-risk-prone blood lipid profiles. Instead, chimpanzee ‘heart attacks’ are likely due to arrythmias triggered by myocardial fibrosis”

There’s a theory that a gene mutation when humans split off from apes is associated with the different pathologies, connected to humans animal protein consumption.

I eat mostly deer, and a little elk and Neu5gc is only expressed in beef,lamb and pork so I might be ok. O
TOH, neither deer or elk has much fat at all, so we put in tallow and sometimes bacon. The bacon may have Neu5gc because there is protein there, but wouldn’t the tallow be safe?

I’m not taking Fisetin, but to get the quantities used in the studies, I’ve seen people using some of these sources (not sure of quality): 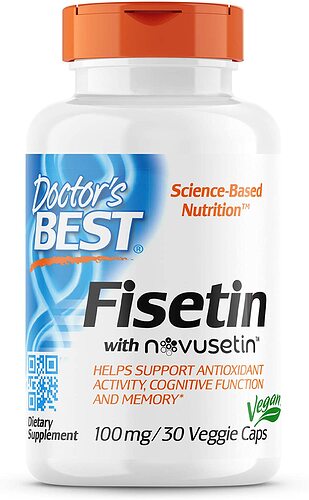 Here is a discussion on the Mayo Clinic protocol:

Can anyone tell me the actually protocol used in the landmark Mayo Study involving Human skeletal health? And what type/brand of Fisetin?

Thanks, Rapadmin. This is what I was thinking. Take a massive dose, then why take more if you’ve already killed them?
The Mayo protocol used a massive dose. It’d be 20 pills for me. Probably would be smart to take a few from LE for the galactomannan, then finish off with the cheap ones taken at the same time.
You sent just what I wanted there, thanks again,

Exactly, I believe you have it right. My own dosing is similar.

Reposting from another forum, about the ITP Fisetin results.

Following studies with mice that showed significant senolytic clearance of senescent cells following large doses of the readily available flavenoid supplement Fisetin, my wife and I (ages 79 and 84)…

"OK, I went to the Interventions Testing Program (ITP) web site looking for more information on just how they tested Fisetin. They list a large number of ITP publications, but none I could find that mention Fisetin in the title or abstract. Their “Compounds in Testing” table indicates that they tested Fisetin as a part of their 2018 Cohort on mice from age 20 month to death (mice live about 36 months). They administered 600 parts per million of Fisetin in the mouse chow in the cycle of 3 days on and 11 days off. It is not clear what mg/kg dose level corresponds to 600 parts per million (it depends on how much chow the mouse eats and how much the mouse weighs), but it sounds small. I suspect that their dosage was not over the senolytic threshold.

Addressing the issue of whether Miller is using a large enough senolytic dose, I did the following calculation:

When I do a 3-day senolytic session (like yesterday through tomorrow), I take 2,000 mg of Fisetin per day for three days. I weight about 72 kg, so my senolytic dose level is about 28 mg/kg.

My agility champion Shetland Sheepdog Taliesin is fed about 100 g of kibble per day (I weigh it), and he weight is about 12 kg. If his kibble were to contain 600 parts per million of Fisetin, then he would get about 60 mg of Fisetin, which means that his senolytic dose would be about 5.0 mg/kg. If my dog is a good analog to Miller’s mice, then Miller’s mice are getting about 18% of the dose level that I and others take for senolytics. That’s likely to be well below the senolytic threshold.

I’m not surprised that Miller’s group sees no senolytic effect."

I don’t know about this specific study you referred to, but generally what the ITP does is contact the leading labs that do research on the compounds and get their recommendations on what dose the should test to maximize their probability of success.

How is fisetin different from D+Q? 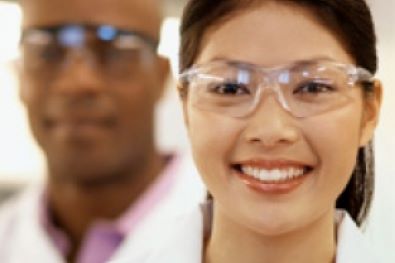 Each compound is given in the diet at the following levels (part per million -ppm- which is defined as milligrams of agent per kilogram of food). All testing is Stage I unless otherwise indicated. 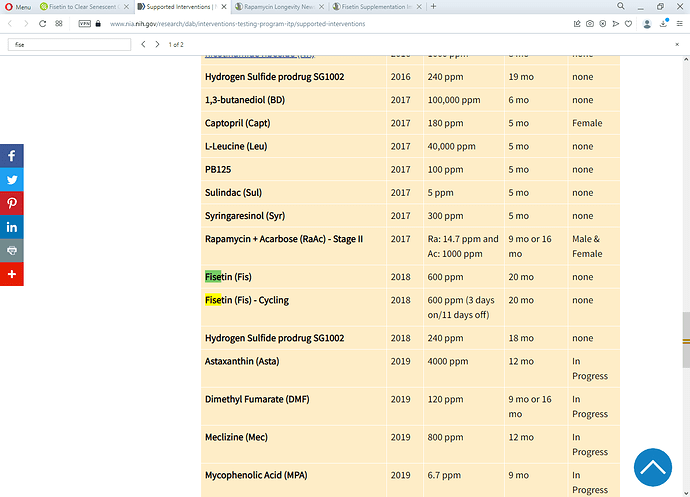 “I just watched Miller’s presentation. His mention of Fisetin was very brief and dismissive, and he did not say specifically how it was given to his test mice. It is well known from Kirkland et al that for any senolytic effects there is a threshold that must be exceeded and that too small a dose does nothing. It is not clear whether they used large burst doses for a few days or if they just added modest amounts of Fisetin to their daily mouse chow. Also, he said that they had not tried Quercetin, and he did not even mention Dasatinib, so it’s clear that did not try D+Q as a senolytic. Finally, I don’t understand why he was so dismissive of lab results done by administering the molecules in question to senescent human cell cultures. I would think that such tests are at least as indicative as tests on a distant short-lived species.”

Blockquote How is fisetin different from D+Q? 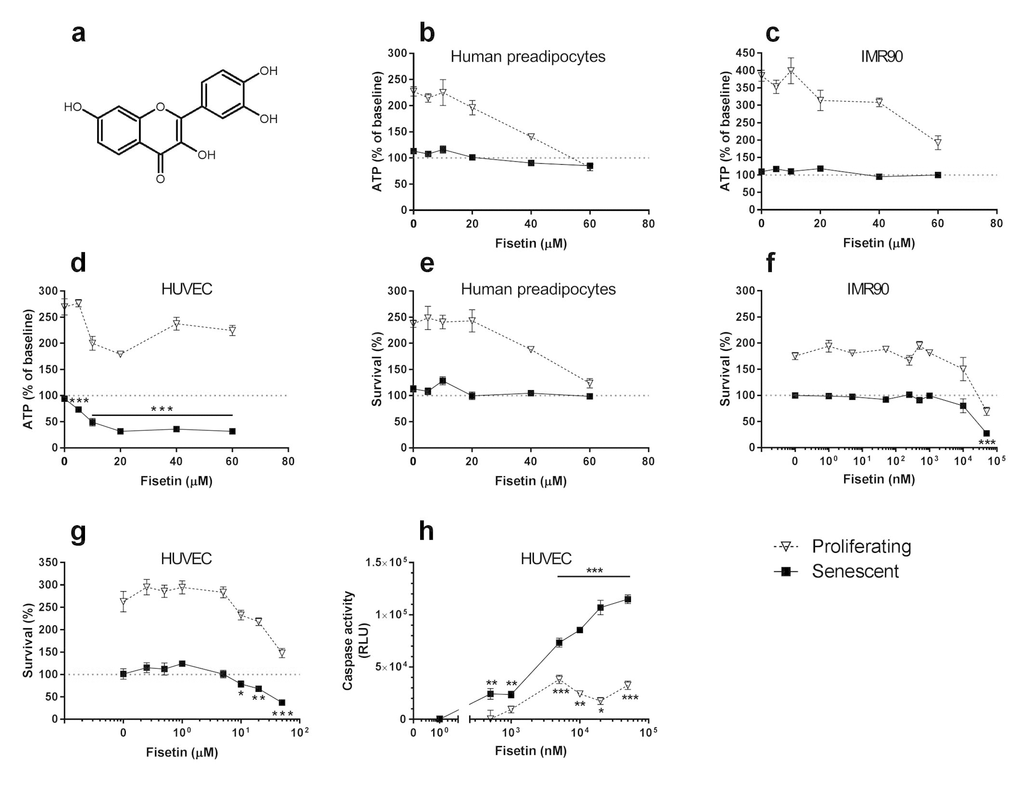 New agents that target senescent cells: the flavone, fisetin, and the BCL-XL...

I have heard that a small dose of Fisetin every other day promotes a hormetic effect which is Dr. Sinclair’s approach. For clearing senescent cells you need a high dose, say 3g, taken for 2 days straight once a month which is the Mayo clinic approach.

D+Q is the most effective senolytic. However safety is the issue. It may be too potent.