Good news for all the rapamycin autophagy fans here:

In this study, the researchers sought to investigate if targeting mTOR-independent autophagy with trehalose in addition to the mTOR-dependent pathway with rapamycin would bring additional benefit in a mouse model of Alzheimer’s disease.

Trehalose treatment significantly upregulated autophagy in the hippocampus and frontal cortex, while the combined treatment was more efficient in inducing autophagy than monotherapies in the amygdala and dentate gyrus.

This study shows that the induction of autophagy by trehalose alone or in combination with rapamycin in general is more beneficial than rapamycin-only treatment in an animal model of AD. This points out the importance of activating the mTOR-independent pathway to address neurodegeneration.

The authors argue that unlike rapamycin, which acts through mTOR, trehalose affects the expression of several transcription factors, including FOXO1 and TFEB, which, in turn, regulate the expression of autophagy genes. This leads to an increased production of lysosomes. In a new study published in Pharmacology Biochemistry and Behavior, researchers have shown that a combination of two compounds targeting different autophagy pathways is effective in fighting […]

Research paper the above story is based on:

Combined induction of mTOR-dependent and mTOR-independent pathways of...

Alzheimer's disease (AD) is associated with amyloid-β (Aβ) accumulation that might be hindered by autophagy. There are two ways to induce autophagy: t…

•Trehalose but not rapamycin produced pronounced and prolonged autophagy induction.

More on Trehalose and Autophagy

Its interesting, because trehalose is easily available as a sugar substitute (similar, I think to Allulose, which many will have heard of from Peter Attia). I use Allulose in my house as my sweetener typically, though still use very little.

Trehalose might be something we need to research more:

Trehalose has been widely used in the preservation of food, but has also been used to treat medical diseases due to its ability to enhance autophagy. In healthy middle-aged and older adults, oral trehalose supplements (100 g/day) improved microvascular function by increasing endothelial nitric oxide [21]. The protective effects of trehalose have largely been demonstrated in neurodegenerative disorders, including Alzheimer’s disease, Parkinson’s disease, and Huntington’s disease [22,23,24]. Trehalose enhanced autophagy and reduced abnormal protein aggregation in the brain tissue of mice with Huntington’s disease [24,25].

… the efficacy of orally administered trehalose has been well-documented in neurodegenerative disorders. Trehalose (2%) added to the drinking water was directly bound and inhibited polyglutamine aggregates in a mouse model of Huntington’s disease, and the presence of trehalose in the homogenates of brain and liver tissue has been confirmed, indicating the effectiveness of orally administered trehalose [25]. The long-term administration of 1% trehalose through drinking water over two and a half months reverted the death of dopamine neurons and induced autophagy in a mouse model of parkinsonism [39]. In a mouse model of Lewy body disease, the oral intake of 2% trehalose for one week was associated with increased autophagy in the brain [40].

Source: Effect of Trehalose Supplementation on Autophagy and Cystogenesis in a Mouse Model of Polycystic Kidney Disease

Autophagy is required for neurulation, and autophagy activators with minimal toxicity, such as the natural compound trehalose, a nonreducing disaccharide, possess high therapeutic value. To determine whether trehalose directly induces autophagy,...

Trehalose: an intriguing disaccharide with potential for medical application...

Trehalose is a naturally occurring disaccharide comprised of two molecules of glucose. The sugar is widespread in many species of plants and animals, where its function appears to be to protect cells against desiccation, but is not found in mammals.... 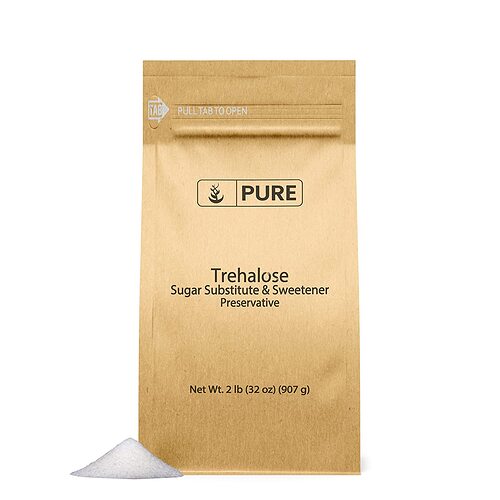 *These statements have not been evaluated by the Food and Drug Administration. This product is not intended to diagnose, treat, cure, or prevent any disease.

That’s interesting. I wonder if allulose works the same . Coffee also upregulates autophagy, so some coffee sweetened with allulose and rapamycin down the hatch. I can feel my cells self digesting just thinking about it.

We hypothesized that supplementation with trehalose, a disaccharide that reverses arterial aging in mice, would improve vascular function in middle-aged and older (MA/O) men and women. Thirty-two healthy adults aged 50-77 years consumed 100 g/day of...

Would like to read the full study. Most likely a transgenic AD mouse model, which has been an abject failure translating to human AD clinical trials. Consuming a sugar…that’s like kryptonite for me, anti-thesis of all things to avoid for dementia related disorders.

From Twitter, but i think he means 300 grams per day. 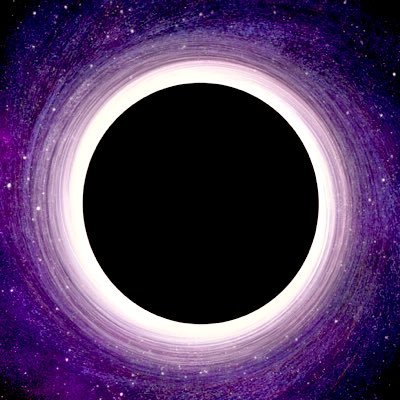 @jacobmhands
@RapaNews Would recommend speaking to Tom Larocca, but to be clear the actual dose of trehalose that would be indicated is something in the range of 200-300 mg per day which is obscene. Amazing compound but mg/kg makes it a little complicated
MAC June 2, 2022, 2:46pm #7

300g/day? Diabetes anyone? I am extremely leery of any sugar/saccharide.

Although it shows some lower glycemic index response (25g bolus) than glucose. 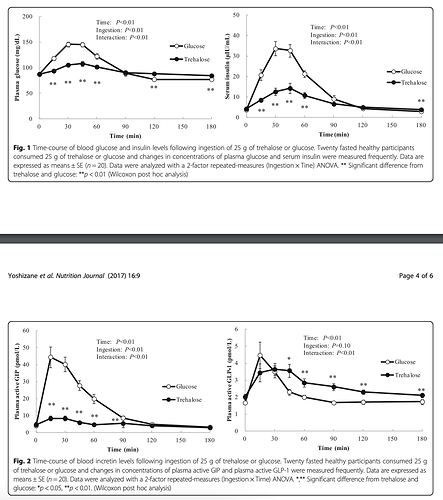 “Therefore consuming trehalose with daily meals
may contribute to the maintenance of good health
through the prevention of hyperglycemia. Also trehalose
may possibly contribute with useful saccharide in prediabetic and type 2 diabetic patients”

Also, it may reverse arterial aging in mice. That would be a major game-changer if it translates to humans.

Since I have been taking rapamycin my fasting glucose keeps creeping up.
I currently use stevia as a sweetener. Now I think I will try trehalose for a while and monitor the results.

If you’re glucose is creeping up due solely to Rapamycin, and not consuming other sugars or diet mediated glucogenic nutrients, adding more glycemic index will just increase your glucose further.

Another molecule/molecules to add, just doing quick surfing will be adding D-Ribose and Modified Citrus Pectin to the Trehalose.

Yes, I am aware there is a marketed product with that mix. Will be mixing my own from bulk.

Maybe, but it doesn’t spike like sugar and I have just recently added Empagliflozin to my regimen. As I have posted before, at my age, I am willing to experiment until I see which way my markers are heading. Thanks to the relatively cheap self-purchased blood tests available I can get much more frequent testing. I feel empowered by it and I don’t have to argue with my doctor or fight with my insurance company. I am not sure younger people realize what exciting times these are.

If you’re replacing sugar WITH Trehalose, then yes, maybe you reduce glucose. But if nothing has changed in your diet to cause a rise in glucose, then you’re just adding to it.

But run the experiment…I can see the motivation.

I thought you said nothing excited you at 81…you are fighting harder than most of us!

Although it shows some lower glycemic index response (25g bolus) than glucose.

I will put my cgm on when i try trehalose. If i am taking empagliflizin i suspect minimal impact.

OK - I ordered 2lbs of Trehalose from Amazon (the link in the first post). Maybe I’ll try Trehalose sweetened lemonade?

Does anyone have any other ideas on how to consume 100 grams to 300 grams of trehalose in a day? This seems to be an issue with this compound…

I’m going to test it out over the coming month… with my CGM on (and using a finger prick blood sugar test also) to see how it impacts my blood glucose levels - by itself, then with either Acarbose or empagliflozin.

Also - something to be aware of…

Clostridium difficile disease has recently increased to become a dominant nosocomial pathogen in North America and Europe, although little is known about what has driven this emergence. Here we show that two epidemic ribotypes (RT027 and RT078) have...

There are other risk factors: 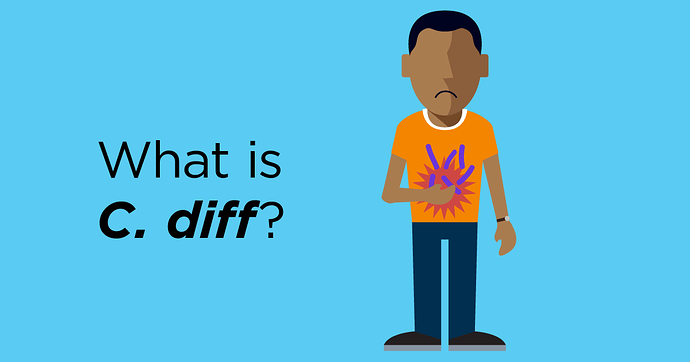 Could you or your loved one have C. diff?

Learn what to ask your doctor about this life-threatening infection.

will be adding D-Ribose and Modified Citrus Pectin to the Trehalose.

@Joseph , why D-Ribose and Citrus Pectin?

While surfing looking up Trehalose information{based on your original posting here] I came across a company/popular book published doctor D’Adamo marketing Trehalose with the additional D-Ribose and Modified Citrus Pectin.

Mitochondria are important organelles referred to as cellular powerhouses for their unique properties of cellular energy production. With many pathologic conditions and aging, mitochondrial function declines, and there is a reduction in the...

In this minireview, we examine the ability of modified citrus pectin (MCP), a complex water soluble indigestible polysaccharide obtained from the peel and pulp of citrus fruits and modified by means of high pH and temperature treatment, to affect... 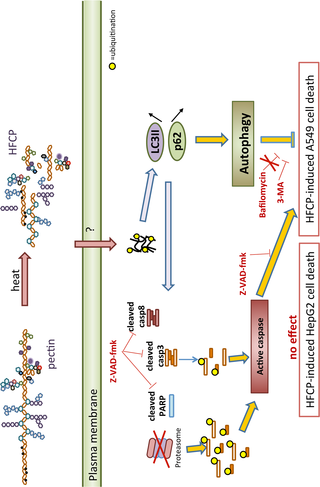 Cancer is still one of the leading causes of death worldwide, and finding new treatments remains a major challenge. Previous studies showed that modified forms of pectin, a complex polysaccharide present in the primary plant cell wall, possess...

They have discovered that once in the bloodstream, this modified citrus pectin, known as MCP, may help combat cancer and rid the body of certain toxic substances.

So I just copied the molecules that are being marketed in his Trehalose product. Will be mixing from bulk, this cost less and you can change the mix.

Thanks for the reminder re MCP. Took it years ago for its anti- metastatic properties and just fell out of the habit. The studies are very impressive for a whole range of cancers. I had no side effects but it’s pricey.

“I had no side effects but it’s pricey.”

The lowest price I located is at the All Star Health, web site;
Paid $78.00 for 1 lb, NOW branded selling the PectaSol-C, Modified Citrus Pectin{MCP]

I have no affiliation with ASH, NOW or the PectaSol-C manufacturer/producer, am just a customer.

Good to know. Thanks.

I am excited to try D-ribose. It’s something I have come across before from Youtube fitness gurus etc, but have never actually tried it. While I generally feel good, at my age I can always use a little more energy. 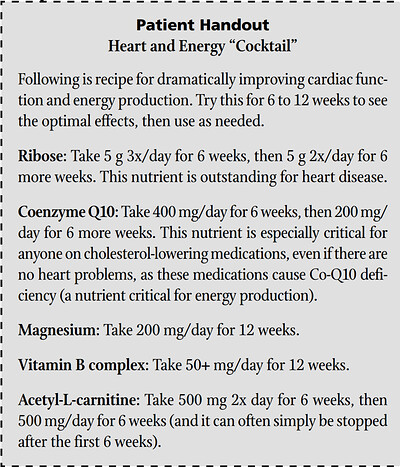 As an added benefit it appears t be synergetic with coffee for extending the temporary boost you get from coffee and modulating the jittery effects of coffee.

D-ribose – An additive with caffeine

“D-ribose with caffeine may be the substrate to aid in the potential intracellular energy demand, aid in lessening the perceived unpleasant side effects of caffeine, and still preserving the desired benefits of this stimulant consumed by all of us daily.”

D-ribose – An additive with caffeine

Caffeine acts as a stimulant, in which approximately 90% of people in the United States consume daily. Besides its beneficial effects, many individual…