Balancing on One Leg, Good Test for Your Longevity

Skip the lipids and see if you can stand on one leg for 10 seconds. I love simple and inexpensive tests like this

People who are middle-aged or older and can’t balance on one leg for 10 seconds are more likely to die in the next seven years than those who can do it, according to a study out this week.

What did the study investigate?

People aged between 51 and 75 were asked to stand on one leg for 10 seconds, with one foot touching the calf of the other leg – a bit like a flamingo. Those who couldn’t do this had a higher rate of dying during the next seven years than those who completed it: 17.5 per cent versus 4.6 per cent. The study involved about 1700 people based in Brazil, most of whom were white. 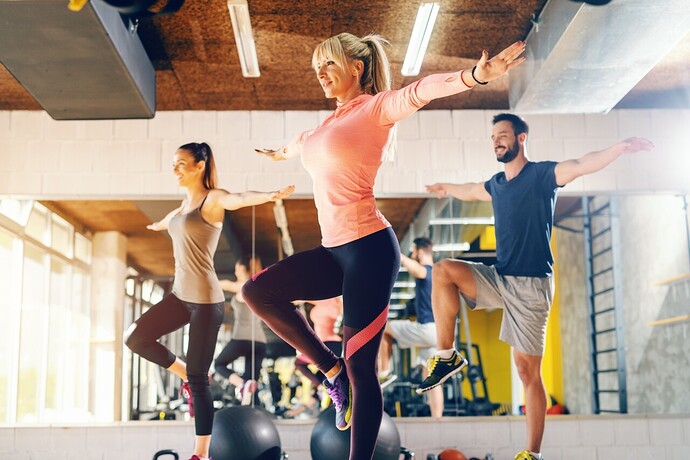 Can you balance on one leg? Study shows increased risk of death in 7 years if...

It’s called ‘The Flamingo Challenge’. Researchers have found that if you can’t balance on one leg for more than 10 consecutive seconds, you have an increased risk of death i…

One of my almost daily exercises is to stand on one leg (for each leg). From that experience, I think there are perhaps two aspects to balance. One of the aspects is what google is telling me is called vestibular sense. The other part, mho, is just strength. It does no good to know that your body is out of wack wrt balance if you don’t have the strength to hold it up.

I wouldn’t be too surprised if lack of strength is part of what causes the association between lack of balance and mortality. OTOH, there is apparently some evidence that sarcopenia might be related to nerves flaking out, which could also affect vestibular sense.

That’s smart. Us men tend to think more about strength than balance I’m afraid. I’m not sure what exactly is happening with this test but its prognostic feature is certainly impressive.
How long can you stand?

I stand on each leg, eyes shut, for the count of 70, which generally comes to between 50 secs & 1 minute. My left leg seems to be weaker, so it’s harder. Lately, I’ve been having trouble, so it sometimes takes a few tries. I hope that passes quickly, might be because I just had covid.

That’s why I think strength is important – I can feel my leg not wanting to stay straight. I also have a theory that it’s easier to maintain strength, etc, than to lose it & regain it, which is why I practice it. [I do it at home, not when I’m traveling. I could, but it’s too much bother & I’m not gone for long on any trip.]

For those who would rather not register with Medscape, I found the entire article published here: 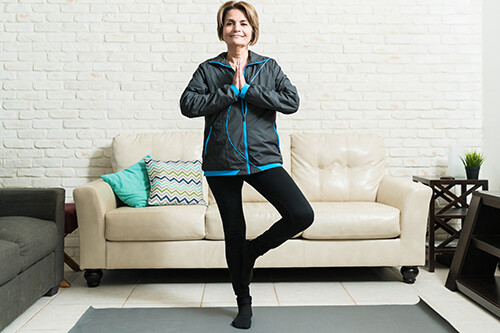 Inability to stand on one leg in mid to later life linked to higher risk of...

Balance test could be included in routine health checks for older adults, say an international team of researchers, led by the Clinimex exercise medicine clinic in Rio de Janeiro and including the Bristol Medical School.

1 minute on one leg with eyes closed? To me, that sounds extraordinary! 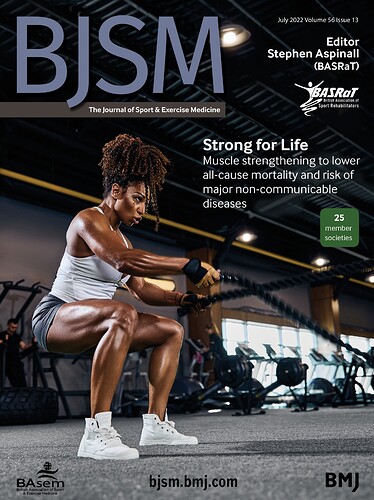 Objectives Balance quickly diminishes after the mid-50s increasing the risk for falls and other adverse health outcomes. Our aim was to assess whether the ability to complete a 10- s one-legged stance (10-second OLS) is associated with all-cause...

Intuitively, it makes so much clinical sense…combination neurological and physical, two central facets of health.

The one leg wrapped around the other though does make the test somewhat easier, but nevertheless, still sufficiently sensitive. 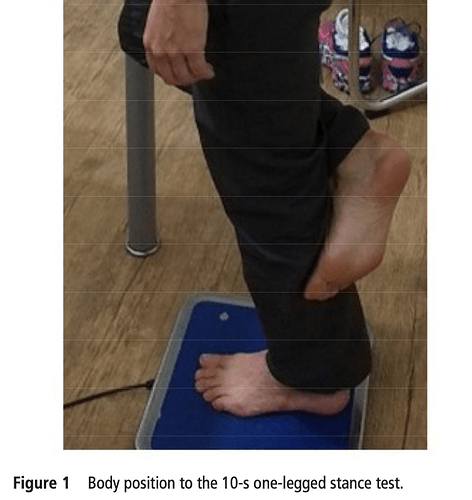 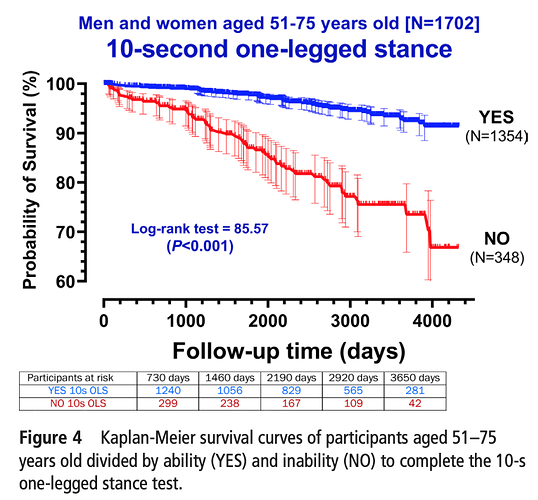 I read about something similar many years ago in a book by Roy Walford called The Anti-Aging Plan (with a focus on caloric restriction with optimal nutrition). In the book he described this standing test and why its a good measure:

“Static Balance
This is one test you can do on yourself. How long can you stand on one leg with your eyes closed without falling over? A person 20 or younger can do so more or less indefinitely; an 80-year-old person, not at all. The decline is thus very steep, as illustrated in Figure 4.2. Unfortunately, this test has never been applied in a large predictive population study, so “its ultimate value as a functional age biomarker is uncertain. However, because it involves very complex functional parameters indeed, it remains the best candidate for a biomarker you can do yourself. If you can balance for ten seconds, you are functionally 50 years old or less: twenty-five seconds, 30 years old or less.”

Try it (with eyes closed) and post your results!

With the eyes open technique I’ve worked up to 3 minutes, but with eyes closed it’s about 3 seconds. Practice helps improve muscle strength and coordination with eyes open, but I may not be able to improve the time with my eyes closed.

I can hear my paranoid friend worrying about falling over doing the exercise by losing one’s balance too quickly. My paranoid friend is able to find things to be afraid of that I would never have imagined, but she isn’t always completely wrong. In other words, do be careful.

For me, personally, this is one of my habits & has been for years. I have no idea if it’s one of the things where maintaining is better than trying to restore, but that’s my belief.

It isn’t anything like as simple as just maintaining, though, if one is (for example) obese, there could be a lot of functionality loss just from that situation, plus wrt balance itself, I imagine it would be harder to balance a larger body.

If anyone does decide to add balance exercises into their daily habits & finds that they can work up to a longer time (or not), maybe post it so we can add it to our store of n=1+ data?

FWIW, I don’t try to pick my foot up to any particular height & I do use my hands for balance. Sometimes I start to go off balance & need to move my foot to regain it. I personally am not like rock solid all the time, but I’m not trying to win any Olympic sport, but to keep myself healthy as much as possible.

18 s first try and a lot of swearing. I’ll work on it for awhile.

My wife found a plywood disk about a foot across with a hump on the bottom that I stand on while watching tv. You sort of totter around and try to keep the edge from hitting the floor. It’s closing the eyes that gets me.

53 y.o. can easily do over 1 minute.
To make it (much) harder, once balancing with eyes closed, turn the head from side to side - less than 10 seconds for me when doing that. (Having been doing the harder test for over a year I think that is why the simple one leg stand with eyes shut is easy for me).

Meh. There are too many variables. Shoes or bare feet?
Do you have ankle or knee problems?

So, I practice balancing and continue to get better. Now, am I younger? Don’t think so.

My balance time is affected by the type of shoes or lack there of.

Personally, I can balance much longer on my bare feet and on a hard surface.

The balance test may be a good indicator using a large cohort, but individually it means nothing without accounting for many variables and other age indicators. So, in my high school p.e. classes we got to try various balancing routines including a balance beam. Are students that show better balance younger than their peers? Some people have always had a better sense of balance, but that doesn’t make them younger.

So, personally, even though I can balance on one foot for much longer than my age group, doesn’t mean squat, as with practice my balance time is improving without making me any younger.

Eyes open 45 seconds on each leg. With eyes closed about 4 seconds on right leg and 2 on left leg. Need more practice.

wow, I can do a couple minutes on each with eyes open but less than 10 secs with eyes closed
wonder what the difference is
I’m easily subject to motion sickness so I think inner ear plays a role in eyes closed

So, personally, even though I can balance on one foot for much longer than my age group, doesn’t mean squat, as with practice my balance time is improving without making me any younger.

Totally agree. The only point about improving balance is it makes you much less susceptible to a fall which for older people, potentially with brittle bones, can have far reaching negative consequences.