Astaxanthin: A Potential Treatment in Diseases and with Aging

“The subjects in the astaxanthin group were instructed to take one 20 mg astaxanthin capsule (Marine Product Tech. Inc., Seongnam, South Korea) once daily after breakfast for 12 weeks.”

All subjects in the two intervention groups completed the study. According to the count of remaining capsules, adherence rates were 93.4 and 92.9% in the astaxanthin

In the astaxanthin group, gastrointestinal adverse events were observed: fecal color changed to red (n=2, 14.3%) and bowel movements increased (n=2, 14.3%). Changes in fecal color to red could have been due to the reddish color of astaxanthin. In the placebo group, muscle fatigue (n=2, 15.4%) and abdominal discomfort (n=1, 7.69%) were observed. Subjective symptom improvement after astaxanthin intervention included decreased fatigue (n=4, 28.6%), body weight loss (n=3, 21.4%), and improved skin condition (n=2, 14.3%). There were no abnormal changes in the results of renal and hepatic function tests during the study period.

One particularly interesting finding is the possibility that astaxanthin prevents body weight gain. The changes in BMI and body weight in the two intervention groups support this hypothesis. Body weight and BMI hardly changed in the astaxanthin group, whereas they both increased in the placebo group (Table 1). A previous animal study also showed that astaxanthin inhibited increases in body and adipose tissue weights in obese mice fed a high-fat diet [11]. These findings may be meaningful for overweight or obese individuals. However, there was not a significant difference in our study; thus, more studies are needed to evaluate whether astaxanthin truly has a body weight-lowering effect. 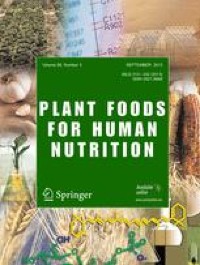 Positive Effects of Astaxanthin on Lipid Profiles and Oxidative Stress in...

Astaxanthin, a carotenoid, has antioxidant activity as well as many positive effects, such as anticancer and anti-inflammatory effects. We performed a randomized, double-blind, placebo-controlled study to investigate the effects of astaxanthin on...

The folks supposedly providing the Astaxanthin for the ITP, also ran a large clinical trial years ago.

Underwhelming, even at a very high dose (24mg) being discussed by here forum members? 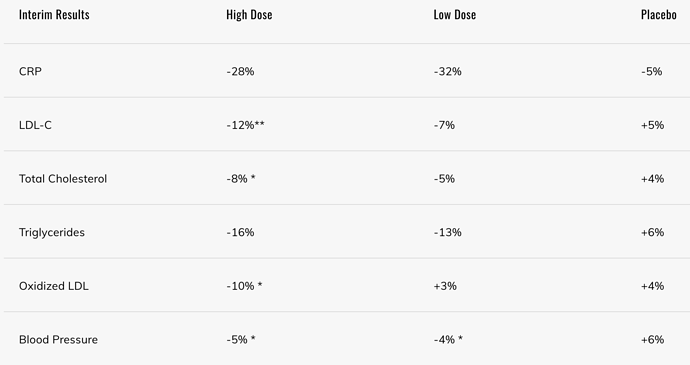 Underwhelming, even at a very high dose (24mg) being discussed by here forum members?

Yes - underwhelming… but in the ITP study they were dosing at 4000ppm for the mice… which “seems” to translate to 3 grams/day in humans… be interesting to see truly high dose results in a human study.

Fantastic, just what the doctor ordered.

Very good numbers. Is it an astaxanthin effect?

I am posting here mainly because I don’t want to start another thread.
This is some good news

Well, maybe we can take “liver health” supplements off of our stack. Just do your liver no harm.

Speaking of salmon and Astaxanthin, I only eat wild salmon.

It’s in season now (fresh vs frozen). Look at this incredible natural Astaxanthin color. Now I just need to eat 13 more of these half fish filets today to reach the 7 salmons/day equivalent Astaxanthin ppm of the ITP study. 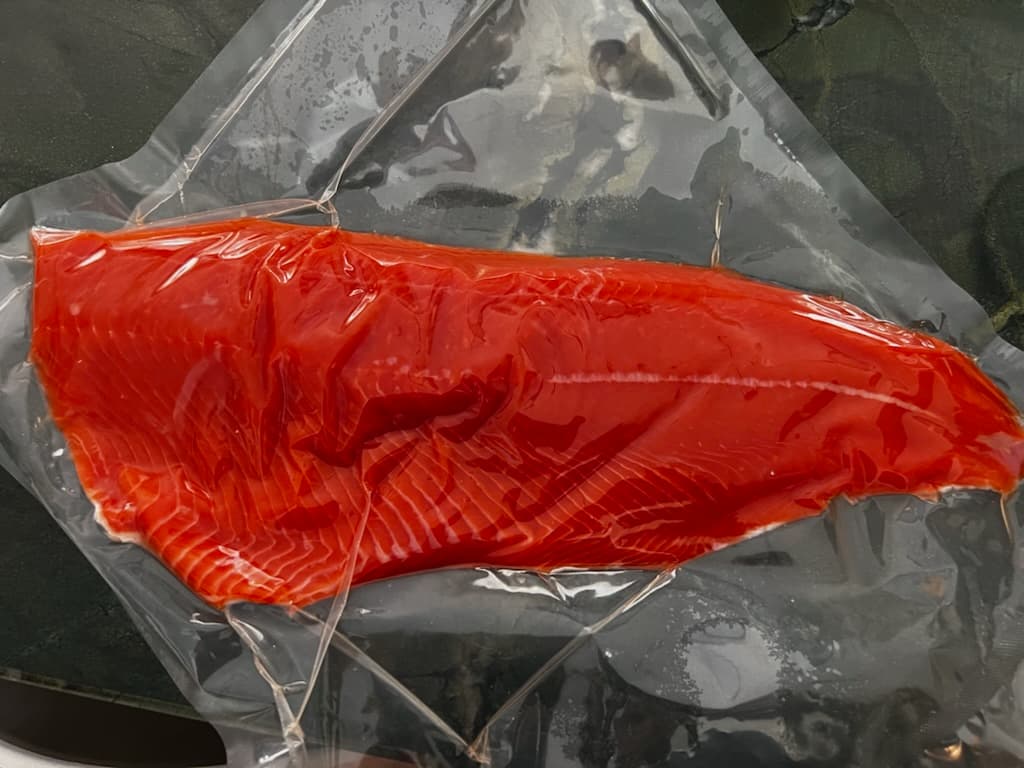 I only eat wild salmon.

Its interesting, I tend towards the wild salmon but didn’t have a good rationale for that choice before I listened to a podcast with Rhonda Patrick on the Huberman interview. She mentioned that the food they feed the salmon in the “farm pens” is very different from the normal diet (thus the need to post process the salmon later to get the pink color again) so have different nutrient values than the wild salmon. So yes, if you don’t mind paying the difference - it might be worth it: 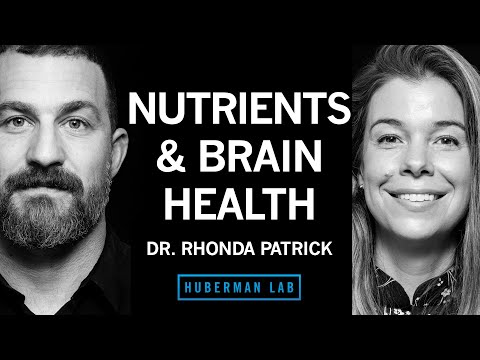 Man stuffs all kind of junk in farmed fish. I try not to eat anything touched by man, only whole foods.

Sous vide 125F for 45 mins with simple olive oil dressing. Beats frozen and canned! Oven or pan or grill dries this fish out and damages many of the good nutrients. No AGE either. 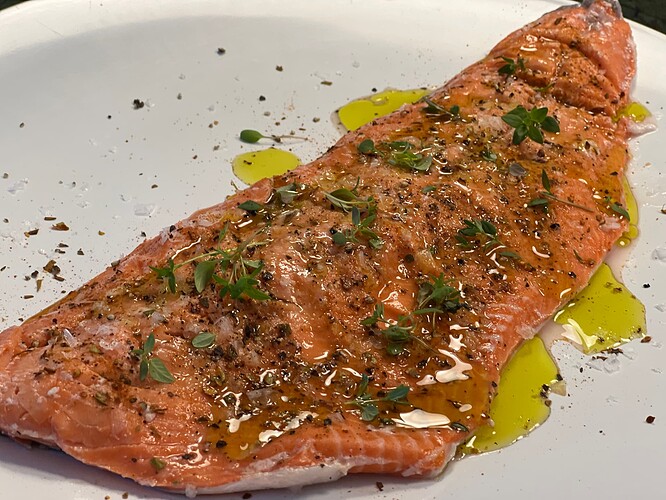 You are making me hungry!

Always wondered if cooking in plastic really is a good idea???
I’d just poach it to avoid the drying out.

I use foodsaver bags. Made from polyethylene glycol and nylon, and don’t contain BPA, phthalates, or other plasticizers with EA-leaching additives. 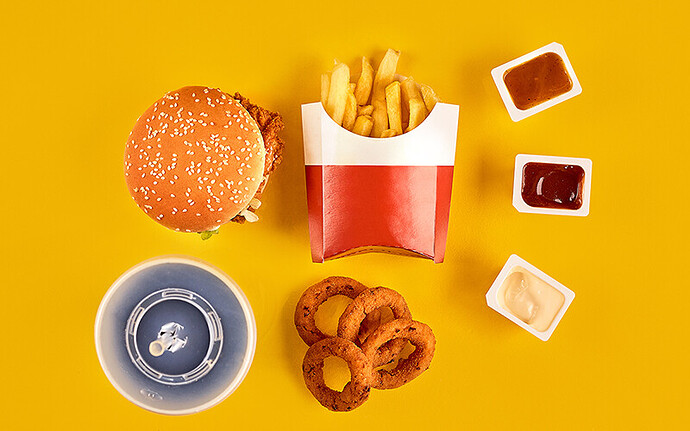 Toxic PFAS, the “Everywhere Chemicals,” Are in Organic Pasta Sauce and...

Wow, considering how 25 mg wipes me out I don’t see how that dose could ever be achieved! Were the mice able to stay awake??

why does astaxanthin help? A possible mechanism. Astaxanthin is a carotenoid. In Mikes video he shows a neat correlation between Albumin and beta carotene - a carotenoid. In the Morgan Levine calculator for bio age Albumin is an important factor 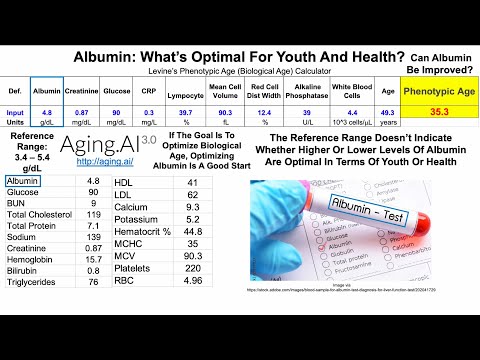 I remember asking Mike a while back what he thought the mechanism was for carotenoids and increased albumin and he didn’t know.
Any ideas?

Here’s an idea re albumin/protein sequestration, and perhaps glycation inhibition, or otherwise misfolded by other reactive species in blood.

Astaxanthin /æstəˈzænθɪn/ is a keto-carotenoid with various uses including dietary supplement and food dye. It belongs to a larger class of chemical compounds known as terpenes (as a tetraterpenoid). Astaxanthin is classified as a xanthophyll (originally derived from a word meaning "yellow leaves" since yellow plant leaf pigments were the first recognized of the xanthophyll family of carotenoids), but currently employed to describe carotenoid compounds that have oxygen-containing components Ast...

“In shellfish, astaxanthin is almost exclusively concentrated in the shells, with only low amounts in the flesh itself, and most of it only becomes visible during cooking as the pigment separates from the denatured proteins that otherwise bind it.”

The binding with proteins aka albumin?