I’ve been taking 5-6mg Rapa every 7-9 days for 4-5 months now, and also have a good number of actinic keratoses (grew up in Florida - lots of sun).

In the last couple of years, I had done a combo topical treatment of flourouracil and calcitriol to treat the AKs on my arms, with pretty good results. It was a week or so of 2x per day application, some redness and peeling for a few weeks after that, and an improvement in appearance and reduction in the number of AKs.

I just completed a similar treatment on one of my legs, and man was there a reaction. My immune system really revved up - leg was super red, with some papules/vesicles and edema in the leg below the knee (treatment area was calf) after about a week. The edema lasted for another week, and the redness and peeling for another week after that. I was a little worried about the edema, but my dermo said it was nothing to worry about.

My leg is still peeling just a little, and my whole body still seems hyper-sensitive to itch - like my immune system was amped into overdrive. It seems to be waning though. The good news is that I think once the AK scars completely heal, my calf will literally be AK-free, which is pretty awesome as it was pretty gnarly. I’m speculating that being on Rapa generated a stronger immune response, and perhaps will even speed the healing. Thoughts?

It’s probably impossible to know if rapa had anything to do with it, especially given the high variability of inflammatory response with 5-FU. It’s possible your calf just had more actinic damage than your forearms, for instance. I’ve seen some pretty significant redness/scaling/scabbing on lower legs in my patients, whereas forearms are usually pretty mellow by comparison. The face is where people really hate to use it (but it works SO well in the long run if they can hang in there!).

David
Have you tried the all natural product Curaderm. Works as well as 5- FU in my opinion and not as red.

A cream formulation containing high concentrations (10%) of a standard mixture of solasodine glycosides (BEC) has been shown to be effective in the treatment of malignant and benign human skin tumours. We now report that a preparation (Curaderm)...

As I have previously posted. I have what my doctor described as chronic actinic keratosis due to extreme sunlight exposure when I was young. This has caused me to visit dermatologists and undergo various nasty treatments 2 to 4 times a year. I have been taking rapamycin for ~ 6 months and my actinic keratoses have completely cleared up. I haven’t been to a dermatologist in a year. I am convinced that rapamycin is a cure for actinic keratosis. Incidentally, my first dose seemed to stop the keratoses in their tracks and further doses have completely cleared them up.

No sir, I haven’t tried Curaderm but it sounds interesting. Have you ever by chance tried it on anyone with disseminated superficial actinic porokeratoses (DSAP)? DSAP is notoriously difficult to treat, and I haven’t had very good luck with 5-FU.

I hope rapa isn’t a cure for AKs, or I might be out of a job!

No I haven’t but its got me thinking. Often, as you know, we get best results from combination chemotherapy. Maybe curaderm + 5- FU. Or as an alternative, one of them could be combined with a rapamycin cream or ointment using 3 mg of rapamycin in 4.5 oz of skin cream.

It would certainly be interesting to see if compounded rapamycin cream affects AKs, and it should be safe; however, as a PA I have to be careful how far off-label I go with things.

The reduction, let alone the complete reduction of actinic keratoses to zero, was a complete surprise. It wasn’t anything I was looking for or expected when I started taking rapamycin.
Just for fun, I am including a couple of photos taken after a “Blue Light” therapy at my dermatologist. “Blue Light” therapy sucks, not because it’s not effective, but because it confines you to your home, lest you scare the hell out of the public. 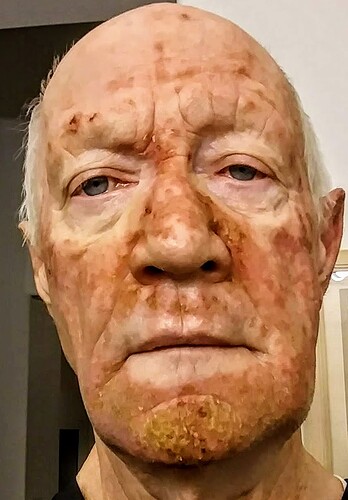 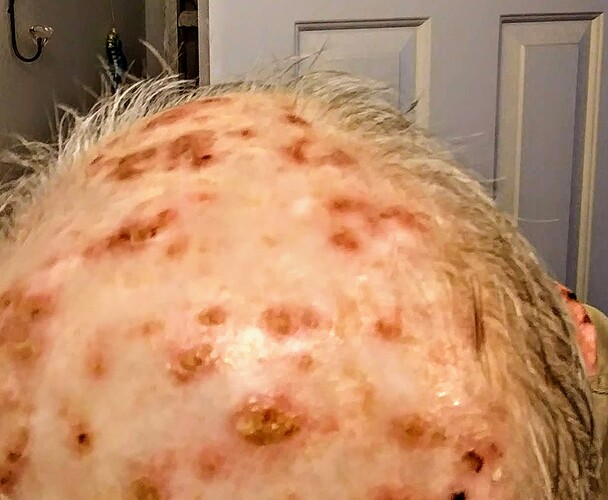 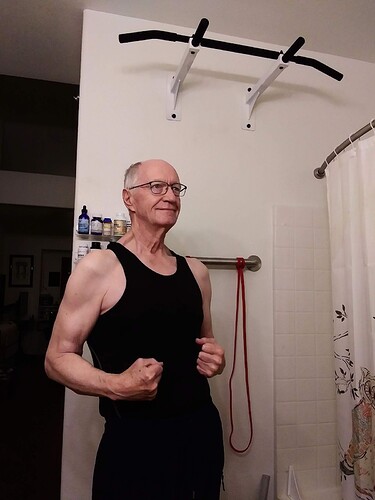 Ha! You got quite a brisk response to the ALA-PDT aka “Blue Light Special” but at least it typically heals up fairly quickly. Now imagine walking around like that for 4 weeks with 5-FU on your face! (hence why I rarely prescribe 5-FU for the face)

So what’s the best course of treatment for AKs on the face? Would a series of glycolic or lactic acid peels eventually reduce/eliminate the appearance of the AKs, or do they require topicals like 5-FU, etc. (assuming that one would need a field treatment approach vs. cryotherapy)

If I needed field treatment for AKs on my face, I’d probably do anywhere between 1 and 3 treatments of ALA-PDT during winter months (separated by about a month each), or alternatively I might take some time off work and try a short 5 day combo of 5-FU and calcipotriene cream, which may work better than 5-FU by itself. I think of peels as having a more superficial/temporary effect and AFAIK they aren’t covered by insurance unless perhaps one has an excuse not to use standard methods of treatment. Again, that’s just what I’d do personally, not medical advice😬