When should the first blood test be taken after starting Rapamycin

I started on 3 mg Rapamycin in July 2022, with a 2 week break to get a COVID vax and take a course of Dasatinib.

So that means I’ve been taking it for 10 weeks.

When should the first blood test be taken after starting? I was going to do it at 12 weeks, but someone on here mentioned it may take 20 weeks to ‘normalize’ and I don’t want to be confused by any false positives in terms of lipids/blood sugar.

I’d love to hear your feedback

I think most of us here do every 4 to 6 months. There is no “right” answer, backed up by research. 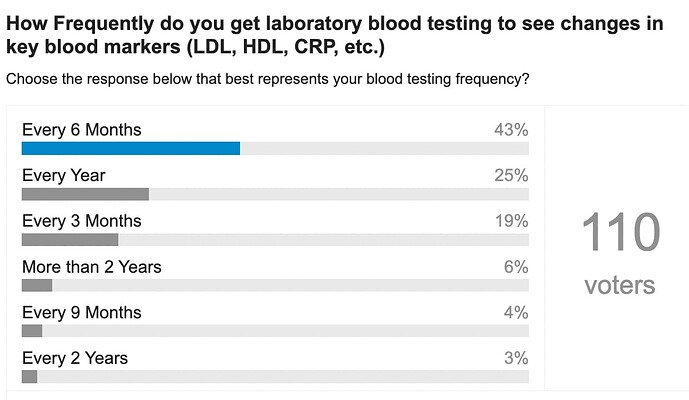 IMO: There are so many variables to consider.
How often does your insurance company pay for tests?
How interested in the month-to-month results are you?
Can you afford to pay for additional tests yourself? etc, etc.

I am old and retired and can afford to take a few additional tests above and beyond what my insurance will pay for just to satisfy my own curiosity.

I follow Michael Lustgarten on Youtube. He is fanatical about qualifying his food selection and intake to see whether or not he is heading in the right direction as far as anti-aging markers are concerned. He does many of his tests bi-monthly.

I do it ~ about four times a year just to satisfy my own curiosity.

Personally, I would say once or twice a year. I don’t remember at what age my insurance started paying for twice-a-year labs and checkups, but at a certain age, they do.

I can afford to pay for extra tests, that’s not an issue.

Bi-monthly sounds a bit extreme. I think I’ll settle for 4 months in initially. My Rapa supply will run out after that anyway.

Obviously my option of weekly tests is quite rare.

a) When doing a blood test you are measuring static variables in a dynamic equilibrium.

b) Tests have errors (which means there is an argument for multiple tests in order to get more precision).

c) The time taken from a change in inputs to a change in outputs varies. Looking particularly at white Blood cells it appears to me that the impact of Rapamycin is seen at the greatest level around 10 days after taking it. However, I only have one set of data looking at this at the moment (although I do intend having another go later, but I am going to leave that for a bit).

What I do is quite complicated as I vary the elements of my protocol around the timing of blood tests. I had one on Weds last where one of the things I was recording was how quickly the venipuncture healed (it healed within about 12 hours, but there remains some bilirubin which needs to clear) . I was running one set of inputs. I have now changed the inputs and will be looking at the same issue at my blood test on Monday.