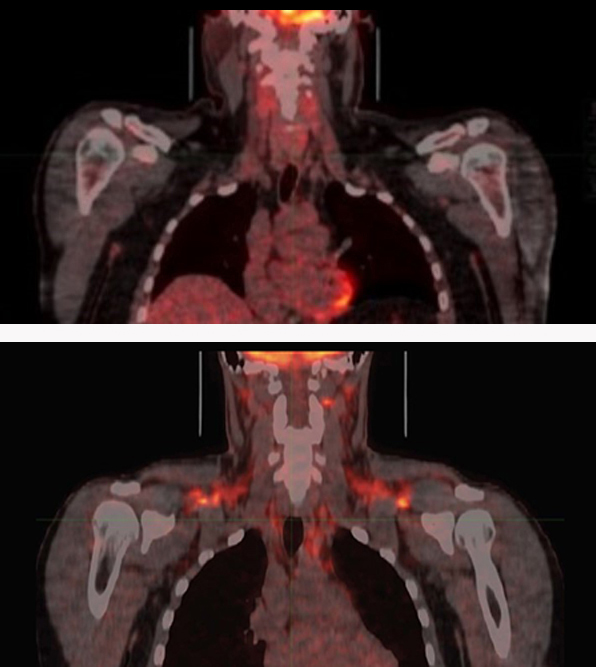 fwiw my basal metabolic rate is like 1150 calories/day, but I never gain weight even if I eat twice that amount so I always wonder where the excess energy is going

Brown adipose tissue is present in varying amounts in all adults. Its absolute weight varies from 30 to 250 grams per individual. If one considers its potential metabolic activity, it could burn up to 3 to 5 kg of fat in a year if constantly stimulated. To find out whether those with more brown fat are thinner, a study was carried out on 2934 adults. It was shown that women, thinner people, and those with a lower glycemic index all had more brown fat. In other words, it was demonstrated that the relative amount of brown fat was correlated with thinness and with lower glycemic index.

In laboratory experiments, it has been demonstrated that brown fat is not metabolically active at a constant temperature of 25ºC. P.E.T. scan shows that lowering the temperature by just 6ºC (to 19ºC) leads to a net activation of the adipocytes of brown adipose tissue. This activation coincides with the production of heat. Our body is able to record and interpret environmental conditions through two distinct systems. One is the nervous system, which receives signals through neurotransmitter receptors. The other is the endocrine system, the role of signal messenger is played by hormones. One of the most striking discoveries regarding brown adipose tissue is that it is able, when subjected to low temperatures, to produce hormones. These hormones enter the bloodstream and have the ability to transform white adipose tissue into brown adipose tissue. This extremely important process of converting energy reserves into a thermogenic organ is known as the thermogenic browning effect. When laboratory rats are treated with brown fat hormones, the conversion and activation of brown adipose tissue occurs, with subsequent calorie consumption and production and dispersion of heat. 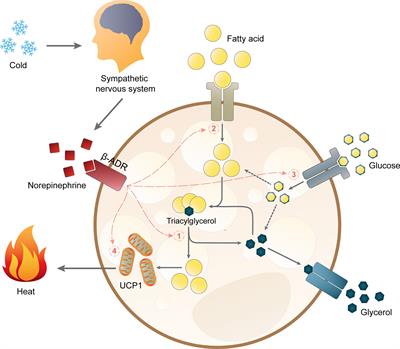 Excessive fat accumulation in the body causes overweight and obesity. To date, research has confirmed that there are two types of adipose tissue with opposing functions: lipid-storing white adipose tissue (WAT) and lipid-burning brown adipose tissue...

Women have more brown fat… AND they have lower resting metabolic rate (also aren’t their body temperatures cooler too?). Also “it isn’t active at 77F”? But it is at 66.2F (and this is presumably in normally clothed people)

THE CRITICAL INSIGHT (you don’t need cryotherapy): [from Body temperature is a more important modulator of lifespan than metabolic rate in two small mammals | Nature Metabolism ]

(or you could dress more lightly in the 60s)

Despite technological shortcomings, we do know that BAT is present in humans, and can significantly contribute to their metabolism. For example, spending several hours a day over a 10-day period at 15 °C has been shown to dramatically increase the glucose infusion rate (GIR) during a euglycemic clamp study of patients with type 2 diabetes (Hanssen et al. 2015).

ALSO it’s a good way to stay alert w/o stims. You don’t even need cold showers.

Recently, radiological 3D mapping of possibly metabolically active adipose tissues has suggested a much greater metabolic potential for BAT (61). Using measures of total BAT volume from the later study (ranging from 510 to 2358 ml) (61) with the data on BAT oxidative metabolism per gram of tissue measured by U Din et al. (143) [0.007 ml.g−1.min−1 at room temperature and 0.012 ml.g−1.min−1 during cold exposure), and assuming energy expenditure of 4.801 kcal per liter of oxygen consumed (201) and an adipose tissue density of 0.925 g.ml−1 (202), BAT contribution to thermogenesis could range from 27–123 kcal per day at room temperature to 46–211 kcal per day during mild cold exposure (Figure 8). Accurate determination of oxidative metabolism over total body BAT volume will be critical to quantify the true potential of BAT in energy expenditure in humans.

there seems to be a graded South-to-North incremental prevalence of spontaneously active BAT. For example, the reported prevalence in Boston (latitude: 42°21′30″ North) is 4% (54) whereas it is 6.8% in Sherbrooke (latitude: 45°24′30″ North) (60). As it has been discussed above, cold acclimation leads to clear increase in BAT thermogenic activity and capacity in humans (73) and, therefore, cold exposure is an important driver of this South-to-North incremental prevalence of metabolically active BAT. Whether ethnic background differences may explain changes in BAT metabolic activity is more controversial. For example, direct comparison between subjects of South Asian vs. Europid descent showed either no change in BAT 18FDG uptake (250), or reduced BAT 18FDG volume (but not activity) (170). In the latter study, all participants were Dutch (therefore living at the same latitude) and participants from South Asian descent also displayed lower resting energy expenditure and lower cold-induced non-shivering thermogenesis

THE NORTH IS BETTER 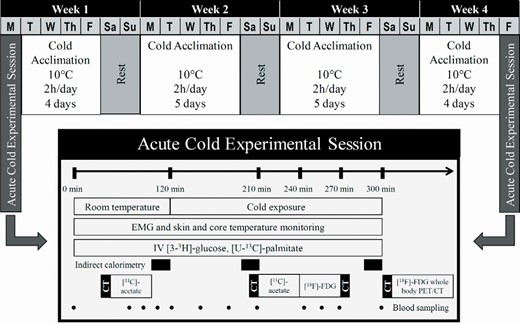 First, the small percentage of BAT-positive individuals is likely a consequence of the thermoneutral conditions of the measurement. Indeed, lower outdoor temperatures the day of the measurement are associated with a higher probability of BAT detection (Cypess et al., 2009; Gerngroβ et al., 2017; Ouellet et al., 2011). Current evidence suggests that BAT is detected in most, if not all, individuals after cold exposure (Blondin et al., 2015c; Leitner et al., 2017). Thus, the standard protocol for BAT determination now includes acute cold exposure, either to a fixed temperature (usually between 16 and 19 °C) or to a personalized cooling protocol that does not induce shivering (Chen et al., 2016). Secondly, each BAT-containing depot has inactive brown and beige/brite cells that may potentially become active (“brownable”) (Leitner et al., 2017). If the active and brownable tissues are considered, total BAT volume was estimated to range between 510 and 2358 ml, i.e. 459–2122 g assuming a density of 0.90 g/ml (Leitner et al., 2017). But activating brownable cells may be difficult. Indeed, brownable tissue remained inactive even after 5 h of cold exposure at a personalized lowest tolerable non-shivering temperature (~21 °C on average) (Leitner et al., 2017). While long-term cold exposure may be needed to fully activate brown and beige/brite adipocytes, administering longer cold exposure in humans may not be clinically feasible. 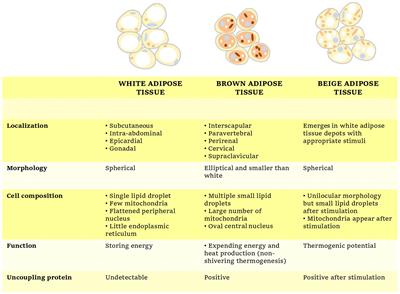 Food Ingredients Involved in White-to-Brown Adipose Tissue Conversion and in...

Obesity is the consequence of chronic positive energy balance and considered a leading risk factor for cardiovascular and metabolic diseases. Due to its epidemic trends among children and adults, there is an increasing interest in implementing new...

@AlexKChen There are so many interesting studies about non-shivering thermogenesis and BAT out there. I tried cold exposure years ago, but admittedly I just felt so uncomfortable I quit somewhere along the way each time.

But have you seen this research? I had not. And in fact (unwantedly

) given the major energy crisis in Europe I’ve been exposing myself quite a lot to temperatures of about 16C. Hoping at least I would be increasing BAT - but now I’m wondering. What to make out of this?

Rapamycin extends life span in mice, yet paradoxically causes lipid dysregulation and glucose intolerance through mechanisms that remain incompletely understood. Whole-body energy balance can be influenced by beige/brite adipocytes, which are inducible by cold and other stimuli via β-adrenergic signaling in white adipose depots. Induction of beige adipocytes is considered a promising strategy to combat obesity because of their ability to metabolize glucose and lipids, dissipating the resulting energy as heat through uncoupling protein 1. Here, we report that rapamycin blocks the ability of β-adrenergic signaling to induce beige adipocytes and expression of thermogenic genes in white adipose depots. Rapamycin enhanced transcriptional negative feedback on the β3-adrenergic receptor. However, thermogenic gene expression remained impaired even when the receptor was bypassed with a cell-permeable cAMP analog, revealing the existence of a second inhibitory mechanism. Accordingly, rapamycin-treated mice are cold intolerant, failing to maintain body temperature and weight when shifted to 4°C. Adipocyte-specific deletion of the mTORC1 subunit Raptor recapitulated the block in β-adrenergic signaling. Our findings demonstrate a positive role for mTORC1 in the recruitment of beige adipocytes and suggest that inhibition of β-adrenergic signaling by rapamycin may contribute to its physiological effects.

Rapamycin extends life span in mice, yet paradoxically causes lipid dysregulation and glucose intolerance through mechanisms that remain incompletely understood. Whole-body energy balance can be influenced by beige/brite adipocytes, which are...

Miglitol is an oral anti-diabetic drug that acts by inhibiting carbohydrate absorption in the small intestine. Recent studies have shown that miglitol reduces obesity in humans and rodents. However, its mechanisms have remained unclear. The purpose...