Some N=1 data about 2mg of Rapamycin

I have been running a large number of N=1 tests basically to develop my own protocol for improving the health of my cells. I have made quite a bit of progress with this and on Sunday for the first time I took 2mg of Rapamycin and have been asked to post here my experiences. For much of this year, but not when I went on holiday I have been doing weekly blood work. Hence I have some results from 31st August 2022 and 7th September 2022.

I am male, aged 62 and weigh around 85kg being 1.88m tall. I am in the UK so my units are likely to be different to those people use in the USA. I run quite a complex protocol which I have run in various guises over the past few years. I weighed about 130kg in August 2020, but had reduced my weight to 85kg in May 2021.

My plan with Rapamycin if I take it again is to take it every 4 weeks. That is because the half life is 3 days and I wish to have it completely out of my system for a good period of time.

My view as to the circadian cycle is that autophagy and mitophagy is best planned for the night and reconstruction during the day.

My current eating cycle is to have breakfast about 8am and have lunch about 12-1pm and then not to eat anything particularly until the next day. Hence I was looking for Rapamycin to increase the overnight autophagy.

Rheostatic Balance of Circadian Rhythm and Autophagy in Metabolism and Disease

Circadian rhythms are physical, behavioral and environmental cycles that respond primarily to light and dark, with a period of time of approximately 24 h. The most essential physiological functions of mammals are manifested in circadian rhythm...

I took my Rapamycin at 6.40am on Sunday morning (BST).

That night I had difficulty getting to sleep (which is not normally the situation) which was symptomatic of a reduction in endogenous melatonin. This difficulty reduced over the next two days. It was initially similar to the effect of a cyclooxygenase-1 inhibitor such as Aspririn. However, the effects of Aspirin tend to last about 36 hours. Hence it was clearly a different effect.

I assume that was the interplay between a high level of autophagy and the circadian cycle as indicated in that paper. My sleep on the Wednesday night had got back to something similar to the night before I took Rapamycin.

As a result of my broader protocol I have been having a certain amount of hair regrowth (and various other cellular changes). Hence I cannot tell whether Rapamycin has affected this or not. The process continues gradually.

Looking at the blood biomarkers comparing 31/8 to 7/9

MCV at 94 from 97 is an improvement. However, I have been working on this as I did get into a bit of a mess with an MCV of 101.5 earlier this year. I don’t think Rapamycin affected this.

White Cell count was something I was particularly interested in. It went from 3 to 3.5. A week I would think is too short a period to really measure this over, but I could conclude that it didn’t do any harm as yet. Lymphocytes went from 24% to 27%. Beyond saying there is no harm (which is good if that is the case) I am not sure there is a solid trend. I will find out in the future.

Creatinine went down from 90 umol/L to 76. This is a particularly hard value to get reliable results for as blood metabolises before being tested and hence the value is affected by how long it takes before the sample is tested. I have had a lower value this year, however.

If Kidney function is improved by getting a reduction in full or partial senescence as a result of Rapamycin improving differentiation through improved acetylation of the histone then I would expect to see a gradual improvement here. However, I got a 66 and a 68 in July so I don’t see too much here.

Bilirubin went up from 7 to 9 umol/L. I don’t think that was Rapamycin.

CK dropped substantially from 138 IU/L to 88 IU/L. That may mean something as a consequence of Rapamycin and I would be interested in any ideas.

Iron dropped from 20 umol/L to 10 umol/L. I wonder if this was a testing error.

CRP went from 0.3 mg/L (0.03 mg/dL) to 0.2 mg/L. I think that is a reporting issue as my CRP is normally below the sensitivity of the hsCRP test. I am trying to get a coherent answer from the Lab here.

Testosterone went up from 17.34 nmol/L to 21.6 nmol/L. I cannot see why Rapamycin would have affected this that much, but if it is not a testing artifact then it seems significant.

Sadly AFAIK there is no mechanism for assessing levels of autophagy and any benefits are seen in the long term. My worry about Rapamycin was any negative impact on White Cell Count. I am doing another test next week and am keeping an eye on this as it is one of my biomarkers that is a bit out of kilter.

However, from these so far I see no down side.

My guess is that none of your labs are from one dose of 2 mg rapamycin.

You’re obviously quite knowledgeable so please forgive me for stating the obvious but you can’t make any meaningful assessments based on one dose. Since you test every week (which is mind boggling) you should be able to see your “normal” pattern of blood markers over months. Take rapa weekly for a few months and then compare, Eliminates anomalies and cofounding factors.

Hi John, welcome to the forum and thanks for posting.

I believe you are in the UK, is that correct. How are you able to get the blood tests done on such a frequent basis? I’ve heard from friends in Canada that they can’t just go and get blood tests, they can only get them when they are prescribed by a doctor, typically once a year as part of their annual checkup.

There are lots of ways of getting blood tests in the UK. I prefer using a private GP for a blood draw then driving the sample to the lab, but i can visit a pharmacy and have a reasonably full spectrum test for GBP 149.

I think rapamycin probably has a long term positive effect, but any negative side effect should be visible in the short term which is where the blood test comes in.

I am doing an AFAIK unique protocol so I want to monitor it.

I believe you are in the UK, is that correct. How are you able to get the blood tests done on such a frequent basis?

In UK, if you are prepared to pay, one can get a blood test done every day of the week!!

This page explains somethings about my protocol 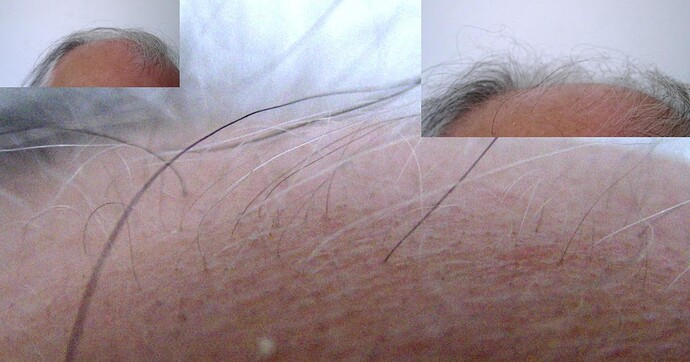 Note this photo: What you have is three images at different levels of magnification of some hair cells. These are hair cells which have ...

The only thing your link explains is that it’s a secret and that you want people to sign an NDA to learn your protocol.

Seems a bridge too far for a message board post…

I have a protocol I am testing out which appears to have some ability to ameliorate this situation. It has side effects which need to be monitored and also I would like to protect the IP. Hence I am monitoring the people who are experimenting with it (including, of course, myself) and I ask anyone else who wishes to consider it to sign both an NDA and a disclaimer.

Over time, of course, it will all become public, but not yet.

In the mean time I have a blood test from yesterday which gives HbA1c at 4.18%. That reduction (from 4.7, 4.5) may be an effect of Rapamycin. It may also be because I used a different lab.

a side comment re A1C. From the metabolic / paleo / carnivor / intermittant fasting groups; They see an increase in A1C, but the science is that intermittant fasting, ketones etc, reduces the death rate of red blood cells so they live longer thus are exposed to MORE glucose thus higher A1c when compared to the STD american diet unhealth average.

Just a thought for folks who might be disappointed with rising A1C… BUT the best tactic is to wear a CGM, continous glucos monitor. Google, theres orgs where you can buy a monthly service without a prescription. Here in the US my wife is paying $200/mo for her CGM via “levels”.

FWIW I should comment directly on some other thread;; but… I find my 2 week 10mg x 2 dose (Dr Green) helps reset my body weight lower and lower and keeping muscle on is something I have to work at. IE >90g of protein/day to fend off sarcopenia. Rapa + alternating scenolitics seems to help me keep fat off.

I have worn a CGM for a couple of sessions. That gave a good idea as to blood sugar levels, but it is not that reliable and requires calibration (this was a Dexcom). It is also a bit of a nuisance having to be aware of it. Hence I used two of the sessions and gave one to a friend.

If I could get a CGM that was less of a nuisance I would use it more.

I would not expect the MCV (Mean Corpuscular Volume - Size of Blood cells) from Rapamycin to be any more than about 5-10% less than without Rapamycin at best. (say 89 femto litres rather than 96).

My MCV didn’t change much but the MCHC did . According to labcorp this was due to a smaller cell size.

I had another blood test yesterday. I did not test as many things as I am concentrating on a limited set of markers at the moment. No really significant changes although an increase in WBC from 2.31 to 3.08. Test dates were 12/9 and 21/9. Interestingly I took Rapamycin on 4 Sep, had WBC of 3.5 on 7 Sep 2.31 on 12 Sep and 3.08 on 21 Sep. If the lifespan of WBC is in the range of 13-20 days the initial reduction in WBC numbers could be an Rapamycin IL-2 issue.

I will look for this the next time I take Rapamycin. I am, however, trying to increase my WBC numbers and fix an issue I have with MCV so I may hold back a bit further with Rapamycin (not that Rapamycin should cause the problems with MCV.)

Looking further into this the figure of 2.31 was the lowest of about 25 tests. The timing was probably right for being as a consequence of lower WBC production. In many was this is pleasing as it tends to indicate my supplier of Sirolimus was reliable.

I commend you for frequently monitoring your labs, but doubt that your small rapamycin dose of 2 mg every 4 weeks will result in any meaningful change in your biomarkers. I would suggest that you also periodically monitor your fasting insulin and testosterone levels.

You may be right, but I will see what happens next time. I may try 5mg.