Yes I can confirm that Dr. Green places a huge emphasis on Homa IR precisely because of the potential adverse effects from rapamycin. He considers fasting insulin/glucose the most important tests. He did not prescribe Metformin to me because mine was .5 or something.

He also did not view A1c as very indicative or useful.

Homa IR is useful. Fasting glucose not so much.
A1c is most useful for people on Keto or low carb diets as many of them will experience both the “morning effect” and/or higher fasting glucose while on these diets. I don’t know why doctor Green is fixated on fasting glucose. Most other doctors, including mine, don’t seem to care much about it. I had to use A1c as a reference after starting a Keto diet because it immediately raised my fasting glucose levels.

Also, fasting glucose can vary greatly with the time of day the blood is drawn and varies according to many other factors even when the diet is the same. 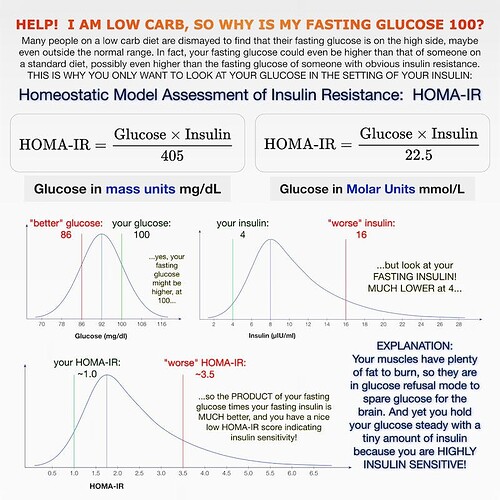 This past spring, after 18 months of great success on the keto diet, I tested my fasting blood sugar on my home glucose monitor for the first time in many months. The result shocked me. I had purchased the device, which also tests ketones, when I was...

He isn’t fixated on fasting glucose at all. He is fixated on insulin resistance because that is so damaging to the body. I spent about a long time talking to Dr. Green on this topic. In 2021 my primary wasn’t concerned by my fasting glucose of 120 because my a1c was 5.6. My primary didn’t ask for a fasting insulin test or a 2hr challenge. He said that I was okay because my a1c had not crossed the “normal” line. To say that Dr. Green disagreed with that advice would be an understatement.

He considers fasting insulin/glucose the most important tests

Maybe fixated was a poor choice word, but if he thinks the fasting glucose test is the most important then I strongly disagree.

No he doesn’t say that at all. The only way you can calculate HOMA-IR is to have a fasting glucose and fasting insulin test done at the same time. He did say it was borderline malpractice for my primary to think that I was OK based on an A1c score.

He considers fasting insulin/glucose the most important tests.

Sorry, I mis-interpreted what you said: " He considers fasting insulin/glucose the most important tests."

On the topic of his free testosterone going down, do we know if his total testosterone changed? If not, then it makes sense to me that Free T would go down due to an increase in SHBG. I’ve not seen studies on SHBG and Rapamycin use (have you?) but we know SHBG goes up with exercise and caloric restriction. Interestingly, a HIGHER SHBG I’d usually associated with a LOWER insulin level/level of insulin resistance (which obviously wasn’t the case in this person). Yes, a higher SHBG will lower Free T, but it’s actually (usually) and indicator of better health, not worse.

If Rapa has a serum half life of 60 hours, then given that two weeks is 336 hours assuming linear bioavailability with dose the serum level would be equivalent to a 2mg dose after approx 215 hours and 1mg after 275 hours. Hence it is hardly being allowed to leave the system.

I can see the argument for higher dosage, but would think that the cycling period should be extended as well.

If Rapa has a serum half life of 60 hours, then given that two weeks is 336 hours assuming linear bioavailability

The blood/sirolimus levels is really a log function early on, as shown in these curves: 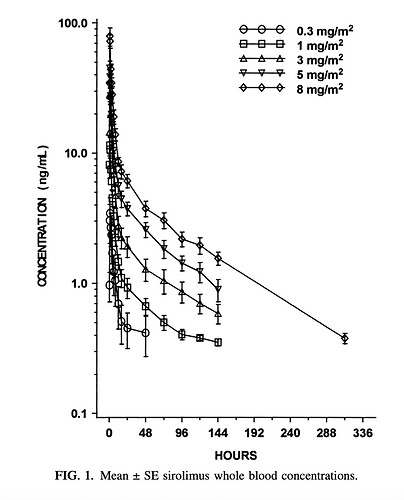 There is a question as to whether bioavailability is linear. It could be, for example, that a lower proportion of a higher dose is absorbed via the digestive system. 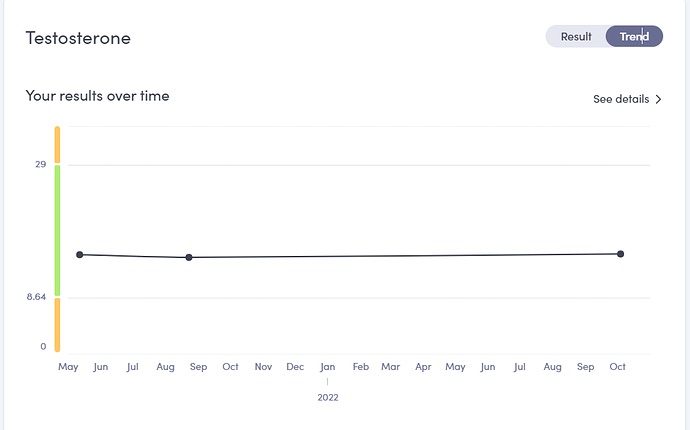 I started Rapamycin in January and my dose has ranged between 6 and 12mg/wk of Rapamune (with EVOO). As you can see it has had zero effect on my free testosterone (in fact it’s marginally higher).

On the topic of his free testosterone going down, do we know if his total testosterone changed? If not, then it makes sense to me that Free T would go down due to an increase in SHBG.

His total testosterone went down by approximately 45% after taking Sirolimus for 9 months. SHBG was not significantly changed (went from 53 nmol/L to 56 nmol/L).

A physician colleague of mine reported his recent lab test results after taking Sirolimus for 9 months, at a dosage of 12 mg every two weeks (0.2 mg/kg). Of note, there were no other changes to his medications, diet, supplements, or exercise regimen during this time period.

His labs demonstrated a significant increase in insulin resistance (HOMA-IR doubled from 0.9 to 1.9 ; fasting insulin doubled from 4 to 8). Notably his fasting glucose only went from 90 to 92, and HbA1C went from 5.2 to 5.3, showing that these two blood glucose metrics are not sensitive enough to detect early signs of insulin resistance. He also experienced a 50% reduction in his free testosterone level, dropping from 14 ng/dl to 7 ng/dl. I recall a previous forum post in which someone reported a similar significant decline in their testosterone level while on rapamycin.

Following a 60-day washout period completely off of Sirolimus, my colleague retested his labs:

Total testosterone and free testosterone levels have mostly recovered (now at ~88% of their pre-rapamycin levels).

His HOMA-IR and fasting insulin levels have returned to their normal baseline values from prior to initiating rapamycin (0.9 and 4, respectively).

Of note, his DHEA-S levels remained stable throughout: ~150 mcg/dL (no change while on or off rapamycin).

Very interesting observation. Will your colleague continue with the same dose/intervals after the lab results?

To me the argument for substantial periods between doses seems to become stronger over time. The key issue is a half life of around 60 hours or about 3 days. There is a benefit to autophagy, but the key question is how often do you need autophagy to happen.

Will your colleague continue with the same dose/intervals after the lab results?

He’s decided to reduce his Sirolimus dose to 4 mg (~ 0.065 mg/kg), with a weekly dosing interval. He will do 10 weeks on rapamycin, followed by 8 weeks off (similar to Matt Kaeberlein’s stated protocol).

This study looks at the duration of rapamycin use. Insulin resistance and insulin sensitivity varies. It is also fascinating that short term rapamycin use has detrimental metabolic effects whereas long term use improved metabolic profiles. 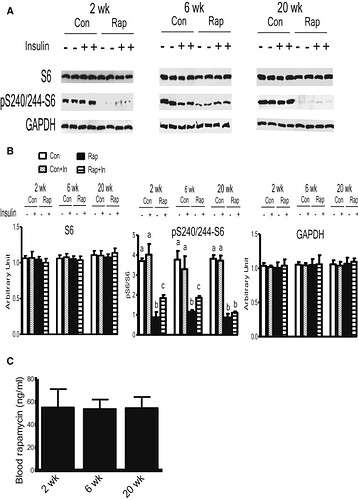 The evolutionarily conserved target of rapamycin (TOR) signaling controls growth, metabolism, and aging. In the first robust demonstration of pharmacologically-induced life extension in mammals, longevity was extended in mice treated with...

The closest and best studies that are representative of the effects in humans are probably the marmoset studies:

In this study, we found that long-term treatment of marmoset monkeys with orally-administered encapsulated rapamycin resulted in no overall effects on body weight and only a small decrease in fat mass over the first few months of treatment. Rapamycin treated subjects showed no overall changes in daily activity counts, blood lipids, or significant changes in glucose metabolism including oral glucose tolerance. Adipose tissue displayed no differences in gene expression of metabolic markers following treatment, while liver tissue exhibited suppressed G6Pase activity with increased PCK and GPI activity. Overall, the marmosets revealed only minor metabolic consequences of chronic treatment with rapamycin and this adds to the growing body of literature that suggests that chronic and/or intermittent rapamycin treatment results in improved health span and metabolic functioning.

Rapamycin has been shown to extend lifespan in rodent models, but the effects on metabolic health and function have been widely debated in both clinical and translational trials. Prior to rapamycin being used as a treatment to extend both lifespan...

I agree and the marmosets were on a ridiculous dose of 1mg per kg per day. Triglycerides always seem to go up initially , but particularly so in those already prone. No real glucose effects. No evidence of metabolic syndrome or cardiovascular disease.

Maybe someone who has been on rapamycin for more than two years or so can comment on their own lipid and insulin sensitivity history with rapamycin.

Any idea what 20 weeks of mouse lifespan equates to in humans?

(bold typeface mine)
“Here we show that detrimental effects of rapamycin treatment were only observed during the early stages of treatment. These effects were reversed or diminished in mice treated for 20 weeks, with better metabolic profiles, increased oxygen consumption and ketogenesis, and markedly enhanced insulin sensitivity. Thus, prolonged rapamycin treatment lead to beneficial metabolic alterations, consistent with life extension previously observed. Our findings provide a likely explanation of the “rapamycin paradox” and support the potential causal importance of these metabolic alterations in longevity.”

The evolutionarily conserved target of rapamycin (TOR) signaling controls growth, metabolism, and aging. In the first robust demonstration of pharmaco…