Rapamycin and Down syndrome

The Down Syndrome is “progeroid”, that is, it accelerates aging. Thus people with DS would be good subjects for clinical trials with rapamycin as an anti-aging agent, all the more because these people often already are under medical care.
As rapamycin (sirolimus) is now considered quite safe, at least at specific (pulsing) dosing, wouldn’t it be a good idea to give it to people with Down Syndrome and see how it helps them?

Accelerated epigenetic aging in newborns with Down syndrome

Accelerated aging is a hallmark of Down syndrome (DS), with adults experiencing early-onset Alzheimer’s disease and premature aging of the skin, hair, and immune and endocrine systems. Accelerated epigenetic aging has been found in the blood and brain tissue of adults with DS but when premature aging in DS begins remains unknown. We investigated whether accelerated aging in DS is already detectable in blood at birth. We assessed the association between age acceleration and DS using five epigenetic clocks in 346 newborns with DS and 567 newborns without DS using Illumina MethylationEPIC DNA methylation array data. We compared two epigenetic aging clocks (DNAmSkinBloodClock and pan-tissue DNAmAge) and three epigenetic gestational age clocks (Haftorn, Knight, and Bohlin) between DS and non-DS newborns using linear regression adjusting for observed age, sex, batch, deconvoluted blood cell proportions, and genetic ancestry. Targeted sequencing of GATA1 was performed in a subset of 184 newborns with DS to identify somatic mutations associated with transient abnormal myelopoiesis. DS was significantly associated with increased DNAmSkinBloodClock (effect estimate = 0.2442, p < 0.0001), with an epigenetic age acceleration of 244 days in newborns with DS after adjusting for potential confounding factors (95% confidence interval: 196–292 days). We also found evidence of epigenetic age acceleration associated with somatic GATA1 mutations among newborns with DS (p = 0.015). DS was not associated with epigenetic gestational age acceleration. We demonstrate that accelerated epigenetic aging in the blood of DS patients begins prenatally, with implications for the pathophysiology of immunosenescence and other aging-related traits in DS.

Newborns…wouldn’t have any ex uterus epigenetic interaction. Clearly, the dysregulated somatic mutations in and of themselves, lead to massive “epigenetic” signals in the genome.

Rapamycin should not impact these intrinsic mutations, but perhaps the proliferation of damaging, misfolded proteins and abnormal “myelopoiesis” in the DS phenotype. We already know chronic Rapamycin can impact hematopoietic stem cells. Using rapalogs, it’s likely a balancing act between competing positive/negative interactions in these accelerated aging models.

Perhaps we will learn much about mTOR inhibitors and longevity pathways in these accelerated aging models.

A recent discovery that rapamycin suppresses a pro-senescent phenotype in progeric cells not only suggests a non-toxic therapy for progeria but also implies its similarity with normal aging. For one, rapamycin is also known to suppress aging of... 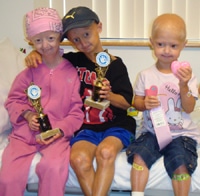 Progeria clinical drug trials are the best hope for children with Progeria, testing potential treatments that may enable them to live longer, healthier lives.

"Phase 1, to determine the safe and appropriate dosage of everolimus, began in April 2016 and was successfully completed in June 2017. Phase 2, which is testing the effectiveness of the 2-drug combination, began in July 2017. Sixty children from 27 countries have enrolled! We expect the trial visits to end within the first few months of 2022, followed by several months of data analysis and eventual publication of results in a peer-reviewed, scientific publication.

The Science Behind the Addition of this Second Drug 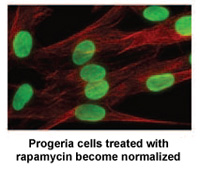 Rapamycin is an FDA-approved drug that has previously been shown to extend the lives of non-Progeria mouse models. A study* by researchers at the NIH in Bethesda, MD and Massachusetts General Hospital in Boston demonstrates that rapamycin decreases the amount of the disease-causing protein progerin by 50%, improves the abnormal nuclear shape, and extends the lifespan of Progeria cells in the laboratory.

Rapamycin is known for its anti-aging properties in mice. These findings are part of a growing list of studies that help to validate the theory that finding the cure for Progeria may also benefit the entire aging population."