While there are probably hundreds of compounds, if not thousands, that have some kind of evidence supporting the idea that they may provide some sort of anti-aging benefits, most of them have at most been tested only in lower level organisms (e.g. flies, worms, etc.), not in large, repeatable double-blind, placebo controlled studies in mammals.

Its mildly interesting to see a drug or supplement increasing the lifespan in a fly (here for example), or c.elegans worm, or even a mouse in a single study. But it starts to get a lot more interesting when the compound is a drug that is already FDA approved, has been used for years by humans, and there are well-designed, placebo controlled studies which have been duplicated in a number of different labs with similar results. And even better when the results show a relatively large increase in lifespan (e.g. 10%+), with a large number of subjects, that suggests that the results are well outside the boundaries of random chance. This is the type of information that suggests the compound is much more likely to work in humans.

There are very few anti-aging compounds that meet this high bar of validation. The following are all drugs that have been put through the National Institute on Aging’s Intervention Testing Program (ITP). This is the project that tests compounds in rigorous three-site, large sample size, placebo-controlled studies for lifespan extension in mice.

Drugs tested late in life by the ITP

So even after the impressive ITP findings, it hasn’t been pursued as an investigational new drug?

Results of the ITP study

Any insight into differential plasma levels between the males and females?

What could explain the sex-specific difference in the effect?

-How much is hematopoietic in each? 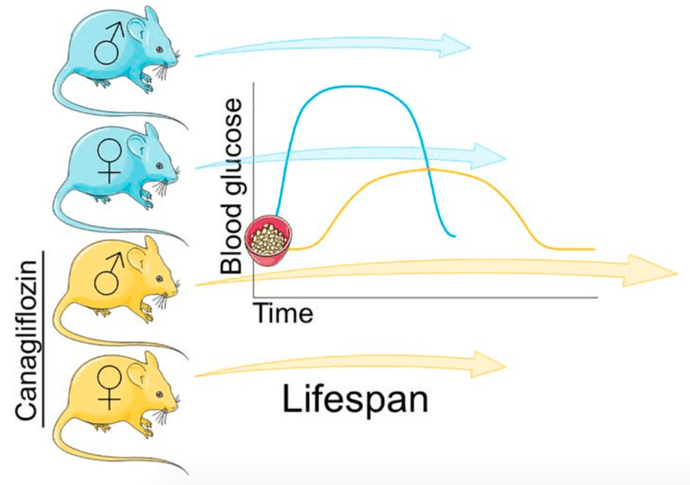 -Did you see the same effect here that you did with acarbose in that the hemoglobin A1C was unaffected?

Summarizing what we know about canagliflozin :