A new paper that covers the state of the research on different possible anti-aging drugs and supplements (or as they call them “geroprotectors”).

Rapamycin comes out on top with biggest lifespan increase, reproduced by many labs with the most number of studies (done in mice, not just flies and c.elegans/worms).

Given the large number of lifespan studies in mammals with rapamycin, even if a fantastic new compound were discovered today, it would take a decade or more to become anywhere nearly as well-proven as rapamycin in terms of its anti-aging effect. Rapamycin will be the king of anti-aging drugs for a long time, it seems.

…quercetin and rapamycin appear to have the most consistent effects on lifespan at similar dosages, making them solid candidates for geroprotectors.

Resveratrol has more studies total, but many are in worms (c.elegans) and it had a poor average result in terms of lifespan increase (i.e. none) and Vitamin E has good effects in worms also - but I don’t think anyone expects Vitamin E to be great in human longevity (please, if someone has different information on Vitamin E and lifespan increase, please post it below).

@mkaeberlein
@RapaNews They didn't differentiate between species in this analysis - this is everything. Almost all vit E studies are in invertebrates. Only one study included for mice I think. +15% effect but controls are short-lived, so I'm not convinced pubmed.ncbi.nlm.nih.gov/18257658/ 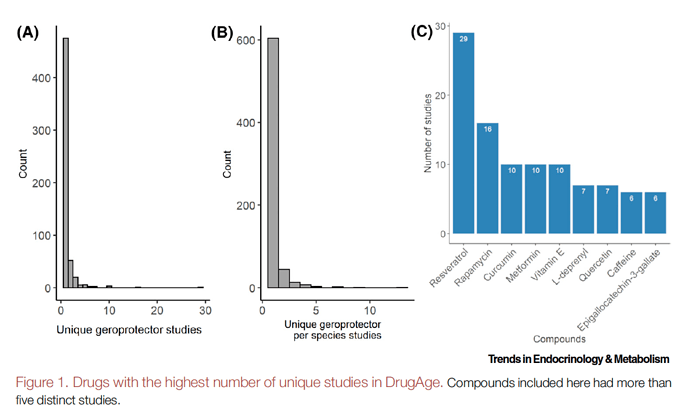 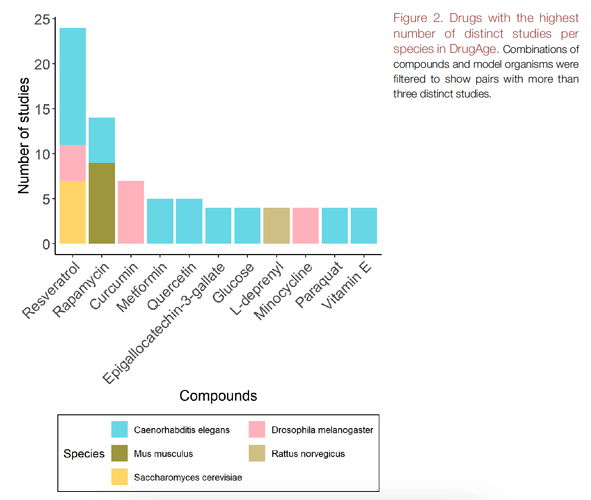 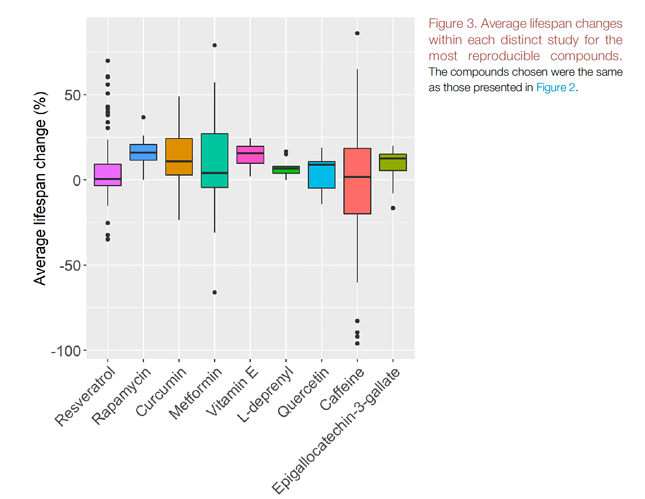 Some Other Points I Found Interesting:

The effect of most geroprotectors is relatively small because of the limited reserve of cellular repair mechanisms. For the same reason, it is not useful to combine hormetins. Examples of mitohormetins have been discussed previously. Lithium promotes longevity through GSK-3/NRF2-dependent hormesis [94]. Two other major geroprotectors, spermidine [95] and berberine [96], are also toxic at relatively high doses in mammals. Indeed, several, if not all, natural compounds such as polyphenols, isothiocyanates, terpenoids, and polyamines mediate a hormetic response in small doses by activating stress response factors such as FOXO3a, heat-shock transcription factor 1 (HSF-1), AMPK, or NRF-2. One such compound is the broccoli-derived sulforaphane, which activates the NRF2 pathway, and was able to extend the lifespan of C. elegans by 18.2%

There is a decrease in intestinal microbiota diversity with age and an increase in the proportion of
proinflammatory pathobionts [116]. Some colon bacteria produce substances with potential geroprotective properties, for example, Urolithin-A, spermidine, vitamin K2, and short-chain fatty acids (SCFAs). Vitamin K2 contributes to the retention of calcium in the bones and reduces the risk of both osteoporosis and cardiovascular disease and is thus a strong candidate geroprotector [117]. The SCFAs propionate and butyrate are produced by Clostridia and Bacteroides by fermenting plant fibers in the large intestine. They serve as energy metabolites for intestinal epithelial and brain cells. Both butyrate and dietary fiber can be considered as potential geroprotectors because they improve neuroinflammation associated with aging [118] and decrease the risk of colon cancer [119]. Similar effects have been observed for other prebiotics. Specifically, a 10% oligofructose-enriched inulin prebiotic changed the intestinal microbiota profile in mice, which led to the reversion of stress-induced immune priming and neuroinflammation [120].

Matt Kaeberlein had this to say on Twitter about this paper:

@mkaeberlein
Beautiful meta-analysis that illustrates my point here: twitter.com/mkaeberlein/st…. Resveratrol is the most commonly tested drug for lifespan, but the median effect on lifespan across all studies is essentially zero. Check out Fig 3 twitter.com/jpsenescence/s…

Our new review with @amoskalev @BKennedy_aging on compounds that slow aging is out! We discuss targeting longevity pathways pharmacologically plus report a reproducibility analysis of longevity drugs using DrugAge. https://t.co/qtfUMWpcId

@mkaeberlein
And the winner for consistently giving positive effects across lifespan studies in multiple labs and multiple species: rapamycin!

Geroprotectors slow down aging and promote healthy longevity in model animals. Although hundreds of compounds have been shown to extend the life of la…

NOTE: We just discovered that the link above is a paywall link to the paper. But - You can download the full research paper from the link the professor included in his tweet announcing the new paper (go to the page from the link below in the tweet and click on the link “view PDF”): 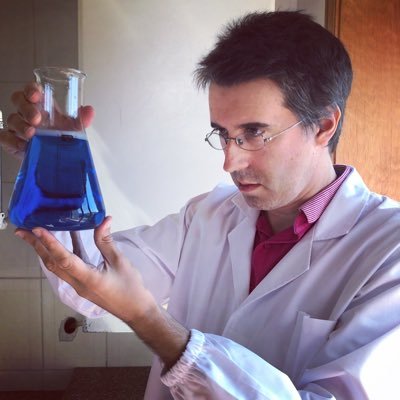 @jpsenescence
Our new review with @amoskalev @BKennedy_aging on compounds that slow aging is out! We discuss targeting longevity pathways pharmacologically plus report a reproducibility analysis of longevity drugs using DrugAge. authors.elsevier.com/a/1ebqz3jDgWiQ…
4 Likes
Davin8r February 23, 2022, 4:01am #2

Looks like a great paper! With more warnings about combinations of drugs/supplements. It’s behind a paywall for me, and sci-hub doesn’t work for 2022 papers right? 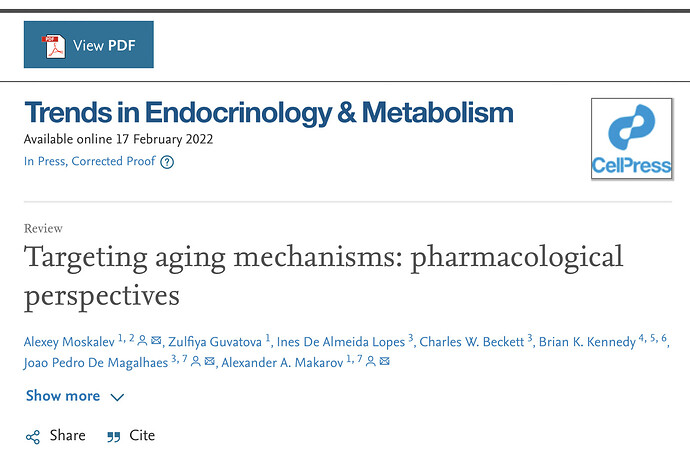 Its because of the above type of research on inulin that I added it to my smoothies I have a few times a week. I also use Moringa powder as an NRF2 activator (cheaper than sulphoraphane). How about everyone else - any of you use supplements targeting the pathways mentioned? 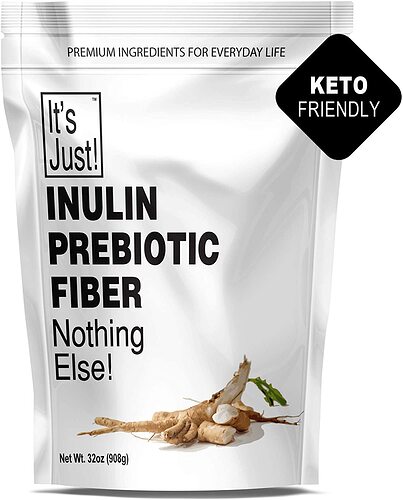 That’s how the page looks for me.

Yes - what happens when you click on the “View PDF” at the upper left corner of the page? I missed it too at first…

It’s not clickable, not a link. The only clickable links are Purchase PDF and Access Through Your Institution.

Strange - its a link on my laptop. Perhaps its an issue on phones - try it on your computer.

Nope, still have to buy it to see it. I wonder how you got VIP Access?

Ah - we figured it out. You can download the paper from the link that the professor shared - see this tweet here - and click on the “View PDF” button at the top if you want to read the full paper:

I get my NRF2 activation through moringa powder and broccoli sprouts (with mustard powder). SCFAs are increased through my consuming inulin, psyllium fiber, other fibers, and a keto diet. K2 via homemade kimchi. Supplements include lithium and vitamin E and tocotrienols. Monthly (2-3 days) potential senolytics include quercetin, fisetin, and milk thistle.

That worked, opened it and downloaded it for later reading, thanks.