Longevity Vitamins; Taurine/carnosine during meals to reduce the damaging effects of blood sugar?

It is proposed that proteins/enzymes be classified into two classes according to their essentiality for immediate survival/reproduction and their function in long-term health: that is, survival proteins versus longevity proteins.

I also propose that nutrients required for the function of longevity proteins constitute a class of vitamins that are here named “longevity vitamins.” I suggest that many such nutrients play a dual role for both survival and longevity. The evidence for classifying taurine as a conditional vitamin, and the following 10 compounds as putative longevity vitamins, is reviewed: the fungal antioxidant ergothioneine; the bacterial metabolites pyrroloquinoline quinone (PQQ) and queuine; and the plant antioxidant carotenoids lutein, zeaxanthin, lycopene, α- and β-carotene, β-cryptoxanthin, and the marine carotenoid astaxanthin. Because nutrient deficiencies are highly prevalent in the United States (and elsewhere), appropriate supplementation and/or an improved diet could reduce much of the consequent risk of chronic disease and premature aging.

I propose that an optimal level of many of the known 30 vitamins and essential minerals/elements (V/M), plus that of 11 new putative vitamins described herein, is necessary for promoting healthy aging.

I know people who also swear by R-alpha Lipoic Acid for lowering post prandial blood sugar levels. They take it an hour before the meal.

from the linked paper:

Newer evidence on the effect of vitamin D on all-cause mortality supersedes these toxicity studies, concluding that there was no increased risk even when blood levels of 25(OH)D were as high as 100 ng/mL

I had thought serum vitamin D vs. mortality was U-shaped, but apparently not. One given reference for this is:

While acknowledging some health problems from high vitamin D,

'Can’t you just get taurine, carnosine, beta alanine, etc from salmon?"
No, because I hate salmon.

There are other fish species, I only mention salmon because it’s widely available and most people don’t dislike it

As John McEnroe is fond of saying “Surely you jest!” The fact is, supplements are much cheaper and I am not really very fond of fish, except for fresh rainbow trout caught in the icy waters of Idaho streams.
As for caviar, I have tasted several kinds, and of course, only liked the very expensive kinds so I won’t be using it as a supplement

There’s a reason why the AHA recommends 2 servings of fatty fish per week but not fish oil even though it seems cheaper.

Fishing for answers: is oxidation of fish oil supplements a problem?

Also if you are the 1 in 4 APOE4 carrier - you’re literally wasting money with fish oil supplements even if you’re 100% sure you’re getting the best quality possible. Certain cold-water fish caviar (the ones not well known and not very popular) ends up being the cheapest, safest, most convenient option because the concentration of the phospholipid form is very high.

Yes - oxidation is an issue. From ConsumerLab.com 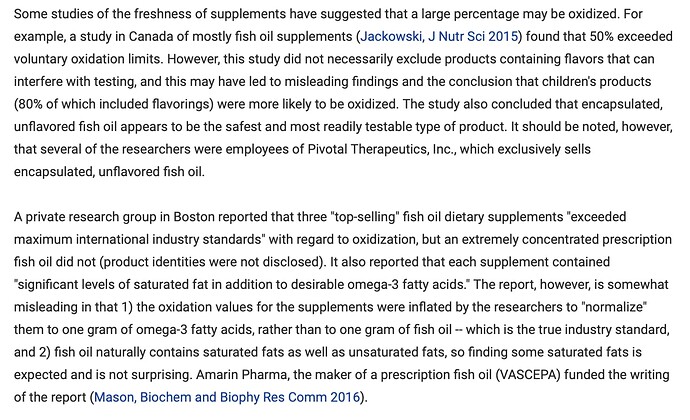 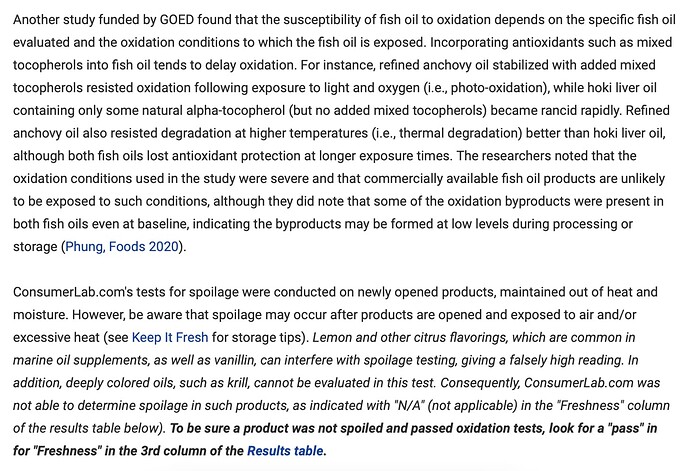 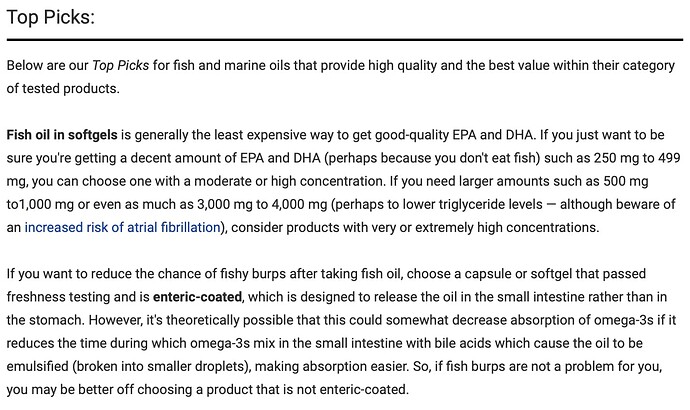 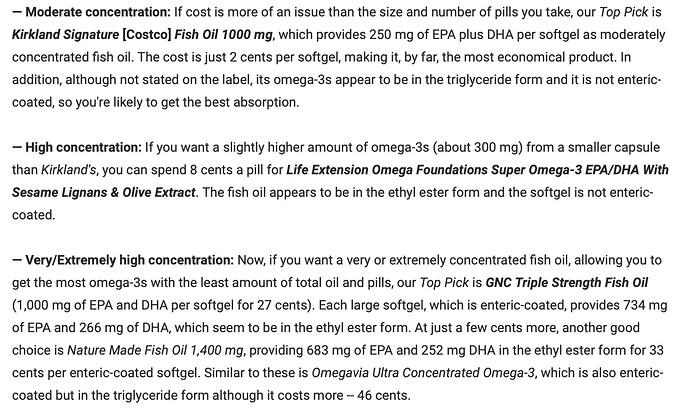 To avoid oxidation, I’ve been trying to go to the source, in the sense of likely to be fresh and free from unwanted additives: every day, I have a tablespoon of sockeye salmon oil from Vital Choice (or a portion of salmon or sardines). Based on the nutrition information on their similar capsules, I believe this provides about 2g of omega-3. 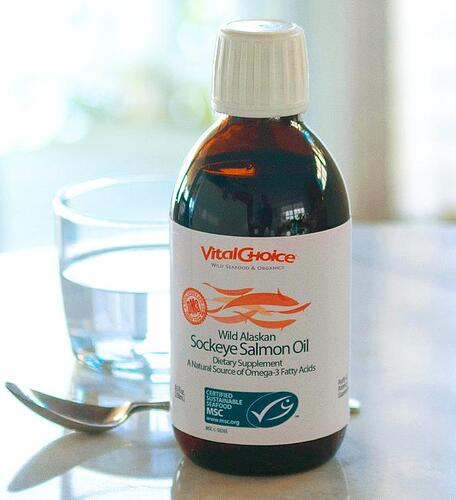 Share and enjoy our Wild Alaskan Sockeye Salmon Oil Liquid from Vital Choice - a trusted source of premium wild seafood with quality and purity you can taste.

I had thought serum vitamin D vs. mortality was U-shaped, but apparently not

The graphs from the meta study within your reference.

Do some of the individual studies within the meta (2nd graph, green, purple) suggest something about over 100 level? 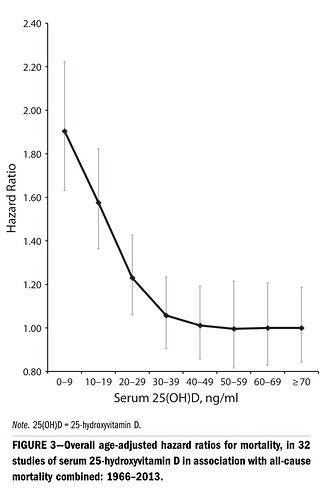 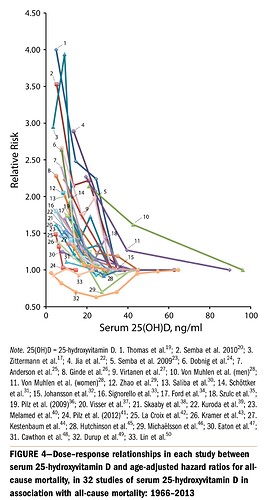 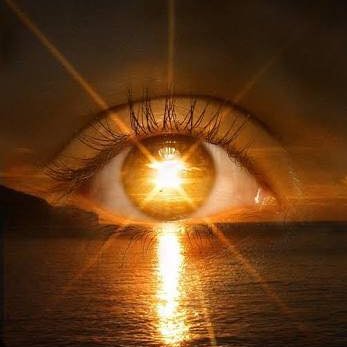 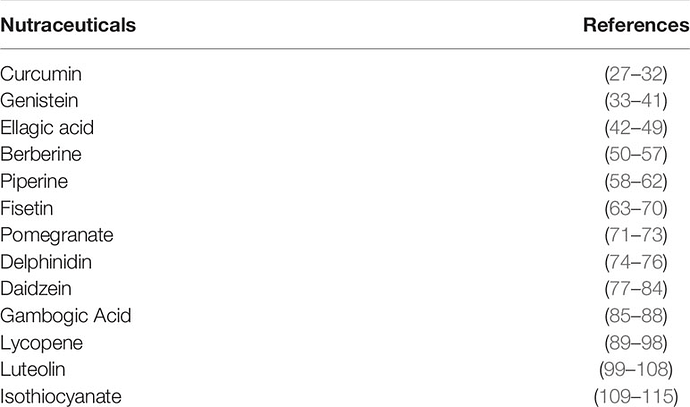 and it seems only limited value of anti-oxidant vitamins in specific use cases:

Potential harms of supplementation with high doses of antioxidants in athletes

Vigorous exercise generates large amounts of reactive oxygen species (ROS) as a result of the consumption of large volumes of O[2] in athletes, causing some athletes to consume antioxidants in the erroneous belief that this will counteract the...

I’m not convinced about vitamin D beyond say 30-40 ng/mL. Maybe 40 if you’re worried about the specific vitamin D assay quirks in testing. As I’ve mentioned before - I personally take only 1,000 IU Vitamin D3 USP grade (I have some minimal sunlight at sunrise and sunset, and some from diet, non-USP grade supplements have varying amounts - sometimes 10x the label)

Don’t forget - Vitamin D is a steroid hormone. Don’t mess with steroid hormones unless you have strong evidence because hormones are often tightly controlled for a good reason.

This is how I see it - we evolved to get vitamin D from the sun but our bodies literally evolved to produce melanin. Natural vitamin D in food is hard to come by. It doesn’t make sense why humans would evolve to make something so hard to come by extra harder to absorb beyond a certain amount if the benefit/risk ratio is high. 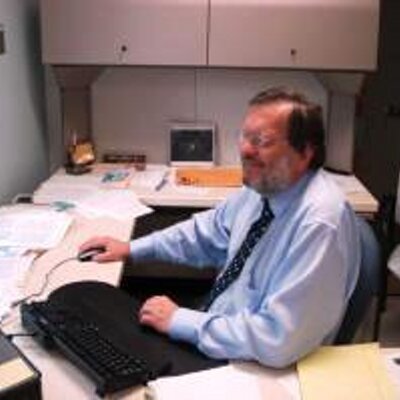 I wanted to share my omega-3 blood test results in order to show, at least for me, the effectiveness of the above salmon oil. I have been taking one tablespoon per day (1/2 T morning, 1/2 T noon), and, about twice a week, I’ll substitute a serving of sardines, salmon, or shrimp for one of those 1/2 T. 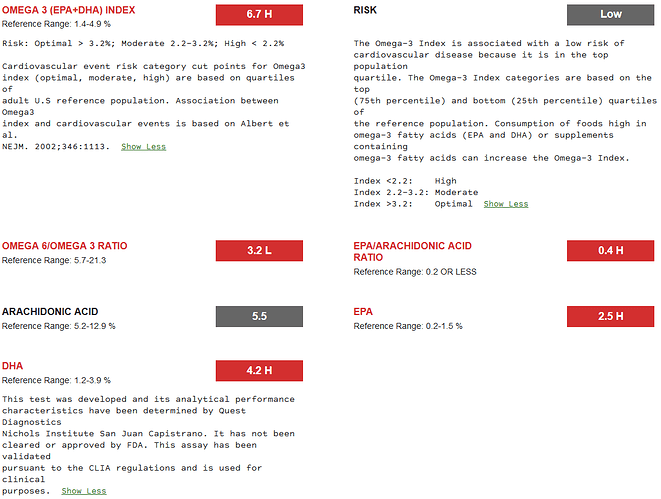 Although they are in red, those are all positive, low-risk numbers. In fact, based on these results, I’m planning to reduce the salmon oil consumption to 2 teaspoons. The inflammatory (but useful) arachidonic acid is also at a good low level.

Here is a study cited by Quest Diagnostics (paid through ultalabtests.com for $44 on sale) when they gave me the results: 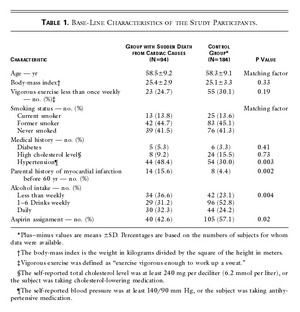 The relative risk of sudden death in apparently healthy middle-aged men (followed for 17 years) in the upper quartile was 0.10 compared to the lowest quartile, though the confidence interval was wide, from 0.02-0.48: 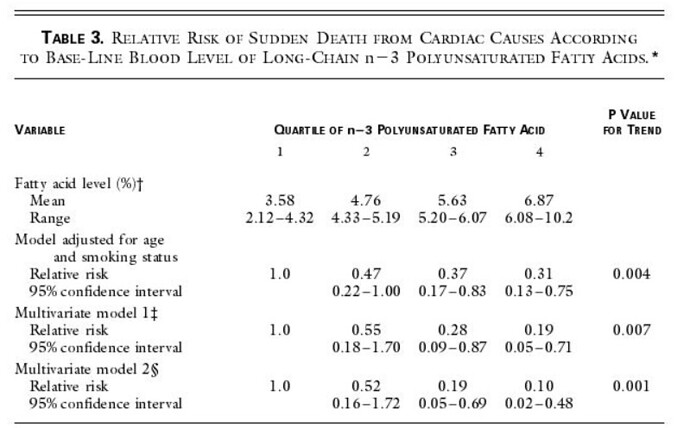 Did you test your genome? APOE4 carriers are 1 in 4 and if you are one (or worse you are homozygous in 1 in 33) - your omega 3 index from serum is inapplicable to the brain omega 3.

Unfortunately, saving the body without the brain isn’t really going to do much. That’s partly why I went so deep in brain stuff first.

23andme says I’m not a carrier

I personally used a CLIA-certified lab due to privacy concerns and more validity (although I think 23andme should be right about lack of APOE4 carrier).

Do you worry about 23andme might go bust and then sell your data? Seems like the VC funding and subsidies for cheaper testing are towards a “sell your data” model. Or did you have a workaround for privacy?

Well, so far, not a lot of clinical metric success, but they keep hacking away. Might be non ideal molecule? The turnover of DHA takes a very long time…a DHA researcher told me that eventually it gets in.

The type of DHA used in the above study:

“The study drug will be algal-derived DHA (DSM, 6480 Dobbin Road, Columbia, Maryland 21045) administered as capsules, dosed as 0.5 grams/capsule with two capsules twice per day for a total daily dose of 2 grams with meals. Algal DHA contains approximately 45% to 55% of DHA by weight and does not contain eicosapentaenoic acid.”

Algal oil is plant based not animal based: 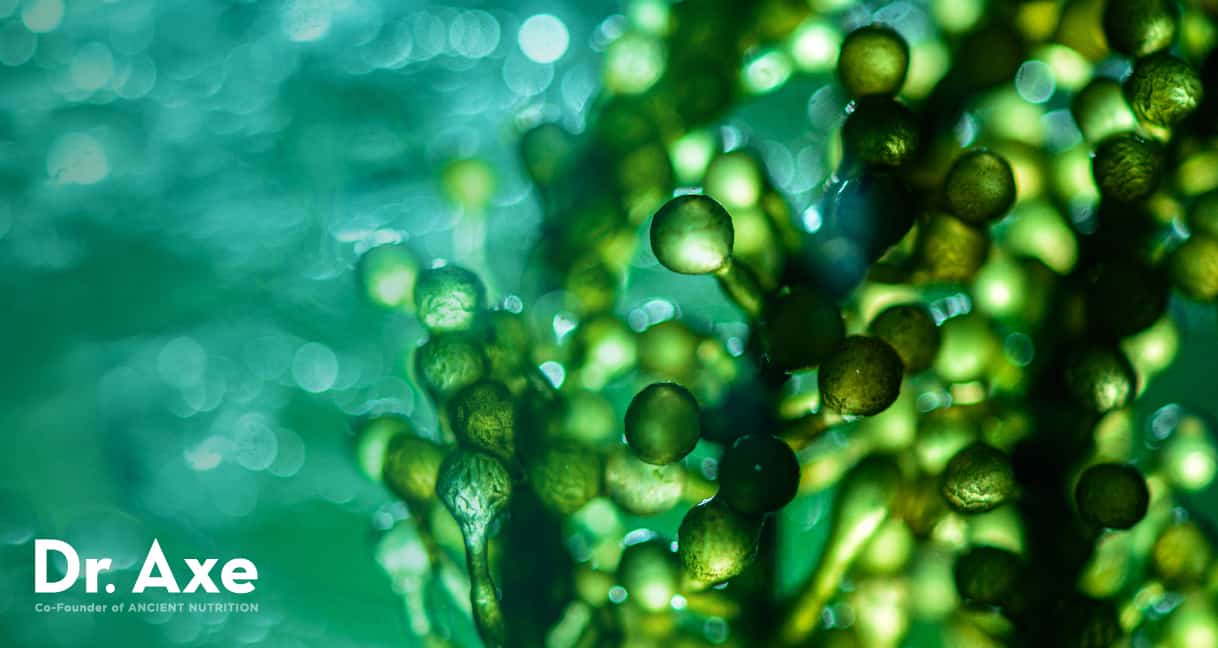 Algal Oil: A Vegetarian Source of Omega-3s and DHA

Omega-3s are crucial to our health. It turns out, algal oil is an even safer source of omega-3s and DHA than fish oil. Learn the benefits.

Healthspan Blog | Dr. Rhonda Patrick on DHA in Phospholipid form and the...

Dr. Rhonda Patrick proposes a mechanism for the phospholipid form of DHA to play a role in the prevention of APOE4-associated Alzheimer's Disease.

I added fish roe to my daily 3g DHA/EPA of fish oil. 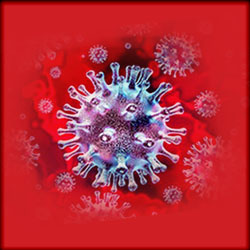 Ameliorative effect of taurine against diabetes and renal‑associated...

To develop novel therapeutic methods for both diabetic and renal disorders, scientists had initially focused on elucidating the molecular mechanisms of taurine in established cell lines and mouse models. Although a large amount of data have been...