We demonstrate that psychological factors, such as feeling unhappy or being lonely, add up to 1.65 years to one’s biological age, and the aggregate effect exceeds the effects of biological sex, living area, marital status, and smoking status. We conclude that the psychological component should not be ignored in aging studies due to its significant impact on biological age. 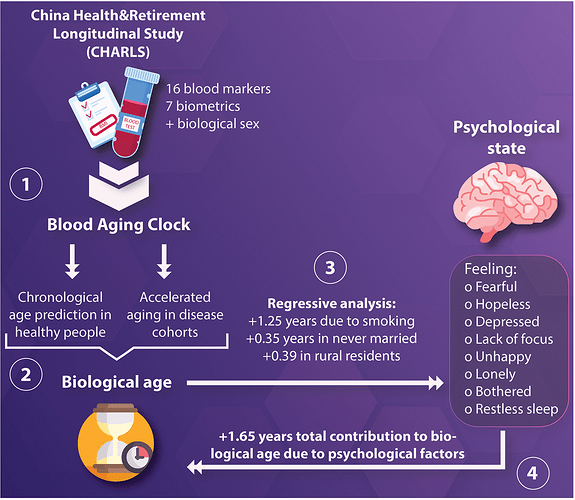 I no longer feel alone in my search for greater longevity because of all of you. So this forum probably takes a few months off my biological age! Seriously, though, the good vibes and information and care are probably improving my longevity as well. Thanks everyone for being here!

Thanks for that, but meditation and/or breathing exercises are a direct way of influencing the HPA axis and both increasing HRV and reducing levels of cortisol (which is probably one of the key issues in terms of longevity when it comes to psychosomatic effects).

Lowering cortisol then has other effects. (quite a few).

I think those are excellent ideas as well.

It’s also worth noting that it wouldn’t be surprising for this to be bidirectional. When you’re in poor health, it’s hard to do things with people, hard to want to do things with people. When someone is depressed, they often isolate and do not make social connections in the same ways that they are not doing other beneficial things for their health. It’s very easy to see this becoming a spiral. It’s good to try to shore up your physical, mental, and social health so they can support each other.

Sounds plausible, but it could also be poor health, causes one to be feeling unhappy. For example, known that after heart attacks, depression is common.

Years ago, it was thought that anybody who ran a marathon would not die from heart attack. Jim Fixx changed that thinking. Maybe 30 years ago I recall book written by MD, whom concluded it was not people who ran created healthy hearts, but rather those with a healthy heart, would run

What appears as cause-and-effect is often reversed. Or, my favorite logical fallacy: Post Hoc Ergo Propter Hoc: After this, therefore because of this.