Serum Lithium Levels: Ideal Time for Sample Collection! Are We Doing it Right?

I buy mine from Life Extension for longevity. The serving size is 1000 mcg of lithium orotate daily.

I think the serving is actually 1000mcg of elemental lithium provided as orotate.

It appears on the label this way: (as lithium orotate). So I see there’s a difference. I just didn’t know about that.

The difference is in how much of the Lithium ion there is.

Labelling is not always that clear, but you are probably taking 23.34 milligrams (give or take a few milligrams) in each capsule.

The amount of lithium in the drinking water varies from place to place on this planet. According to Japanese-German research that has been published in the European Journal of Nutrition, people live a little longer if their drinking water contains...

7UP used to contain lithium. It was called “lithiated lemon soda”.

In 1949 the Australian psychiatrist John Cade published studies that showed that lithium could be used to treat manias and stabilise bipolar disorders. [Med J Aust. 1949 Sep 3;2(10):349-52.] Cade needed much higher concentrations of lithium to do this than were found in 7UP. But when Cade discovered that even higher concentrations were toxic, the manufacturer of 7UP removed lithium from its product.

Lithium worked so well, however, that Cade initially thought that bipolar disorders were caused by a shortage of lithium. This theory led to ‘nutri-criminological’ studies which revealed that in areas where the drinking water contained more lithium there were lower serious crime rates and fewer suicides. [Biol Trace Elem Res. 1990 May;25(2):105-13.]

Tell the mayors of the cities below.

The twenty cities with the highest violent crime rates (number of incidents per 100,000 people) are:

Lithium is available in many mineral waters throughout the world and is highly bioavailable.
One brand sold in the U.S. would only require you to drink 2 liters a day for 1 mg of bioavailable lithium. Of course the other minerals could be problematic for some. Some German waters contain almost 2 mg/L 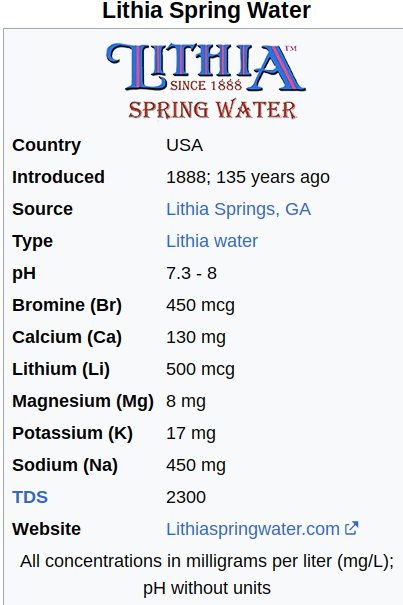 Lithium-rich mineral and medicinal waters may be an important and highly bioavailable lithium source for human consumption.

But mice die way too much of cancer, and lithium seems to act on mechanisms independently of cancer

I think the data is fairly convincing that lithium supplementation is good for your health, cognition and lifespan. I take lithium orotate every night.

Yep, I believe there was a case report in the literature involving negative effects from higher dose orotate supplement form causing a hospitalization somewhere if one wants to look into it. It appears to possibly be close to equivalent.

Frankly, I’m not even particularly convinced by the suggested effects of epi evidence for suicide prevention on microdosing lithium at 1-3 mg, but I’m not doubting a potential mood effect on even low doses around 5-15 mg.

My take is ~1 mg (spaced out in water from USP grade lithium carbonate IR, wished I had the benefit of ER version) is highly, highly unlikely to cause significant long-term harm if any, with a potential shaky benefit based on a poorly done trial at a slightly lower microdose on AD (with some lack of key details in the trial) that also used lithium carbonate. Not particularly convinced yet on it having enough empircial evidence to significantly increase healthspan or lifespan in humans at the dose I’m taking if it even has any effect in the first place, but the mechanistic gamble in this instance vs potential for harm seems okay in my personal situation.

I ordered a 1mg lithium orotate supplement to add to my stack that should arrive today. @JuanDaw I have lived in one of the cities listed in your post for the last 28 years so I suspect my intake has been low.

My post above shows cities with high crime rates per capita. The suggestion of adding lithium to city drinking water was in jest, because there is no showing that those cities’ drinking water have low lithium content. The connection is made based on the untested hypothesis of Australian psychiatrist John Cade.

This theory led to ‘nutri-criminological’ studies which revealed that in areas where the drinking water contained more lithium there were lower serious crime rates and fewer suicides. [Biol Trace Elem Res. 1990 May;25(2):105-13.]

My lithium orotate arrived yesterday, in time for my weekend dosing of kaempferol, myricetin, and lithium. I started kaempferol and myricetin the weekend past. This is for my self-experimentation of a substitute for rapamycin (or everolimus), and trametinib (a MEK inhibitor and anti-cancer), as posted below.

I ordered it before reading your post so I didn’t decide based on that but I certainly appreciate your clarification. I do believe based on what I’ve read that both places I’ve lived during my lifetime have low groundwater lithium levels.