In Search of the Holy Grail: Toward a Unified Hypothesis on Mitochondrial Dysfunction in Age-Related Diseases 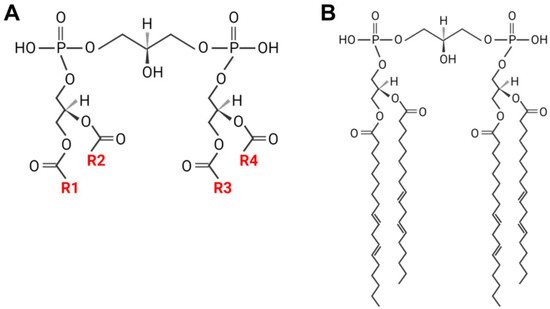 In Search of the Holy Grail: Toward a Unified Hypothesis on Mitochondrial...

Consequently, ablation or the pharmacological inhibition of ALCAT1 have been shown to mitigate obesity, type 2 diabetes, heart failure, cardiomyopathy, fatty liver diseases, neurodegenerative diseases, and cancer. The findings suggest that age-related disorders are one disease (aging) manifested by different mitochondrion-sensitive tissues, and therefore should be treated as one disease. This review will discuss a unified hypothesis on CL remodeling by ALCAT1 as the common denominator of mitochondrial dysfunction, linking mitochondrial dysfunction to the development of age-related diseases.

An inner mitochondrial membrane, the first thing that comes to mind is SkQ the “Skulachev ion”
The molecule that can carry and deliver compounds through the membrane into the mitochondrial.

SkQ1 reduces ROS production inside mitochondria in a controlled and sustainable manner.

The authors of the paper have already tested or controlled their theory extensively with model organisms and are ready to start human trials. According to their proposition, the (expression of the) gene ALCAT1 makes us old (and sick), and its inhibition protects us.

Collectively, the information presented in this review provided ample evidence that support a unified theory on CL remodeling by ALCAT1 as the root cause of age-related diseases by controlling the mitochondrial etiology of these disorders (Figure 5). Although much of the evidence accumulated thus far comes from studies on mouse models of age-related diseases, the latest development of potent and selective ALCAT1 inhibitors has made it possible to test this theory in human patients in the near future. However, a key question remains regarding whether the findings can be translated into human clinical studies; if so, ALCAT1 inhibitors could become the first drug that treats all age-related diseases as the Holy Grail.

The search is on… see this discussion on ResearchGate:

Are there any ALCAT1 inhibitors?

I am looking for (pharmacological) ways to inhibit the enzyme ALCAT1. Are there any drugs or chemicals that could do the trick?

There are many inhibitors, with references, listed here:

ALCAT1 is a polyglycerophospholipid acyltransferase potently regulated by...

Acyl-CoA:lysocardiolipin acyltransferase-1 (ALCAT1) catalyzes acylation of lysocardiolipin back to cardiolipin, an important step in cardiolipin remodeling. The present study reports the catalytic properties of ALCAT1 in vitro and its regulation by...

Recombinant ALCAT1 was potently inhibited by ADP and ATP, but not by adenosine nucleotide analogs or other nucleotides, such as UTP and GTP, suggesting that ALCAT1 does not require ATP hydrolysis for its enzyme activity.

To address this issue, we next tested the effect of A320, a potent ALCAT1 inhibitor with IC50 = 0.1 µM in a cell-based assay, on MPTP-induced motor deficits.

Using SOD1G93A transgenic mice with targeted deletion of the ALCAT1 gene and treated with Dafaglitapin (Dafa), a very potent and highly selective ALCAT1 inhibitor, we determined whether ablation or pharmaceutical inhibition of ALCAT1 by Dafa would mitigate ALS and the underlying pathogenesis by preventing pathological remodeling of cardiolipin, oxidative stress, and mitochondrial dysfunction by multiple approaches, including lifespan analysis, behavioral tests, morphological and functional analysis of skeletal muscle, electron microscopic and Seahorse analysis of mitochondrial morphology and respiration, western blot analysis of the SOD1G93A protein aggregation, and lipidomic analysis of cardiolipin content and acyl composition in mice spinal cord.

We may find a few more clues in the paper’s list of references.

This paper, and it’s outrageous title, is a troll/marketing piece. Trying to extrapolate a singular mitochondrial enzyme pathway to the “holy grail of human aging”, implicating pretty much every mortality pathway.

He’s the principal of Perenna Pharmaceuticals.

And has a patent application (March 2017 filing) on an ALACT1 inhibitor, assigned to…Perenna Pharmaceuticals. Tell me how that’s not conflicted?

Hmmm…how to get my molecule on the radar?

He writes in the conclusion: “Although the mitochondrial free radical aging theory was proposed by Dr. Harman more than 65 years ago, it has become the Holy Grail of aging research.”

The oxidative theory of aging is dead.

“Over the past eight years, our laboratory (same lab as current author, btw) has conducted an exhaustive study on the effect of under or over-expressing a large number and wide variety of genes coding for antioxidant enzymes. These data demonstrate that almost all alterations in the antioxidant system of mice have no effect on lifespan.In this review, we present the survival data from these studies together. Because only one (the deletion of the Sod1 gene) of the 18 genetic manipulations we studied had an effect on lifespan, our data calls into serious question the hypothesis that alterations in oxidative damage/stress play a role in the longevity of mice.”

I see no clinical trials specific to ALCAT1 pathway drug, yet this acyltransferase was discovered by this lab in 2004.

On ALCAT1 and cancer, the paper is largely irrelevant. I can take care of T2D and CVD thank you, but where is the deferral of cancer? Cancer is most definitely an aging related disease.

“In contrast to its projected role in metabolic diseases, little is known about the regulatory function of CL in the development of cancer. Although the dysregulation of CL metabolism has been observed in several types of cancer, much of the evidence remains correlative and ambiguous. Little is known about the potential role of ALCAT1 in promoting angiogenesis in cancer, which remains to be investigated in future studies”

Holy grail and not delay cancer?

On human neurological “In contrast to insulin-sensitive tissues, such as skeletal muscle
and the heart, TLCL is not the predominant form of CL species in the brain, representingless than 5% of the total CL”. The related passages are ALL references to transgenic mouse models, no human translation.

“Here, we show that ALCAT1, a lyso-CL acyltransferase upregulated by oxidative stress and diet-induced obesity (DIO), catalyzes the synthesis of CL species that are highly sensitive to oxidative damage, leading to mitochondrial dysfunction, ROS production, and insulin resistance.”

Insulin resistance is not a “mitochondrial causative disease”…it’s a human lifestyle induced metabolic syndrome dysfunction. We’re not trying to “cure a disease” (Type 2 Diabetes) but ameliorate metabolic carnage. So ameliorating the symptoms of T2D via ALCAT1 inhibition, like dozens of other drugs in the market, is a holy grail of aging?

The findings in the ALCAT1/obesity paper ONLY APPLIED TO MALE MICE. "Female mice were unaffected (data not shown)." And ZERO discussion as to why no impact on female mice? Exactly how does a holy grail of aging pathway only apply to males? Fail. Misogynistic chalice!

Unlike Rapamycin which universally extends lifespan in male/female mice!

In another paper, same author:

So again, a transgenic mouse model of familial ALS.

Main findings in image below, showing longevity and disease onset for transgenic ALCAT1 double ablated mice or ALCAT1 inhibition. Less than 10% impact. This is the holy grail? 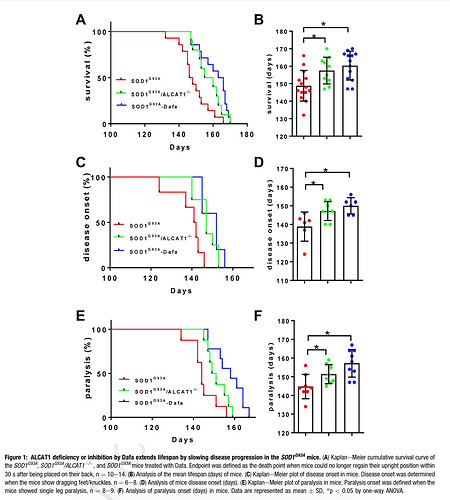 “In contrast, ablation of the ALCAT1 gene or pharmacological inhibition of ALCAT1 prevented MPTP induced neurotoxicity, apoptosis, and motor deficits. ALCAT1 deficiency also mitigated mitochondrial dysfunction by modulating DRP1 translocation to the mitochondria. Moreover, pharmacological inhibition of ALCAT1 significantly improved mitophagy by promoting the recruitment of Parkin to dysfunctional mitochondria. Together, these findings identify ALCAT1 as a novel drug target for the treatment of PD”

The “pharmacological inhibition” was via an undisclosed drug A320. In this paper, he full on discloses his conflict:

CONFLICT OF INTEREST
Y.S. is a shareholder of Perenna Pharmaceuticals Inc, a privately held
company which provided the ALCAT1 inhibitor A320 used in this
study

So I went looking for the holy grail…has this group done a study on clean ablated ALCAT1 KO mice, and looked at LONGEVITY. Now that would support the holy grail.

To summarize the “holy grail paper”, disingenuous tease, shame on the publisher, double shame author/self promoter for not disclosing conflict.

A fair amount of hyperbole in there for sure.

You make it sound like it is a mere commercial stunt. This is a peer-reviewed paper (3 reviewers): Cells | Free Full-Text | In Search of the Holy Grail: Toward a Unified Hypothesis on Mitochondrial Dysfunction in Age-Related Diseases
How is this possible?

On the other hand, Pérez’ paper on the death of the oxidative stress theory of aging doesn’t seem to have examined ALCAT1 (inhibition). The study using ALCAT1 KO mice was not a lifespan study: they had to kill their mice for getting the results they were after. For cancer, they don’t appear to have tested their theory and only rely on other works, which can indeed be labelled weak considering the boldness of their claim. But all in all, this is a proposition, and the way forward is to have it tested by other labs. Or would you say it’s not worth it?

This is a holy grail forum, the longevity extension bar set by Rapamycin is very high. I don’t believe ALCAT1 inhibition is anywhere close to meeting this threshold. The claim is not supported by the evidence.