Why is growth pathways often causing faster aging? Are there any science studies in this topic which explains why this is happening or do we not know yet?

Yes - it does seem growth pathways like the IGF-1 pathway, and MTOR nutrient sensing pathway, when over-activated later in life seem to contribute to faster aging. I think this may have something to do with the hyperfunction theory of aging (which I have not yet studied in depth).

I’ve seen some data that suggests that increased “growth” takes away from the “repair” functionality:

In the present review, we discuss the potential role of the IGF-1 system in modulation of longevity, hypothesizing that the endocrine and metabolic adaptation observed in centenarians and in mammals during caloric restriction may be a physiological strategy for extending lifespan through a slower cell growing/metabolism, a better physiologic reserve capacity, a shift of cellular metabolism from cell proliferation to repair activities and a decrease in accumulation of senescent cells.

ROLE of IGF-1 System in the Modulation of Longevity: Controversies and New...

Human aging is currently defined as a physiological decline of biological functions in the body with a continual adaptation to internal and external damaging. The endocrine system plays a major role in orchestrating cellular interactions, metabolism,...

The Hyperfunction theory of aging:

Answering the ultimate question “What is the Proximal Cause of Aging?”

Recent discoveries suggest that aging is neither driven by accumulation of molecular damage of any cause, nor by random damage of any kind. Some predictions of a new theory, quasi-programmed hyperfunction, have already been confirmed and a...

Using an analogy, consider a car driving 65 miles per hour (mph) on the highway with a 65 mph speed limit. This is the normal and optimal speed on this highway, or optimal functioning early in life. Early in life, during organism growth, all cellular and systemic functions are optimal for growth (not for longevity). However, if the car exits the highway to enter low-speed streets without decreasing speed (stuck accelerator) and continues at the same speed, 65 mph becomes over-speeding, or hyperfunction. The car is bound to crash on your driveway and is destroyed by over-speeding. It has no chance to be destroyed on a molecular level by rusting. Similarly, hyperfunction causes organ damage (e.g. stroke, infarction, cancer metastasis, broken hip) and death before molecular damage (rusting by free radicals) accumulates to deadly levels [2].

And a recent podcast that covers this theory well: 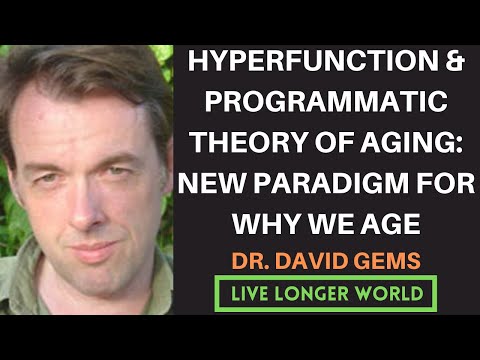