Fatty food or oil to increase the effective dose of rapamycin?

@alexchamp and I had a discussion regarding oils and a great question Alex ask was like “What is it in fatty food or oil more specific that increases the effective dose of rapamycin? Is it for example the omega 3 content or something else?”

This is a very interesting question! Because if we understand better what specific things are triggering improved absorption than probably this can also increase the absorption of other supplements, drugs and even nutrition in our food which we eat.

I know some rapamycin users take wild sardines to increase the absorption of rapamycin. Taking rapa with fatty food can increase the dose by 35% according to this study. The effect of a high-fat meal on the oral bioavailability of the immunosuppressant sirolimus (rapamycin) - PubMed

Do someone know if there are fats or oils that are better than other in increasing the absorption?

OBS! People like Alan Green and Mikhail Blagosklonny don’t recommend using fats or grapejuice for increasing the dose. One reason for this is that it’s hard to know what dose you get every time you take rapa. But my point with this discussion thread is more to understand the underlying mechanism behind why the absorption is increased by fatty food or oils. All feedback is welcome!

What is it in fatty food or oil more specific that increases the effective dose of rapamycin?

Interesting question… I think we need to dive deeper into the research papers to understand that. Here is the full paper that you linked to in the previous post above:

It has been shown that a high-fat meal in stable renal transplant patients increased the oral-dose AUC of cyclosporine from Sandimmune® by 26%.17 A comparison of the affect of a high-fat meal on cyclosporine dosage forms in renal transplant recipients revealed that the cyclosporine oral-dose AUC was further increased by 22% after switching from Sandimmune® to Neoral®.18 It has been suggested that the increased absorption of cyclosporine may be partially due to an effect of dietary fat on intestinal metabolism.19 By contrast, a moderate-fat meal in liver transplant patients decreased the oral bioavailability of tacrolimus by 27%. The purpose of the pharmacokinetic study described in this paper was to assess whether administration of sirolimus with a high-fat meal would alter its oral bioavailability.

After an overnight fast, each subject either ate a high-fat breakfast over a 20-minute period or continued to fast, as determined by a randomization schedule. The breakfast consisted of two eggs fried in butter, two pieces of bacon, two pieces of toast with butter, 4 ounces of hashed brown potatoes cooked in butter, and 8 ounces of whole milk. 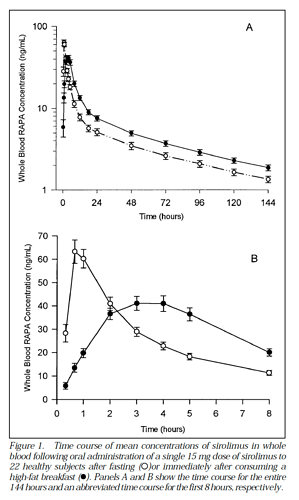 Sirolimus is similar to tacrolimus in chemical structure, and these two compounds also resemble each other with respect to some pharmaceutical and pharmacokinetic characteristics. The similarities include high lipophilicity, very low solubility in aqueous media, and high B/P ratio.

This study showed that administration of sirolimus following a high-fat meal slows the rate of absorption and modestly increases the extent of systemic bioavailability from a nonaqueous oral formulation. In the case of tacrolimus, a 71% mean decrease in Cmax and a 39% mean decrease in AUC0-t was observed when the marketed capsule formulation was administered immediately following a high-fat meal relative to when it was administered in the fasting state.

A variety of mechanisms have been invoked to explain an increase in the extent of oral availability
when a compound is administered with food. Food-induced delays in gastric emptying and a slower input rate into the proximal intestine may prevent saturation of absorption mechanisms, particularly if there appears to be a local absorption window. Both dietary fats and food-stimulated secretions such as bile salts may facilitate solubilization and dispersion, particularly of lipophilic compounds. Increases in sphlanchnic blood flow and competition by food components for metabolic enzymes may reduce the extent of first-pass metabolism.

In the case of sirolimus, food did not alter elimination, as shown by the absence of an effect on the terminal disposition half-life (Table I) and the strikingly similar postabsorption profiles in the presence and absence of food (Figure 1, panel A). The 35% increase in systemic availability of sirolimus was probably due to some combination of facilitated absorption and inhibition of CYP3A4 and P-gp in the intestine.

Related Papers referenced in the above paper:

The effects of food on drug bioavailability

The effects of food on drug bioavailability.

The influence of food on the absorption and metabolism of drugs: an update

I’m not the smartest guy in the group, but my simple logic says that sirolimus is not soluble in water, but it is soluble to varying degrees in different types of oils such as oleic acid which would make it more available for the body to absorb. This article may be of some help: Optimized formulation of solid self-microemulsifying sirolimus delivery systems - PMC

So, people without a gallbladder may not get this advantage? Just a thought. I believe oils of medium chain length - like coconut oil, do not require bile and better for people s/p cholecystectomy?

@Jay I found out quickly, I was not the smartest guy in the group and exactly why I love this forum!