I find this interesting:

New Paper: The soleus muscle in the calf, though only 1% of your body weight, can do big things to improve the metabolic health in the rest of your body if activated correctly.

Marc Hamilton, professor of Health and Human Performance at the University of Houston, has discovered such an approach for optimal activation – he’s pioneering the “soleus pushup” (SPU) which effectively elevates muscle metabolism for hours, even while sitting. The soleus, one of 600 muscles in the human body, is a posterior leg muscle that runs from just below the knee to the heel.

Published in the journal iScience, Hamilton’s research suggests the soleus pushup’s ability to sustain an elevated oxidative metabolism to improve the regulation of blood glucose is more effective than any popular methods currently touted as a solution including exercise, weight loss and intermittent fasting. Oxidative metabolism is the process by which oxygen is used to burn metabolites like blood glucose or fats, but it depends, in part, on the immediate energy needs of the muscle when it’s working. 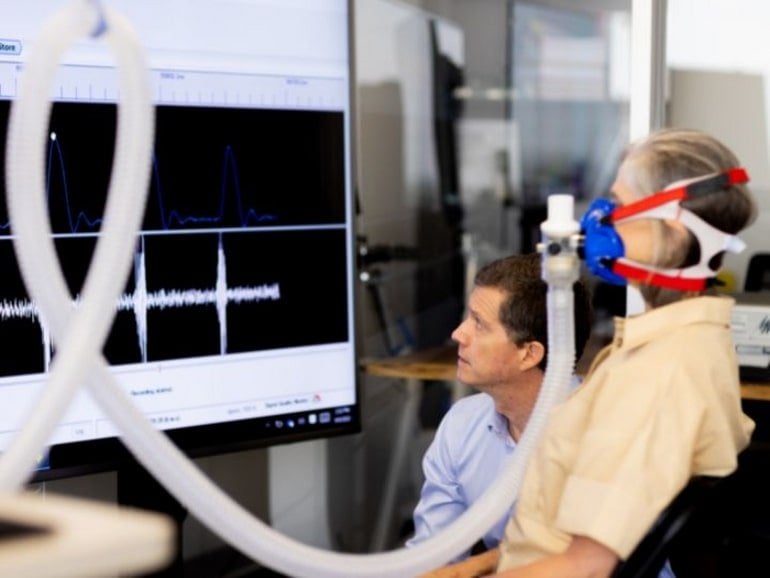 ‘Special’ Muscle Can Promote Glucose and Fat Burning to Fuel Metabolism for...

The pioneering "soleus pushup" effectively elevates muscle metabolism for hours, even when sitting.

A potent physiological method to magnify and sustain soleus oxidative... 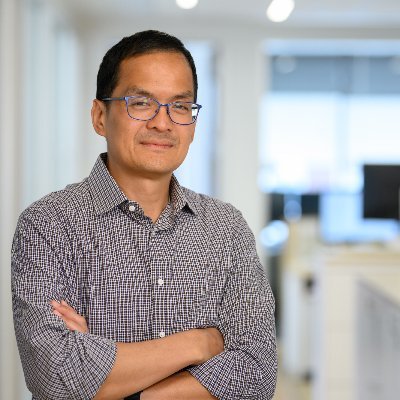 @YinPD
2/ The soleus (calf) muscle has unique anatomic (fiber type), and metabolic (preference of circulating fuels such as glucose/triglycerides rather than stored glycogen) properties when compared to other muscles in the body, including the gastrocnemius (another calf muscle).

@YinPD
3/ Despite its relatively small size (1% body wt), soleus uses disproportional amount of circulating fuel when activated in the right way ("soleus push up"). This leads to a meaningful improvement in glucose and insulin levels following a glucose challenge. 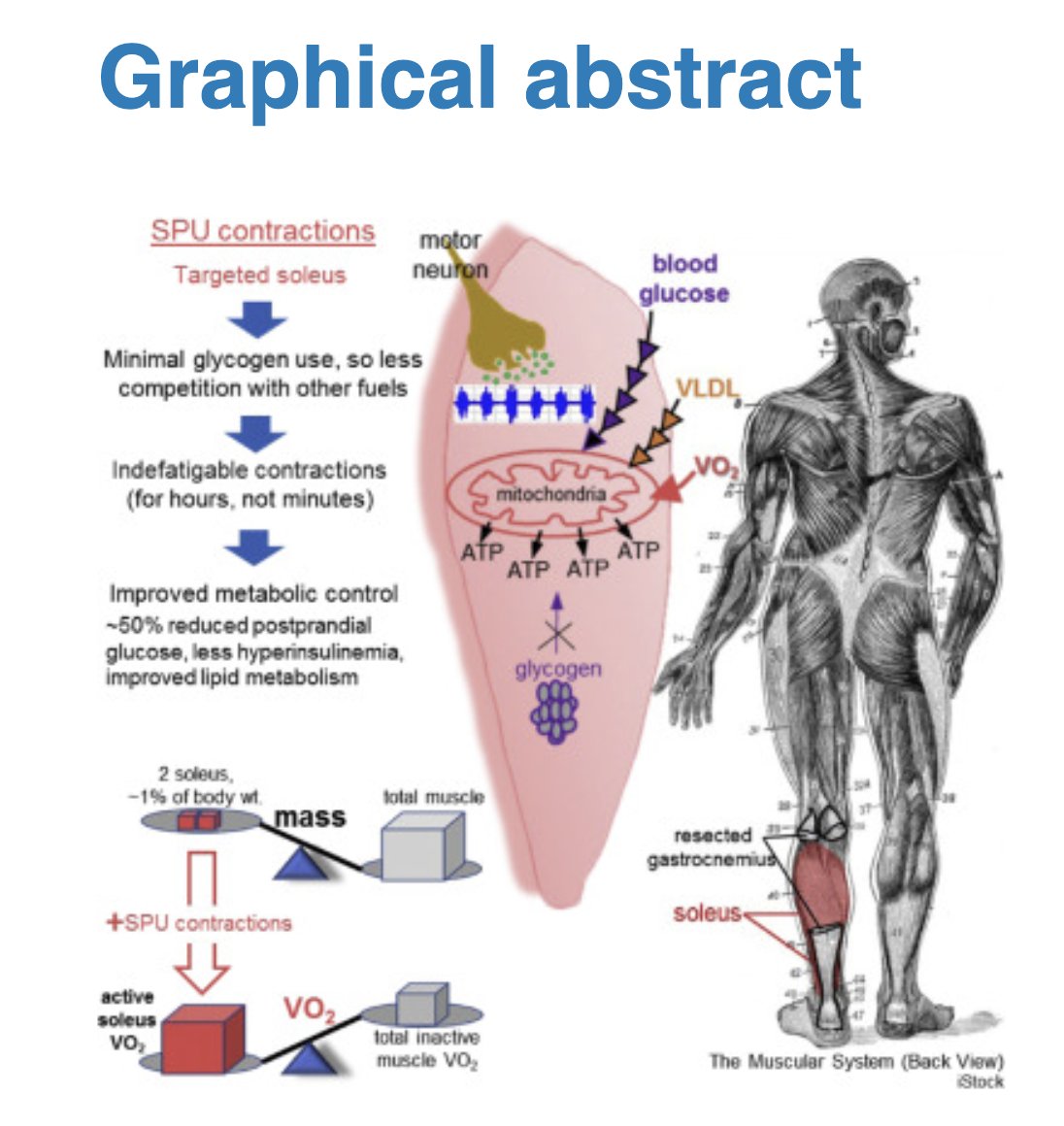 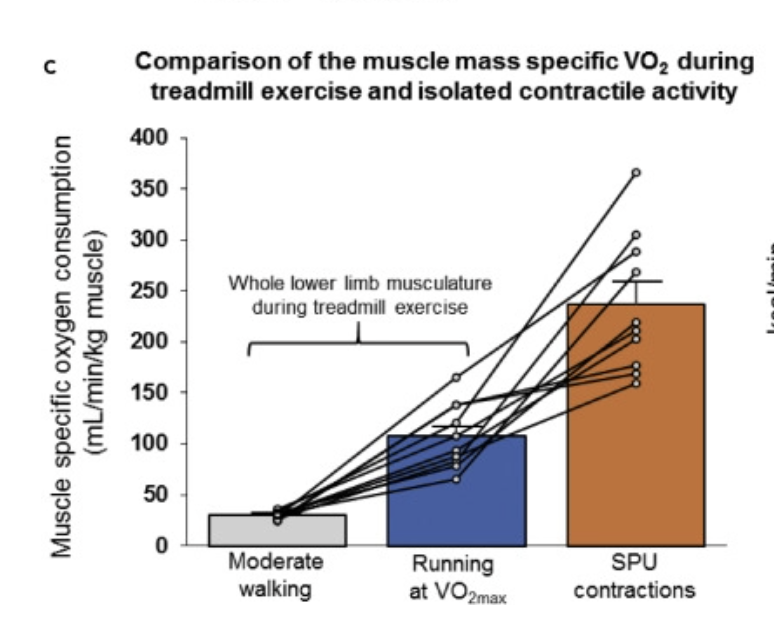 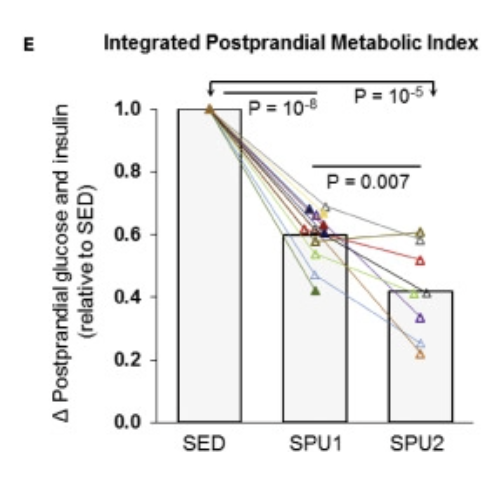 I seldom used the plate loaded seated calf raise machine at the gym. I have deliberately depleted glycogen stores by combining a fast with barbell squats and a bicycle ride. A better approach might be one hundred seated calf raises followed by a bike ride. Even if soleus exercise burns blood glucose, one would still need to deplete liver glycogen to get to ketosis.

I use the seated calf raise at the gym but I control the eccentric (lowering) of my heel where in this video the subject let’s the heel drop without resistance. I wonder if that makes a difference.

My understanding is that this “soleus pushup” done in the study has to be done in a very specific way AND for hours throughout the day to see the benefits noted, correct?

That was my understanding as well. The standing calf raise is not as effective as the seated exercise–the knee must be bent. To burn up much of the bloodstream glucose would take a while. Sitting for hours with a 45 lb barbell on my knees while reading a book does not sound like much fun and might produce serious soreness. It is interesting that different muscles prefer different fuels.

On a quick look at the videos and readily available articles, I haven’t (as of yet) come across how much of this one would need to do on a daily basis. The movement appears unloaded. No resistance or weights.

Reps?
Sets?
Can on do both legs at once?

The monitor in the video looks like it provides feedback which the exerciser uses to time the movement.

The question becomes, whether one can approximate the optimal conditions without all the equipment.

Alternatively, can one get the sensors?

Has anyone actually found out more?

I’ve been doing the soleus push-ups now for 2 weeks and have lost 2 lbs without changing anything else.
I do them right after eating and also in between meals.
No added resistance is needed.
Range of motion to 30 degree angle is important, much more than repetition.
Do both legs at once from sitting or standing with knees bent.

Regarding range of motion - Assuming 30 degrees of the sole of the foot with respect to the floor, do you understand the 30 degrees as the definitive target, minimum, or maximum?

At first I was making the mistake of concentrating on repetitions, so I would do 100-200 at a time for about 1000 a day total.
I then found out indirectly from the authors that range of motion was the most important factor, not rate.
So now I make sure that my knees are bent over my toes and I slowly go up at least to 30, and probably more like 45 degrees, sort of like a ballerina. I hold at maximal contraction for a second or so. It’s important to bend your knees properly to isolate the soleus muscles or your gastrocs will do most of the work.
You’ll be able to feel the burn at the lower part of the calf region near the Achilles. Might only require 25-50 reps at a time. I probably do it with meals and then almost hourly. No big deal.

Yes, very interesting.
This appears to be the “standard” type of calf raise used by bodybuilders, generally with a slight twist of possibly also holding some dumbbells.

We have some weight-resistance members. Correct re calf raises & article? – I see many have already answered in affirmative.

Related, I’ve used Power Plate, a vibration exercise plate one stands on, for 20+ years, that easily adapts for calf raises as well. Russians originated the basic technology for use in their space program. The Science Behind Power Plate

The advantage of Power Plate re calf raises:
– can do both leg / calves at once;
– knees should always be slightly bent on Power Plate’
–all exercise on Plate is = about 3 x non-plate, so 5 min = 15 minutes, etc.

I seem to recall that all of the “Blue Zones” in the world where people are reputed to live long lives are hilly. I remember hearing someone suggest in a documentary that perhaps constant walking up and down hills contributed to long life. Maybe, the “soleus muscle effect” is an explanation for this.

I remember commercials on TV attributing the very long life of Soviet Georgians to eating yogurt. They lived in mountains and spent lots of time walking. News reports claimed many of the Georgians lived well into their 100s… except!

It came out that living at altitude and constant exposure to the sun aged and wrinkled their skin.
Georgians, apparently independently minded, would name their male children after their grandfathers.

Before the Soviet era and well into it, when Czarist or Soviet officials came to their villages to recruit or draft men to fight in some war, they just claimed the young men (with their weathered faces) were there fathers of grandfathers.

Stair climbing also uses the soleus and look at its impact on diabetes risk. 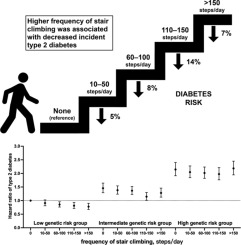 Stair climbing, genetic predisposition, and the risk of incident type 2...

When sitting, I sometimes enjoy being jittery, with my calves jigging up and down at 2-3 Hz (when no one is around to be bothered by it!) The article seemed to favor slower contractions, but I have wondered whether this might be effective as well…and I would have a good excuse for my annoying behavior.

Much of the long-lived Soviets were identified as a fraud. Often children took over the identity of their fathers, in order to receive various Gov’t supplemental incomes.

One of the chief researchers of blue zones told this story. He went to a village and interviewed a man who claimed to be 124. He returned the next year and spoke to the man again who now claimed to be 134. You can extrapolate from that…