Not rapamycin, but health just the same …

My question is, what is the causal relationship? Do healthier people walk faster & also live longer, or if people who aren’t healthy start to walk faster it improves their health & lifespan?
My guess, based on observing people I know, is the effect is mostly from the former, not the latter, though I also believe that trying to be more healthy does tend to produce more health. 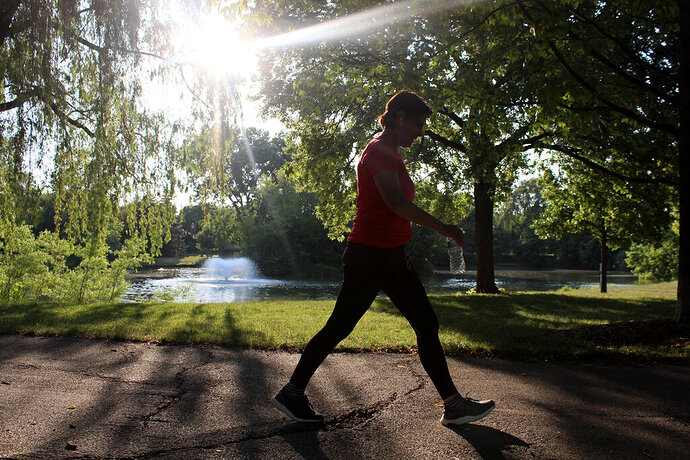 Speeding Up Your Daily Walk Could Have Big Benefits

In the largest study to incorporate activity tracker data, picking up the pace paid dividends for long-term health.

I can’t read the article because it’s behind a paywall, but I subtract my age from 180 and that is the heartrate at which I run. You should be barely able to hold a conversation.

I don’t think there is any doubt that exercise improves health. That is in a broader sense. Exercise tends to stimulate HIF 1 alpha production which does a lot of good things.

Brisk walking is an efficient type of exercise that does not mean going to the gym. In the sense that you can walk more quickly when you would be walking to get someone then it has a pro-health aspect.

Obviously healthier people can walk faster, but I would argue it is worth pushing it a bit and gradually building up walking speed.

Sorry about the paywall. Here is the part that stood out to me.

In a new study, which looks at activity tracker data from 78,500 people, walking at a brisk pace for about 30 minutes a day led to a reduced risk of heart disease, cancer, dementia and death, compared with walking a similar number of steps but at a slower pace.

They put step trackers on people & looked at how much & how fast they walked & then followed their health outcomes, finding that people who walked faster were healthier.

This is correlation. To find out if consciously upping the pace improves health, they would need to do that experiment.

I’m totally on board with the idea that exercise improves health. Maybe consciously choosing to walk down the hall faster (for example) will make a person healthier, but I suspect that the walking pace in daily life is more a comfort & habit thing & that IRL trying to walk faster around the house or office isn’t going to happen for most people. Maybe it would, but this study doesn’t show it, which is what the headline suggests.

For that matter, I know people who spend most of their lives in chairs, so any speed would be faster than normal.

This is correlation. To find out if consciously upping the pace improves health, they would need to do that experiment.

You are right, but the evidence for exercise improving health is in other papers and walking is exercise. However, this paper does not say walk faster to life longer. It says people who walk faster also live longer.

The recent paper looking at predictors of longevity identified physical ability as a key short term predictor of mortality (people who were physically frail were more likely to die). Not exactly rocket science, but it provides lessons for life.

Yep, I was just triggering on the disconnect between the headline & the contents, coupled with my observations of people I know.
It would be useful, mho, to know if people can learn to walk faster, as part of their normal activity & if that would improve health. The people who write the software for the smart watches can certainly track the speed & could use it to nudge people to walk faster.
Setting up the experiment to encourage faster walking & then tracking to see if in the first place, (some) people do change their pace & then, if they do, it improves their health outcomes would be interesting, but could be expensive.
Thanks …