I want to be data driven about the effects of Rapamycin (and my other longevity regiment, Metformin etc). I had a ‘before’ blood work run the day before I started. I did Dr Green’s recommended panel 561 Insulin, 10231 Comprehensive Metabolic Panel, 496 Hemo A1C, 7600 Lipid, 6399 CBC, 83540 Ferritin. I also sent to Insidetracker.com for their algorythm. How often do folks check? After 3 mo? After 6? 1 yr? Also any other tests folks got value from?

I do it every three months. Walk-in-Lab offers tests you can’t get directly from Quest and it is a little cheaper, i.e., CBC, Quest direct $29, Quest CBC from Walk-in-Lab $25.
I use Quest because they are closer to me and a little cheaper for some tests. I usually get a; Cholesterol (Lipid) Panel with Hemoglobin A1c, CBC (INCLUDES DIFF/PLT), and CRP Inflammation Marker (High Sensitivity CRP).
I get the CRP because it is needed to calculate “Mortality Score and Phenotypic Age. Author: John G. Cramer”
Link to the age calculator that Michae Lustgarten uses:
Levine's Phenotypic Age - Biohack Stack

An epigenetic biomarker of aging for lifespan and healthspan - PubMed 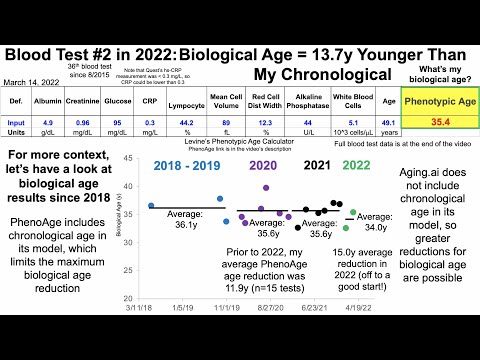 Good for you, you are obviously doing something right.

I had all the tests you listed and many more before starting the sirolimus/metformin protocol. Insurance paid for the basics- CBC, basic lipid panel. etc, but the additional tests I wanted (not paid for by insurance) were done through Ulta Labs, because I found that they have the best prices, and all the tests I wanted. Total was >$700, which is why I will retest at 1 year for those tests not paid for by insurance. The exception is Hba1c which I will retest every 3 months.

What were the additional tests that you took beyond the CBC, lipid panel, etc.?

I do a CBC and CRP test every 3 or 4 months or so to track my Levine Phenotypic Age.

The additional tests I had were: ADMA/SDMA, Apolipoprotein Evaluation Cardio IQ, Direct LDL Cardio IQ, HgbA1C, hs-CRP,
IGF-I, Insulin, Interleukin-6 Highly Sensitive, ELISA, Lipoprotein (A), Lipoprotein Fractionation Ion Mobility Cardio IQ, proBNP, N-terminal, Troponin I, Tumor Necrosis Factor-Alpha, Highly Sensitive
Skepticism of the “basic” tests drove me to research further. I am 61, and after the Levine Phenotypic Age test scored my age at 23, I was very skeptical of it. Also, these tests were always normal BEFORE my mother started chemo, yet she was already STAGE 4 BC! After listening to numerous podcasts with Peter Attia - mostly because of the medical doctors he interviews- I understood how critical cardiovascular health is, as well as being more within our control than, say, cancer. The list of tests I compiled was based on the markers which Attia’s guests mentioned. Unfortunately, these tests painted a very different picture than the Levine Phenotypic Age, ie., my cardiovascular system is definitely that of 61. I would not have known the real condition of my CV health based on the “basic” tests, including the imaging tests- ekg, etc.

I too am highly skeptical of the Levine Phenotypic Age Test. There are just too many factors it doesn’t account for. I will not reveal my Levine Phenotypic Age Test results. Let’s just say I don’t feel anywhere near as young as the test would indicate. Yes, I know it’s a phenotypic age test, but still, I think the results are highly misleading. At this point, the thing I really care about is how good I feel and how active I can be.

In your profile on here it says you are in 71 to 75 age catagory…here it appears you are in let 40’s. Is the profile incorrect or is this.