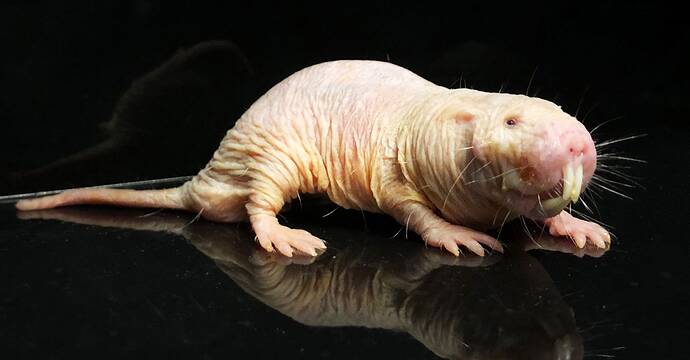 These death-defying rodents do not age normally. Will their weird biology help extend human life spans, or are those ambitions a dead end?

“All mammals, including people, naturally make this protein, but Buffenstein recently found that the naked mole rat version is more active, either because it’s more abundant or better at binding. Drug developers have also noticed that NRF2 is involved in medications approved to treat specific diseases. For example, metformin, a diabetes drug, also activates NRF2 and is being studied for anti-aging. Rapamycin, an immunosuppressant prescribed after organ transplants, activates NRF2 and extends life span by about 25 percent in male and female mice. Clinical trials are underway to test it against human aging. Perhaps NRF2 helps mole rats escape the onset of multiple aging-related diseases simultaneously.”

Here they link Rapamycin and metformin to NRF2. Also, Astaxanthin which the ITP has said is very promising also affects NRF2. Could it be that this is the key to our aging and why Rapa, metformin and ATX work?

You’ve got to love the NMR. Lives and thrives in sewer- like conditions.

People have been interested in the benefits of upregulating NRF2 for some time now. Cruciferous vegetables are a good bet, especially broccoli sprouts.
I’m looking into the possibility of broccoli sprouts in powder form.

Broccoli sprouts are the immature version of broccoli, or you are talking about the top part of the full grown broccoli stalk? Why is one better than the other?

The sprouts deliver more sulforaphane. You can grow them yourself but it would be easier to get the powder if it works the same.

As you can imagine, the aging signature is incredibly complex genetically, with a myriad of pathways. The NMR stands out for an enriched set of positively selected genes (PSG’s) for anti-aging, and mTOR is HIGHLY implicated.

“To gain new insights into genetic mechanisms determining mammalian lifespans, we obtained genomic and transcriptomic data from 17 rodent species and scanned eleven evolutionary branches associated with the evolution of enhanced longevity for positively selected genes (PSGs). we found the PSGs to be enriched for genes known to be related to aging. Among these enrichments were “cellular respiration” and “metal ion homeostasis”, as well as functional terms associated with processes regulated by the mTOR pathway: translation, autophagy and inflammation. Regulation of mTOR- and downstream processes show signs of positive selection leading to enhanced longevity. Remarkably, among PSGs are RHEB, a regulator of mTOR, and IGF1, both central components of aging-relevant pathways” 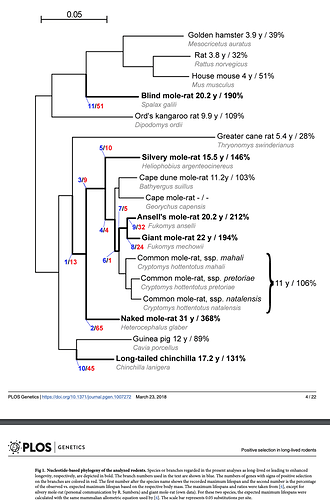 "In addition, we recently observed that PSGs in short-lived and fast-growing killifish were significantly more often up- than down-regulated during aging. This finding is consistent with the concept of antagonistic pleiotropy suggesting that the same genes that are positively selected for fast growth and maturation at young age are drivers of aging at old age. The antagonistic pleiotropy hypothesis is well supported, e.g. by the fact that growth rate and lifespan are negatively correlated, both between species and within many species. The result is also consistent with the HYPERFUNCTION THEORY OF AGING that suggests that antagonistic pleiotropy works via a mechanism of “perverted” growth. According to this theory the growth program that is beneficial during youth is not entirely stopped after finishing development and causes damage from that point on.

Yeah, the little creatures have built in mTOR inhibition. Like having an IV rapamycin pump. Wonder what would happen if we augmented it with some weekly rapamycin.
Maybe they’d live forever.

Get Richard Miller at the ITP to do a study with NMR on rapamcyin…the results would be enlightening either way.

It may take centuries to get results…

Haha, yeah, it might be quicker to do a human study.

It may take centuries to get results…

Probably, but I would LOVE to see how rapamycin changes the gene expression, especially positively selected genes (PSG’s) in an NMR, even without waiting for the lifespan extension results. What more could they teach us about rapamycin and inter-conected longevity pathways?