DMSO as a novel delivery system for Rapamycin

One thing that I have noticed in my use of Rapamycin is that when I dose, I get a series of rashes on the back of my hand and neck. I treat them with isoconazole, hydrocortisone and adapalene. The next morning they have faded. Then I apply @Agetron hair elixir and within an hour, the rashes flare up again and get progressively worse. Then I apply cream and they get better. However, today I did not apply the hair elixir and the rashes did not flare up.

Therefore, I am concluding that dissolving Rapamycin in DMSO may be a very effective way to have your body absorb Rapamycin by avoiding the digestive tract. This may be useful for the following reasons:

1.) You may need a smaller amount of Rapamycin than that ingested as instead of 10% bioavailability through digestion, you may obtain 50-90% through skin absorption. Therefore you would need a lot less Rapamycin.
2.) You may be able to target specific organs if you apply the DMSO Rapa directly onto the skin above the organ.

This is my current hypothesis. Unfortunately, I do not have access to Sirolimus blood testing here in Hong Kong, so the proof will require someone else to do the testing to prove whether this hypothesis is correct or not.

Skin absorption would probably not affect any changes to your microbiome. So both oral and topical applications could be mixed.

This could also be why @Agetron is getting 7X results in his Sirolimus blood tests. He could actually be absorbing the majority of his Rapamycin through his scalp!

Just my thoughts, and I may be proven wrong. I am putting it out there for consideration.

I used DMSO for quite awhile for my arthritis, this was maybe 10 years ago. In my reading at the time I’m pretty sure it said you need nearly 90% DMSO solution to drag anything through the skin. I think I saw on here somebody said the opposite. So we should resolve that difference. DMSO isn’t much fun at 90% I can tell you. I used it at that rate with Myristin mixed in and it kinda worked, but not a long term solution. It itches and burns for maybe 20 minutes. A little like IR Niacin.

This would not beat a fatty meal (think bacon and eggs like I usually have) and GFJ. Pleasant and filling and smells good.

I’m only spending maybe $8 a month now on Rapa. Is this to save money? I suppose you could buy the cheap powder, but then you have to force it through your skin with DMSO. I think the small intestine is the best. You need to make a better case.

It wouldn’t be hard though to mix up a batch, rub it on your skin and have your blood tested in a couple hours. Hundred bucks tells you how well it’s absorbed.

The only reason I mention it is the flare-up of the rashes, which tells me that my body is keeping its Rapamycin level at a high dosage similar to when I take my 3 mg + GFJ weekly. However, I have only dissolved 3 mg in the DMSO and I use it over the course of a month and a half. That led me to think that it might have more bioavailability through skin absorption. It could also be that it is mixed with a Minoxidil solution along with Metformin and Finasteride and that could help as well. It’s an observation (n=1).

Something to think about on a Wednesday morning. And something to pursue if anyone is so inclined.

I think the biggest implication for me is that I can’t use the hair tonic and take Rapamycin at the same time. And just when I was starting to get decent hair growth!

So this rash only happens when you have just taken Rapa and are therefore “full” anyway? When you use the hair stuff a week later nothing happens, right?

It also occurs when I apply the hair tonic. I was applying daily, and the rash was intensifying after application

Are the rashes you get from oral rapamycin and topical/head/hair rapamycin in the same locations on your body, or are the topical / head applications of rapamycin formulation causing a rash on your head where you apply the cream?

They are the exact same locations. Always. The only thing that changes is the redness. Even when ‘fully’ healed, you can tell that the skin is rough and abnormal compared to the skin around it. There are no rashes on my head as far as I can tell. Only the neck and back of the right hand. It’s the same patch every time. 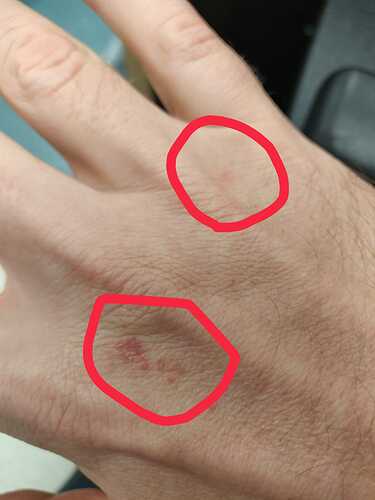 This is right now in a semi-healed state.

Any advice on how to permanently resolve this would also be appreciated!

Well - I think if you used Transcutol instead of DMSO in your topical formulation that you would stop getting the rash when you apply it to your head. Transcutol helps penetrate the skin, but from the study referenced in the “rapamycin for aging skin” thread, it suggested that they could detect no rapamycin on the blood stream when applied topically.

I know that DMSO is much more powerful in this respect (skin penetration).

Let us know if you try this approach, and its results.

Here is some information on Transcutol and DMSO I posted in the Hair/head thread:

Guys, just a little information I saw recently in a book on cosmetic dermatology that covered the excipients like transcutol and DMSO. See the bold comment on DMSO below. Here is an excerpt:

In this section, the influence of PEs on the diffusion coefficient and solubility of the active in the stratum corneum is evaluated. The use of topically applied chemical agents (surfactants, solvents, emollients) is a well‐known technique to modify the stratum corneum and also modify the chemical potential of selected actives. Collectively, these materials can be referred to as PEs. Based on the chemical structure, PEs can be categorized into several groups such as fatty acids, fatty alcohols, terpene fatty acid esters, and pyrrolidone derivatives [13]. PEs commonly used in skin care products have well‐known safety profiles but their ability to enhance penetration of an active is challenging because of the manifold ingredients used in many formulations.

They are also known as absorption promoters and accelerants which are “pharmacological inert, nontoxic, nonirritating, nonallergic, rapid onset of action, and suitable duration of action, inexpensive and cosmetically acceptable [14].” A number of solvents (e.g. ethanol, propylene glycol, Transcutol® [Gattefossé, Saint‐Priest, France], and N‐methyl pyrrolidone) increase permeant partitioning into and solubility within the stratum corneum, hence increasing KP in Fick’s equation (equation 9.1). Ethanol was the first PE cosolvent incorporated into transdermal systems [15]. Synergistic[…]” “Synergistic effects between enhancers (e.g. Azone® [PI Chemicals, Shanghai, China], fatty acids) and more polar cosolvents (e.g. ethanol, propylene glycol) have also been reported suggesting that the latter facilitates the solubilization of the former within the stratum corneum, thus amplifying the lipid‐modulating effect. Similarly, solvents such as Transcutol are proposed to act by improving solubility within the membrane rather than by increasing diffusion. Another solvent, dimethylsulfoxide (DMSO), by contrast, is relatively aggressive and induces significant structural perturbations such as keratin denaturation and the solubilization of membrane components [16]. Table 9.2 is a list of the more commonly utilized chemical PEs.” 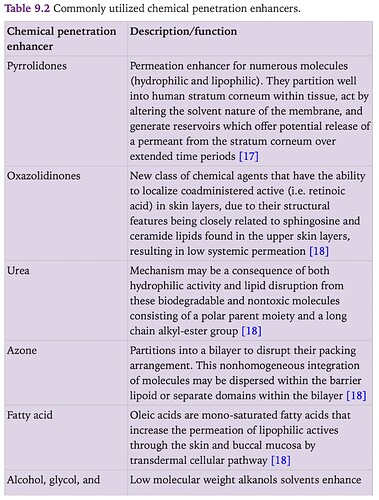 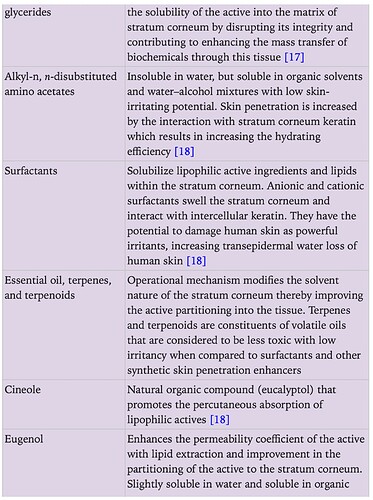 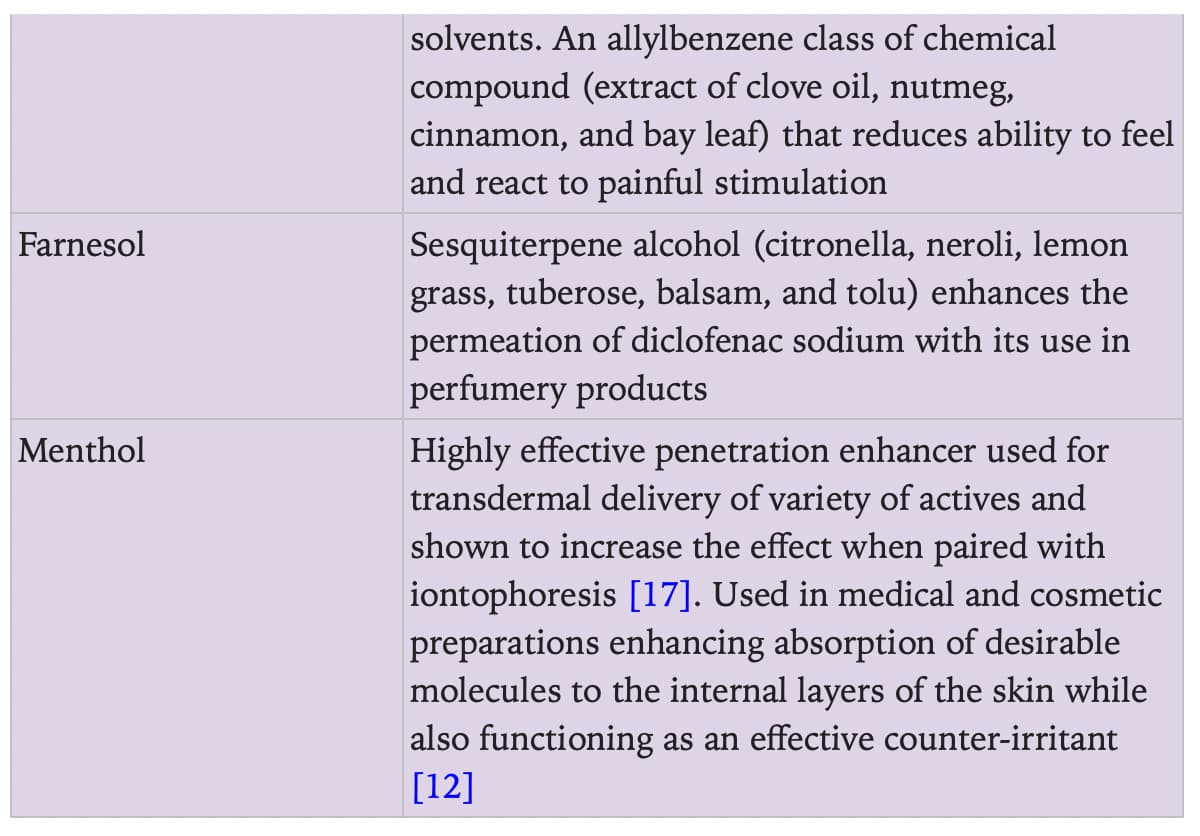 Thanks. That’s great information. It would probably be best to use transcutol from now on instead of the DMSO. I didn’t realize how damaging it could be to skin. The great thing about this forum is that sometimes we can find out about the things we are doing incorrectly and change them. Thanks again.

Would the Rapamycin, Metformin, EPCG and Finasteride dissolve in the transcutol properly?

This could also be why @Agetron is getting 7X results in his Sirolimus blood tests. He could actually be absorbing the majority of his Rapamycin through his scalp!

For example. it is reported that If you take 2.5 mg minoxidil pills and use 2% liquid minoxidil on your scalp you can overdose and get a variety of reactions - some related to B/P and heart.

I guess one way to look at the rash is that it is a gift from Mother Nature. I have a built-in Rapamycin indication meter!

I think there is an issue with using concentrated DMSO which is less of an issue when diluted but i dont have any references to cite off the top of my head.

Quick update: I stopped rubbing in the tonic with my right hand which had the rashes, and the rashes have not come back on that hand. The neck rashes still intensify when the hair tonic is applied. So, the effects do appear localized.

Interesting. DMSO is quite bioactive itself in various odd ways.

This has been discussed back in June, 2022. Review;

I posted a copy of a medical book on DMSO on another thread, book titled; “Dimethyl Sulfoxide (DMSO) in Trauma and Disease” by Stanley W. Jacob Go to See posting 16, the link to the upload book